As per the district administration order, the hospitals will be handed over to the Chief Medical Officer, Bhilwara district with immediate effect

Five private hospitals in Rajasthan's Bhilwara district have been acquired by the district authorities with immediate effect. The acquisition was done by the order of Bilwara District Collector under the Rajasthan Epidemic Diseases Act 1957.

According to the district administration order, the hospitals will be handed over to the Chief Medical Officer, Bhilwara district with immediate effect. Guest houses and resorts are also being acquired by the state government to prepare for an influx of patients in the event of an outbreak. 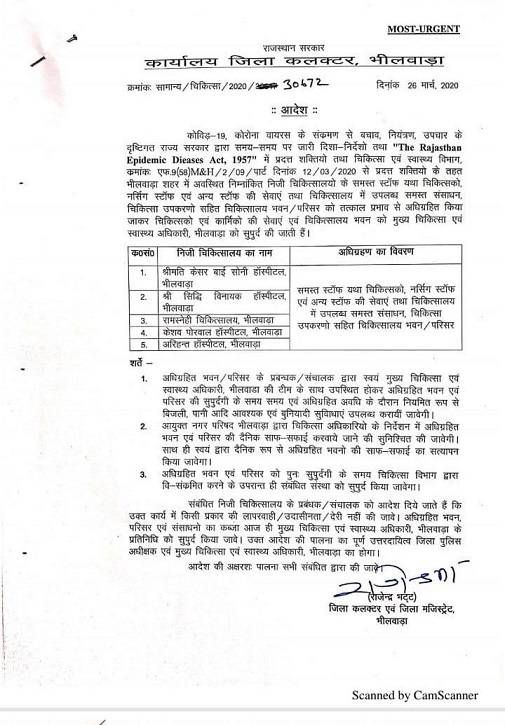 Bhilwara has become the epicentre of Rajasthan's coronavirus outbreak after 14 cases reported from a private hospital in the city. The state's medical team is yet to find the source of infection in the first case.

Rajasthan has been under lockdown since March 22. The total number of positive cases in the state have risen to 43 after two positive cases, including one each in Jaipur and Jhunjhunu that have been found today.

The local authorities, however, did not attribute death of the septuagenarian patient directly to coronavirus infection. "A death has occurred but the patient was in coma due to kidney failure and diabetes before coronavirus spread in Bhilwara. So, it would not be appropriate (to say) that he died of COVID-19 as the death occurred due to pre-existing diseases," Additional Chief Secretary (Health) Rohit Kumar Singh reportedly said.

On Monday, state health minister Raghu Sharma had confirmed that community transmission has started in Bhilwara and Jhunjhunu.