In Q3, economy stepped out of recession for the first time after registering negative growth for two consecutive quarters in 2020-21. Growth was recorded on record investment and government expenditure even as private expenditure lagged behind amid Covid-19 curbs

The Ministry of Statistics & Programme Implementation on Monday announced the Jan-March quarter GDP data, along with full fiscal numbers. While the economy grew at 1.6 per cent in Q4, the full fiscal degrowth comes out to be -7.3 per cent. Estimates including growth rates of Q1, Q2 and Q3 of 2020-21 released earlier have been revised in accordance with the revision policy of National Accounts. The Q3 GDP growth has been revised from 0.5 to 0.4 earlier, while Q2 GDP degrowth stands at -7.4 compared to - 7.3 earlier. In Q3, the economy had stepped out of recession for the first time after registering negative growth for two consecutive quarters in 2020-21. The growth was recorded on record investment and government expenditure even as private expenditure lagged behind. Manufacturing had staged a comeback in the third quarter showing 1.6 per cent growth as opposed to 1.5 per cent decline in Q2 and 2.9 per cent contraction in the year ago period. The country had experienced one of the strictest and longest lockdowns in the world to check the spread of coronavirus in 2020. 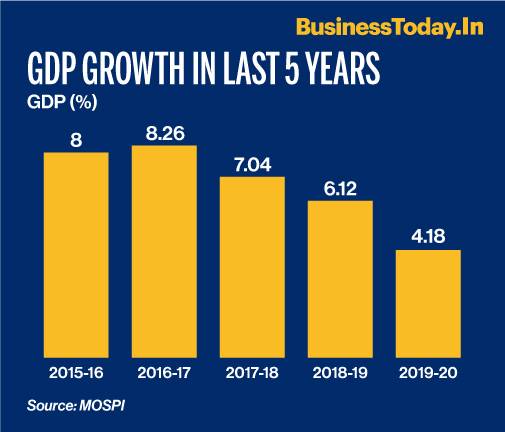 In the fourth quarter of the fiscal year, the GDP continued its positive momentum despite the Covid concerns. The finance ministry had also recently said that the ongoing second wave of the Covid-19 pandemic will have a muted economic impact in comparison to the first wave. "The second wave of COVID-19 has posed a downside risk to economic activity in the first quarter of FY 2021-22," the ministry observed in its April edition of economic review.

Also read: India's Q4 GDP to be announced today: What to expect?

The second Covid-19 wave will show real impact in the fiscal year 2021-22, suggests forecasters. While most analysts had projected a double-digit growth in FY22, albeit on a lower base, the second wave of COVID-19 pandemic and lockdowns imposed by state governments to control the surge in cases has led to revisions in growth estimates. For the first quarter of 2021-22, median forecasts by rating agencies and major economists stand at 21.6 per cent, which is lower than 23 per cent predicted earlier.