News
LATEST
Economy Politics
GDP growth at 4.5%: No, Indian economy is still not in recession, but these countries are

Q2 GDP: Some of the key economies in the world are in the verge of recession raising fears about the global economic health

Q2 GDP: A few countries including Venezuela and Argentina have seen their economy shrink in the past two years
BusinessToday.In

India's GDP growth has been recorded at 4.5 per cent for Q2 of FY20. The last time India witnessed a GDP growth of less than 5 per cent was in the fourth quarter of FY13, when it grew at 4.3 per cent. While the Indian economy is not in the pink of health, it is still slowly pacing ahead. However, amid concerns of the slowing GDP growth, it must be mentioned that India is currently facing what is known as slowdown and not what is believed to be recession.

For the uninitiated, an economic recession signifies a shrinkage in the GDP for two or more consecutive quarters, while an economic slowdown is when the GDP continues to grow but in a slower rate than the previous period in question. A slowdown is a pointer towards recession and usually precedes one but does not necessarily lead to recession.

Recession means that the country is producing and earning less than what it did before. Consumers tend to spend less as people lose confidence in the growth of the economy. Less spending means that there's decrease in demand, which, in turn leads to a dip in production. Such events also lead to lay-offs and job loss and mark a spike in unemployment.

Slowdown, on the other hand, means that production and earnings of the economy is not growing in the same pace as before.

Which countries are facing recession?

Some of the key economies in the world are in the verge of recession raising fears about the global economic health.

1. Germany: After a dismal growth of 0.4 per cent in the start of the year, the German economy shrank by 0.1 per cent in the second quarter pushing the European country into the verge of recession. There are fears that the country might fall into an official recession by the end of the year, as mentioned in a report in The Washington Post.

2. United Kingdom: The UK is facing a similar situation as Germany. Amid the uncertainty over Brexit, UK's growth was recorded at 0.5 per cent in the beginning of the year, after which it shrank by 0.2 per cent.

3. Italy: Italy's growth was recorded at 0.2 per cent in the second quarter and is likely to slip into the negative zone. This is rather bad news for a country that's been witnessing a political crisis.

5. Brazil: The South American economy shrank by 0.2 per cent in the first quarter and is likely to show negative growth in the second quarter too. Brazil's government is trying to improve the situation by announcing measures to stimulate growth.

8. Russia: The Russian economy only grew by 0.7 per cent in the first half of 2019. An economic institute warned the country that it could be in recession by the end of the year. Russia has been struggling as its oil prices nosedived and other nations put sanctions on Russia for its military actions in Ukraine. 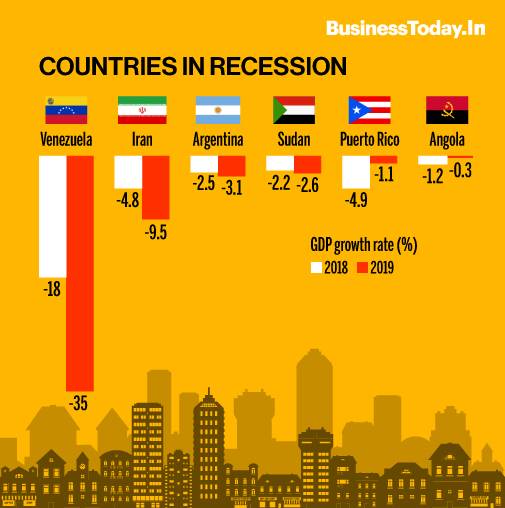 Which countries are in recession?