Per capita GDP is a measure of a country's economic output per person, that divides its GDP by total population
Manoj Sharma 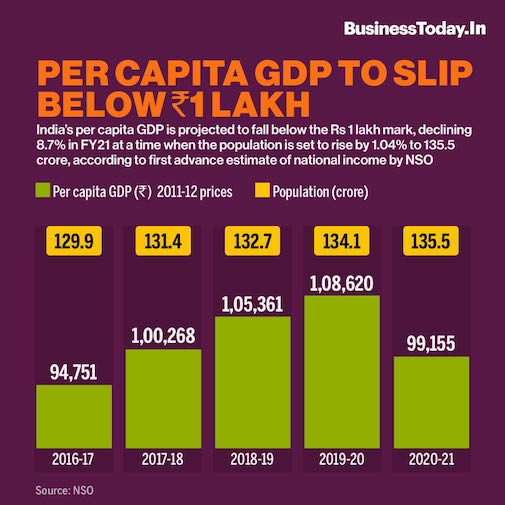 However, India will surpass Bangladesh in 2021 again by clocking 8.2 per cent rise in per capita GDP at $2,030. Bangladesh may, however, see 5.4 per cent growth.

Per capita GDP is a measure of a country's economic output per person, that divides its GDP by total population.

The fall in the per capita GDP income comes despite an estimated 1.04 per cent (over 1 crore) rise in the country's population in the current fiscal year due to the projected 7.7 pc shrinking of the economy in FY21.

World Economic Outlook data released by the International Monetary Fund (IMF) in October also projected Bangladesh to surpass India in terms of per capita GDP (at current prices) in dollar terms in 2020.

Meanwhile, the NSO has also projected that India's economy will shrink 7.7 percent in FY21 compared to 4.2 percent growth in the previous fiscal year. Almost all sectors, barring agriculture, may see contraction in FY21. The Reserve Bank in its recent estimate had also projected the GDP to contract 7.5 per cent in the fiscal year.