SBI Ecowrap report suggested that the number of subsidised cylinders per annum to households can be reduced from the current 12 to 9 (average all India consumption is 6.7 cylinders), which would be sufficient for most households

Launched in May 2016, PMUY scheme aims to create smoke-less villages across the country by offering LPG connection to the women in BPL households
Chitranjan Kumar

Given the fact that almost 96.5 per cent of households in India, as on October 2019, have an LPG connection due to PMUY scheme, an increase in liquefied petroleum gas (LPG, read cooking gas) prices might affect consumption. The beneficiaries are likely to go back to use of unclean fuel (hazardous to their health also) as soon as the free cylinders get exhausted, the report said. 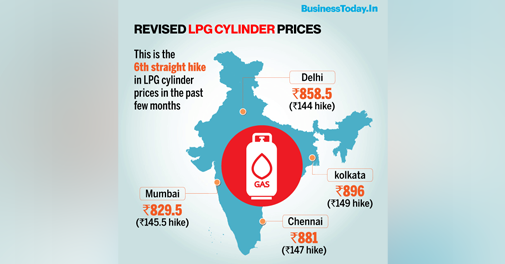 According to the SBI Ecowrap report, 54.2 per cent of total PMUY consumers consumed up to 3 cylinders in a year or more. However, logic suggests that a family of 4 requires at least 3-4 cylinders per year.

"The PMUY use among the rural households in states with low per capita income may be lower due to continuous increase in LPG prices," said the SBI Ecowrap report.

The data is based on analysis of the state-wise refill data of 5.92 crore connections installed till December 2018 since the scheme started on May 2016 and refill up to June 3, 2019 (means the connections that have completed more than one year).

SBI Ecowrap report suggested that the current loan scheme under PMUY, which allows households the option to take hot plate on purchase of first refill or both on loan basis from zero interest rate, should be phased out. This will only involve a one-time cost of around Rs 2,500 crore and will improve the cost of refilling, it said.

The report said that an increased and graded subsidy may be provided to PMUY and poor consumers which can be tapered off over a period of around four years. For this, the government can create a comprehensive merged database using databases of Ayushman Bharat, PM-KISAN, PMJDY, PMUY and MUDRA and then provide these people with maximum four free cylinders in a year.

"Even if 4 crore people are eligible for this then the total cost to exchequer per year will be maximum Rs 12,800 crore," it said. It also proposes a compulsory opt-in scheme for availing subsidies emulating nudge theory in policy making.

"The number of subsidised cylinders per annum to households can be reduced from the current 12 to 9 (average all India consumption is 6.7 cylinders) which would be sufficient for most households. Introducing mandatory standards and labelling for LPG stoves will save at least 10 per cent of the LPG consumption," the report said.

Launched in May 2016, PMUY scheme aims to create smoke-less villages across the country by offering LPG connection to the women in BPL households. Under the scheme, cash assistance up to Rs 1,600 for getting new LPG connection is provided by the central government.

Last week, the LPG price was hiked by Rs 144.5 per cylinder due to rise in benchmark global rates of the fuel. This was the sixth straight hike in LPG cylinder prices in the past few months. LPG price was increased to Rs 858.50 per 14.2 kg cylinder from Rs 714 previously, as per price notification of state-owned oil firms.

The government, however, increased the subsidy amount per cylinder to Rs 291.48 from Rs 153.86 to keep per cylinder outgo almost unchanged. For PMUY beneficiaries, the subsidy has hiked to Rs 312.48 per cylinder from Rs 174.86.  After accounting for the subsidy that is paid directly into the bank accounts of LPG users, a 14.2kg cylinder would cost Rs 567.02 for domestic users and Rs 546.02 for PMUY users.