Mukesh Ambani saw the highest jump in his net worth YTD in dollar terms. He was followed by Adani group's founder Gautam Adani whose net worth increased $5.6billion YTD.

The Bloomberg Billionaires Index which calculates the daily ranking of the world's richest people based on their net worth says it all. The index which is a dynamic measure of personal wealth shows Mukesh Ambani who is on the 20th spot saw a net worth growth of $17.4 billion, scaling 76.3 per cent year-to date (YTD). The biggest share of his net worth consists of his Reliance Industries equity.

Moreover, of the 23 Indian billionaires in the top 500 list, Mukesh Ambani saw the highest jump in his net worth YTD in dollar terms. This was followed by Adani group's founder Gautam Adani whose net worth increased $5.6billion YTD.

The next to follow were rank 47 Lakshmi Mittal and rank 61 Azim Premji whose net worth increased $5.13 billion and $5.09 billion YTD. Dilip Shanghvi , founder of Sun Pharmaceutical Industries who is ranked 120 in the list was the only Indian billionaire who saw a decline in his fortunes. His net worth declined by $955 million YTD.

Here is a look at change in net worth of the top Indian billionaires in 2017: 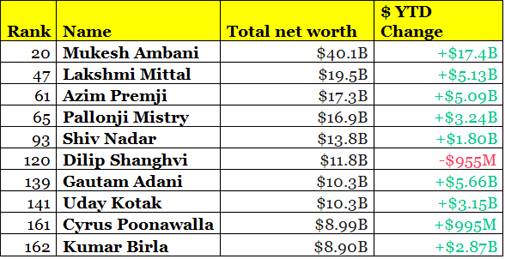 However, it is interesting to note that Radhakishan Damani, the founder of Avenue Supermarts who is ranked 244 was among the top 5 biggest movers in the top 500 list of rich billionaires in terms of per cent change YTD. Damani with a net worth of $ 6.76 billion saw a significant growth of 253.4 per cent in his fortunes YTD.