Q3 preview: The decline in revenue is largely on account of falling revenue of consumer-linked sectors, which are estimated to have contracted 1-2 per cent year-on-year

CRISIL Research expects revenue growth of corporate India, excluding banking, financial services and insurance (BFSI) and oil companies, to decline 2-3 per cent on a year-on-year basis in the third quarter (Q3) of fiscal year 2019-20, mainly due to muted private consumption and a decline in revenues of industrial and construction-linked sectors. This marks the second successive quarter of de-growth in sales after the September quarter of FY20 reported a decline of 3-4 per cent.

The CRISIL research is based on an analysis of 300 companies that account for approximately 60 per cent of the market capitalisation of the National Stock Exchange (NSE), excluding banking, financial services, insurance, and oil players. 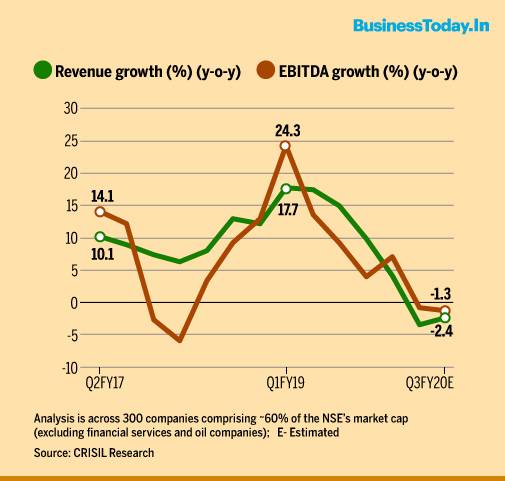 Expected revenue growth at 2-3 per cent marks a hard fall from the preceding four quarters (between the second quarter of FY19 and the first quarter of FY20) when aggregate revenue had grown 11-12 per cent on average, the report said.

The decline in revenue is largely on account of falling revenue of consumer-linked sectors, which are estimated to have contracted 1-2 per cent year-on-year. In fact, revenue of automobile companies is estimated to have posted a sharp slide of 9-10 per cent on-year. This could be attributed to muted purchase of passenger vehicles and two-wheelers, lower freight demand aggravated by the new axle norms, weak product mix and weak finance availability for commercial vehicles. In a rub-off, auto component manufacturers' revenue is estimated to have decreased 13-15 per cent amid production cuts.

Overall, earnings before interest, tax, depreciation and amortisation (EBITDA) is expected to fall 1-2 per cent year-on-year for the quarter, adding to a nearly 1 per cent drop the previous quarter. This comes despite support from telecom and retailing sectors, which are benefiting from accounting changes. Excluding these, the fall would have been sharper, at 6-7 per cent.

Among sectors, aggregate revenue of power companies is estimated to have declined 3-4 per cent, against an average of 8 per cent in the previous four quarters, due to a slowdown in power demand across regions.

Revenue of petrochemicals companies is expected to have fallen 17-19 per cent on-year due to lower realisations amid a fall in feedstock naphtha prices (around 7 per cent) as crude prices trended lower.

Construction-linked sectors are expected to log a revenue decline of around 6 per cent, because of an 18-19 per cent decline in steel products and falling realisations (flat steel prices dropped 21 per cent).

Large cement players will likely log around 4 per cent growth in revenue, primarily on account of a rise in volumes.

"For key sectors such as automobiles and steel products, EBITDA margin is expected to have declined 150-350 bps on-year, given lower utilisation and a slump in domestic realisations, respectively. Indeed, nine of 19 key sectors evaluated are expected to show an on-year drop in margins for the quarter. On the other hand, cement companies' margins are likely to have expanded 200 bps on account of improved realisations and lower power and fuel costs," said Hetal Gandhi, Director, CRISIL Research.