As per RBI's new estimate, growth in the first quarter (April-June) of 2021-22 will fall from 26.2 per cent to 18.5  per cent. This is mainly because of lockdowns in various states.

The Reserve Bank of India (RBI) has revised its real GDP projection from 10.5 percent to 9.5 percent in 2021-22 amid second wave of  Covid-19 and localised lockdowns.

As per RBI's new estimate, growth in the first quarter (April-June) of 2021-22 will fall from 26.2 per cent to 18.5  per cent. This is mainly because of lockdowns in various states. The real GDP for the second quarter (July-Sept) has been revised marginally downward from 8.3 per cent to 7.9 per cent.

The RBI now expects economic recovery to pick up momentum in the third quarter (Oct-Dec) at 7.2 per cent from its earlier projection of 5.4 per cent. The fourth quarter (Jan-March) will see a GDP of 6.6 per cent , up from 6.2 per cent forecast earlier.

The RBI's new estimate is closer to what many institutions have predicted. Global rating agency Moody's recently revised India's GDP from 13.7 per cent to 9.3 per cent. The country's largest bank, the State Bank of India's research team has forecasted a real GDP of much lower at 7.9 per cent as against 10.4 per cent projected earlier. 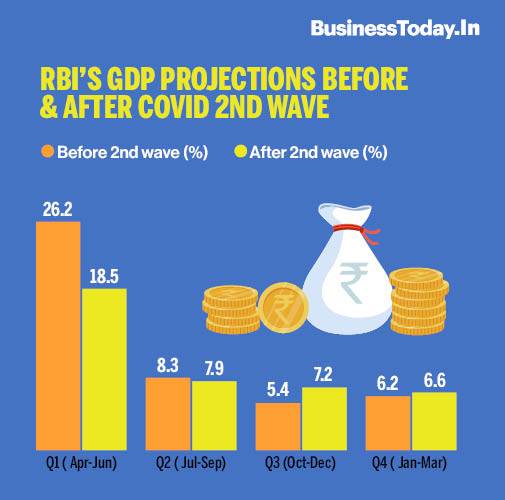 In its annual report released last week, the RBI had said that the impact of the Covid second wave is not as bad as the first wave, but said that surrounding uncertainties remain. "The prospects for the Indian economy, though impacted by the second wave, remain resilient, backed by the prospects of another bumper rabi crop, the gathering momentum of activity in several sectors of the economy till March, especially housing, road construction, and services activity in construction, freight transportation, and information technology," states the annual report.

The Union Budget 2021-22 had earlier projected a nominal GDP of 14.4 per cent, which is real growth plus inflation. If one takes the average inflation of 5 per cent, the real GDP comes out to be 9.4 per cent. The RBI's revised projection is now closer to the budget estimate. The RBI has upped its inflation projection from a tad below 5 per cent to 5.1 per cent in 2021-22.

The Economic Survey had earlier projected a much more optimistic real GDP estimate of 11 per cent in 2021-22. This estimate was made when the Covid first wave was  under control and there were no signs of a second wave.

The chief economic advisor KV Subramanian now expects a recovery from July onwards as states have started removing restrictions. "And if we speed up vaccination, our economy will start recovering,'' said CEA.