The pace of contraction in the September quarter is considerably slower than the 23.9 per cent decline registered in the June quarter, bolstering hopes of recovery

India is officially in recession. The economy has contracted for second successive quarter. India's GDP declined 7.5 per cent during the September quarter, showed government data released on Friday. Indian economy had grown at the rate of 4.4 per cent in the year-ago period. 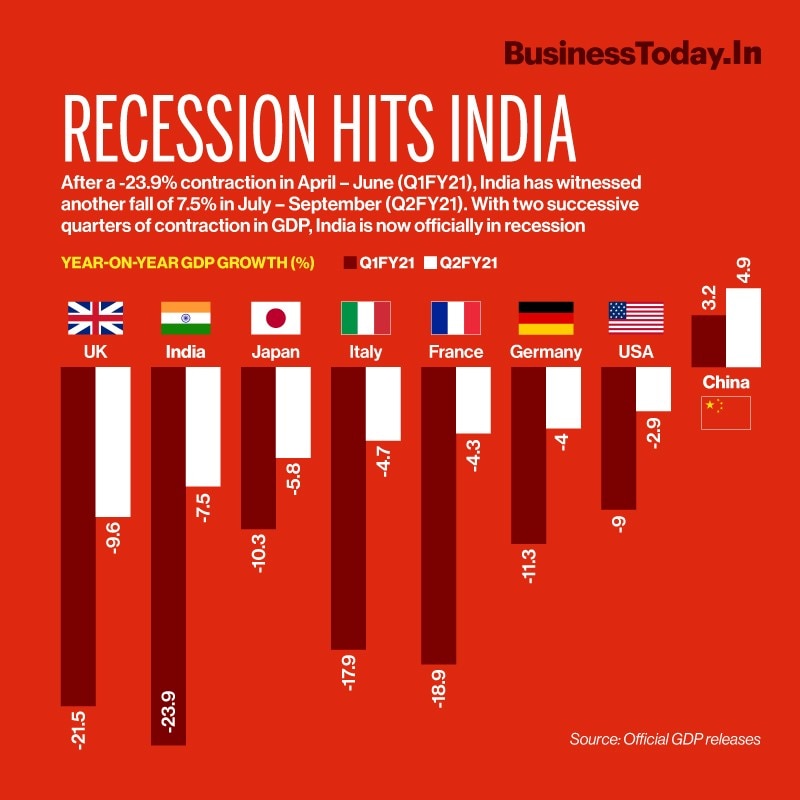 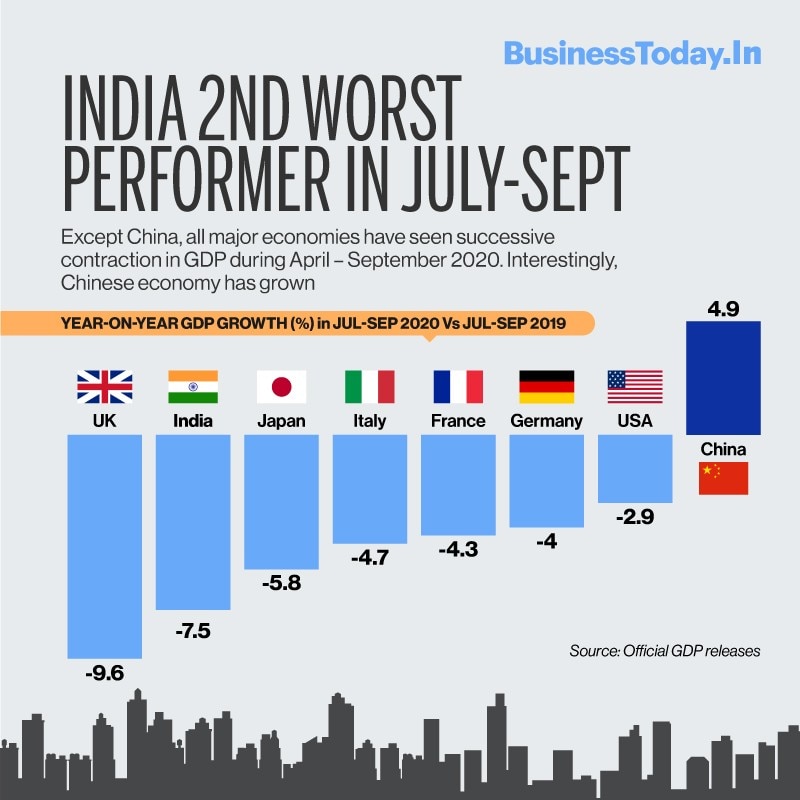 The Reserve Bank of India, in its monthly bulletin for November, had predicted that India will enter a technical recession in the first half of the current fiscal, on account of the economic disruptions due to the coronavirus pandemic. As predicted by the central bank, and several other experts, the pace of contraction in the September quarter is considerably slower than the 23.9 per cent decline registered in the June quarter. This trend bolsters hopes that Indian economy might start on the recovery path in future, as expected.

ALSO READ: Indian economy getting back on track; growth to turn positive in Q3, Q4 of FY21: Ashima Goyal

"Q2 GDP contraction at 7.5 per cent is way ahead of expectations. The 0.6 per cent expansion in manufacturing has come as a pleasant surprise. If this trend sustains Q3 contraction will be very low and Q4 will post positive figures. If so, the annual contraction can be around 6 per cent. Sharp expansions in H1 FY22 is on the cards. A V-shaped recovery in FY22 is in the realm of possibility. It is important to sustain the growth momentum," said V K Vijayakumar, Chief Investment Strategist at Geojit Financial Services.

"Economic data ahead would be crucial to gauge the quantum of 'froth' in this Q2 data from pent up, festive and inventory restocking demands and to also throw more light on the employment and wage situation. How the rate of cost-cutting done in Q2 by companies to improve profits moves, the domestic COVID infection rate in the next few weeks, the situation in our major export markets and the policy support there would all mater. Most important to see would be how flat the recovery leg eventually is and thus the hit to medium-term potential growth," said Sreejith Balasubramanian, Economist - Fund Management, IDFC AMC.

"Manufacturing is at just 0.60 per cent as against an expected contraction of (-)9 per cent. This has helped the aggregate number to be better than expected. While agriculture is positive at 3.4 per cent, construction and mining remains in negative territory. H2 overall is expected to be positive, but mildly positive. So, the economic contraction is gradually slowing down. There is nothing extraordinary about the numbers but there is a clear implied reassurance of a gradual recovery ahead," said Joseph Thomas, Head of Research - Emkay Wealth Management.