The policy focusses on almost doubling the Gross Enrolment Ratio (GER) in higher education, including vocational education, from 26.3 per cent to 50 per cent by 2035

After almost three decades, the government is ready to transform the country's education system by making some impactful suggestions. While the National Education Policy 2020 (NEP 2020) aims at making India a global knowledge superpower by providing high-quality education to all, some of its targets look ambitious going by its past performance, although it doesn't mean that one rules out potential success in future.

The policy focusses on almost doubling the Gross Enrolment Ratio (GER) in higher education, including vocational education, from 26.3 per cent to 50 per cent by 2035. The GER in higher education, calculated for 18-23 years, has improved from 20.8 per cent in 2011/12 to 26.3 per cent in 2018/19 - an increase of 5.5 percentage points over the last eight years. Growing by this rate, it would achieve only three-fourth of the target in the next 15 years. Statewise, the picture was not so disappointing as the ratio varies considerably in different regions. Sikkim with GER of 53.9 tops the list along with Chandigarh (50.6 per cent), while Tamil Nadu in the third spot was in close proximity, at 49 per cent. Tamil Nadu has an average enrolment of 924 students per college while the average enrolment per college was 751 and 2,034 in Sikkim and Chandigarh, respectively. A total of 18 states and union territories have a GER more than the national average including Kerala (37 per cent), Maharashtra (32 per cent) and Punjab (29.5 per cent).

NEP 2020 has set the target to increase the public investment in the education sector to reach 6 per cent of Gross Domestic Product (GDP) at the earliest. Currently, the expenditure on education by centre and states as a proportion of GDP is 3.1 per cent in 2019/20 (budget estimates) and has inched up by a meagre 30 basis points in the past six years. A closer look reveals that it remained stagnant at 2.8 per cent of GDP between 2015 and 2017 and crawled to 3.1 per cent in 2018/19 and stayed there. 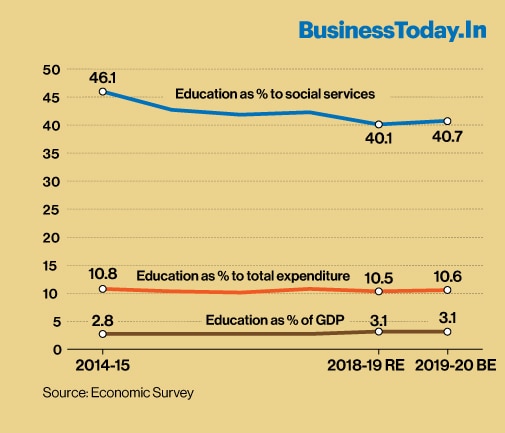 The government does not seem to be increasing investments in this sector as the new policy requires since its share in the total social services spends (both Centre and states) has significantly fell down from 46.1 per cent to 40.7 per cent during the last six years, but it still remains the maximum. Also, 2019/20 saw an 18 per cent increase in the budget allocations towards education compared to just 4.6 per cent growth in the budget estimates of 2020/21.

Also Read: Tata Steel and its same old plans to turn around Corus