GST was supposed to be a simple, self-regulating and non-intrusive tax compliance regime to replace a complicated and multiple indirect tax systems. What has been rolled out remains very much a work-in-progress after more than two-and-half years

Textbooks of economics would tell you that direct tax is progressive because it is based on the cardinal principle of ability-to-pay (equity). Those making profit (corporate tax) and income (individual tax) are asked to pay proportionately - higher the profit or income, higher the tax incidence. On the other hand, indirect tax is considered regressive because it makes no such distinctions. Rich or poor, everyone is treated equally and made to pay equal tax for goods and services they consume.

Tax regime: Regressive one with heavy dependence on indirect tax

India's tax system is regressive with heavy dependence on indirect tax. This would be clear by mapping the gross tax revenue (of both centre and states)-as reproduced below. Indirect-tax-to-GDP ratio remains consistently higher than that of direct tax-to-GDP (2011-12 series, current prices). In developed economies, it is the other way round.

In the OECD countries, for example, the average share of direct tax is about two-third of the total tax, while it is a little over one-third in India.

At 18.9% in FY20 (BE) India's tax-to-GDP ratio is also far lower. The average for 36 OECD countries has remained at about 34% or above since 2000 for which data is readily available. A 2017 study of the National Institute of Public Finance and Policy (NIPFP) - a finance ministry think tank -showed that India's tax-to-GDP ratio was lower than even the average of its peer group (lower middle-income countries) by more than 1 percentage point.

There is another aspect of it which is revealed when the net tax data is examined. The difference in gross and net taxes is on account of various incentives, deductions and refunds etc. for both direct and indirect taxes.

Using the data on net taxes released by the Income Tax Department (ITD), the tax-to-GDP ratio presents a different picture. The uniformity of movement has disappeared and direct and indirect taxes swap positions at least twice - once in FY08 and then in FY17.

A similar picture emerges when the growth rates are considered - both for gross and net tax.

The growth rates are far more volatile and unpredictable - in both gross and net tax. The RBI provides the gross tax data up to FY20 (BE). 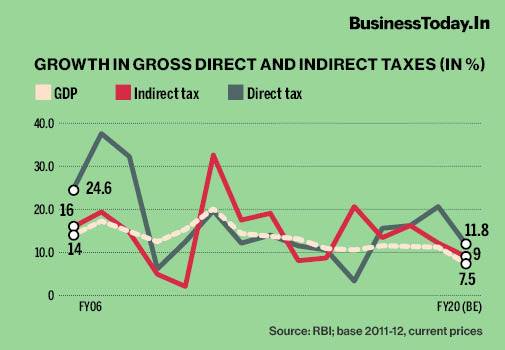 Three noticeable features emerge from the two graphs: (a) direct and indirect taxes swap positions frequently (b) gap from the GDP (nominal) growth is far higher for direct tax until FY09 than in the later phase and (c) growth in indirect tax is far much more unpredictable.

The overall trend is downward, especially after FY11 - which would mean that a slowdown in the production and consumption of goods and services set in nearly a decade ago. It would also indicate various tax incentives given in the post 2007-08 global financial crisis.

Be that as it may, these graphs present a discomforting picture. It shows India's tax regime can be unpredictable. Such a situation is not conducive for long-term planning for investment.

GST: Revolutionary but complex and prone to evasion

The Goods and Services Tax (GST) was billed as a major indirect tax reform to reduce cascading indirect tax effect and build a common market for goods and services in the country. It was expected to be simple, self-regulating and non-intrusive tax compliance regime. But it was rolled out (in July 2017) without adequate preparation or attention to design and the impact of these are visible even after more than two-and-half years later.

It is, however, a work-in-progress and some high-value commodities like petroleum products, electricity and alcoholic liquor for human consumption are out of its ambit. Basic food items, exports and some supplies are zero-taxed; health, education and legal services attract partial exemptions.

Just how the GST has changed India's indirect tax landscape would be evident from the following graph. It found India's GST relatively more complex with its high tax rates and multiple tax rates than comparable systems in 115 such countries. At the highest rate of 28%, India's is the second-highest among 115 countries - and is viewed as regressive by tax experts.

Commenting on these, the paper said high and multiple rates make the system complex, add to the cost of compliance and incentivise tax evasion. The relevant observation is reproduced below.

It also pointed at many other shortcomings and called for "appropriately structured and resourced administration, compliance strategies based on a balanced mix of education and assistance programs and risk-based audit programs".

None of these seem to have been addressed as would be clear from the performance audit of the GST system by the Comptroller and Auditor General of India (CAG) and subsequent developments.

More than two years after the GST was rolled out, the CAG carried out an audit - report no. 11 of 2019 - and found many shortcomings: complex filing mechanism, glitches in IT infrastructure, inadequate safeguards, leakages, frauds and many implementation issues, leading to a slowdown in GST collections.

It found the system of verifying input tax credit by 'invoice matching' non-existent and refunds being made on self-declarations. 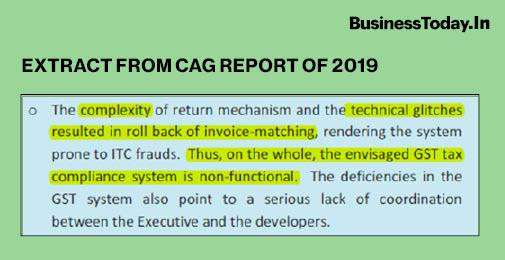 That is because although the monthly filing of returns (GSTR-1) which provides details of outward supplies is mandatory, there weren't many takers of it. Further, introduction of summary self-assessed returns (GSTR-3B) filed annually led to filing of returns with input tax credit (ITC) claims which could not be verified and that dis-incentivised filing GSTR-1 even more.

The GSTR-3B is a summary return while it is the GSTR-1 which provides invoice details for matching or verification. 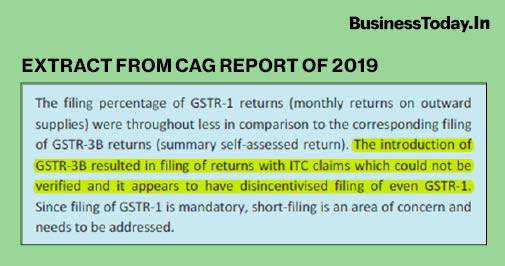 The taxpayers could avoid filing GSTR-1 because there was a provision for late filing and penalty on late filing was waived off until January 17, 2020. Not filing GSTR-3B attracts penalty and hence it has better compliance. The trouble is the absence of invoice-matching led to unverified and fraudulent claims.

Further, the ITD has also been repeatedly deferring the requirement for companies to provide details of GST in their tax audits. The next tentative date is April 1, 2020.

The net result is what M Govinda Rao, former director of the NIPFP and a tax expert, says: GST is a "voluntary tax" because the probability of detecting evasion is "zero".

No wonder, the CAG found and drew attention to reports of fraudulent claims through fake invoices and blamed it on the partial rollout of GST system - the relevant part is reproduced below.

Reports of such fraudulent activities keep pouring in. One is from February 3, 2020 which said one person was arrested by the tax authorities in Delhi for allegedly using fake invoices worth over Rs 1,200 crore. He allegedly used 49 shell companies for this.

What makes matter worse is that the GST data is out-of-bounds even for the CAG - making any assessment impossible. The CAG detailed how in spite of the fact that providing such data to it is a constitutional and legal requirement, it was given only the aggregate statistics at the Commissionerate level (for central data) and state level (for state data).

Meyyappan Nagappan, GST expert with the law firm Nishith Desai Associates, succinctly sums up the shortcomings with the current GST structure and what needs to be done:

"GST was meant to be a simple, low tax, wide net measure that was easy to administer and comply with. The high rates on some supplies, including the possibility of arbitrage due to multiple GST rates, encourage non-compliance and litigation. Significant growth in indirect tax revenues, on a year-on-year basis, is undesirable as it is regressive and will have a disproportionate impact in a slowing economy apart from being inequitable.

"Resultantly, instead of encouraging voluntary compliance, tax authorities may have to rely on enforcement which is costly for both the department and the businesses. Wider powers for enforcement being granted to tax authorities or increasing penalties is also not desirable as it is prone to misuse. More efforts should be made to reduce and streamline the GST rates and structure. The government should look to other avenues to raise revenue growth and have realistic targets when it comes to the GST collections."