The region has remained cut off from the outside world for months after India revoked its autonomy but the curbs were lifted gradually. While it is too early to assess the impact of this constitutional change, it seems imperative given the challenges faced by the region

This day last year, Jammu & Kashmir lost its special status after the abrogation of Article 370 and 35-A. The region has remained cut off from the outside world for months after India revoked its autonomy but the curbs were lifted gradually. While it is too early to assess the impact of this constitutional change, it seems imperative given the challenges faced by the region. However, the immediate outcomes could be varied due to the uncertainties amid the rapid spread of coronavirus and extended lockdown across regions.

The unemployment rate in Jammu & Kashmir has been above the national average for at least past four years, going by the monthly jobs statistics of the Centre for Monitoring Indian Economy's (CMIE). Last year in July, it was among the top four states with high jobless rate, at 16.3 per cent. In the following month, when the Article 370 and 35-A were repealed and a curfew was imposed, the unemployment rate rose to 22.4 per cent. It intermittently fell to 15.5 per cent by March 2020 and surprisingly dropped to 5.2 per cent in May, almost 18 percentage points lower than the national average when the labour market was grappling with pandemic-led nationwide lockdown. It was short-lived though as the rate moved to 17.9 per cent a month later only to settle at 11.2 per cent in July. There was almost a complete communications blackout imposed in the erstwhile state for months which restricted the use of phone and internet. However, the blockade was gradually lifted from October and since then the region witnessed a monthly growth in wireless subscribers which had declined sharply by 13 per cent in November. Besides, it posted the maximum increase in the months of December (5 per cent), January (11.7 per cent) and February (2.1 per cent), across the country. Nonetheless, the progress in March and April was significantly impacted due to the countrywide lockdown. J&K traditionally had a low share in the country's new investments. It had a minuscule share of 0.5 per cent in the June quarter of FY20 which dropped to 0.2 per cent and 0.01 per cent in the next two quarters. During the last quarter, demand had crashed when most of India was under a lockdown and fresh investments touched its lowest in 16 years. However, three new investment proposals worth Rs 3,142 crore were announced in the region compared to new investments of just Rs 25 crore in the March quarter. 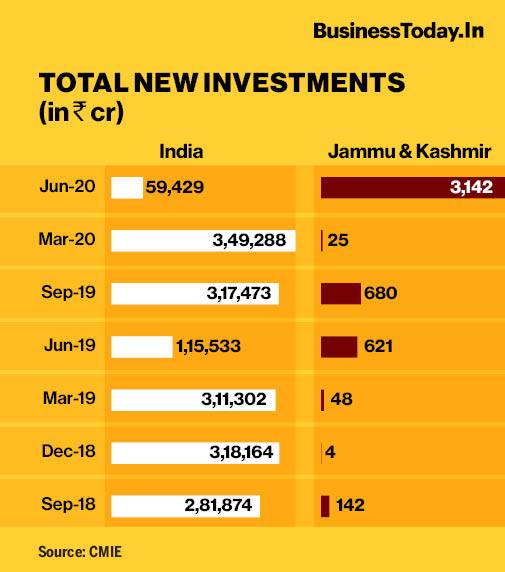 These high-frequency indicators may not portray a conclusive picture of India-administered Kashmir but do give a glimpse of the situation unfolding in the valley.