Despite the robust festive season demand, economists expect industrial activity to remain muted during the coming months on account of persisting supply side constraints in the auto sector and high base of last year.

IIP growth fell to 3.1 per cent in September, compared to 12 per cent in August on a YoY basis. Photo: Reuters

Growth in industrial activity fell to a seven-month low in September, thereby snapping the four months of double-digit expansion and highlighting the impact of semiconductor shortage, coal mining disruption, and unfavorable base effect. Despite the robust festive season demand, economists expect industrial activity to remain muted during the coming months on account of persisting supply side constraints in the auto sector and high base of last year.

Index of industrial production growth fell to 3.1 per cent in September, compared to 12 per cent in August on a year-on-year (YoY) basis, data released by the National Statistical Office showed on Friday. It is the lowest reported growth in the current fiscal so far. 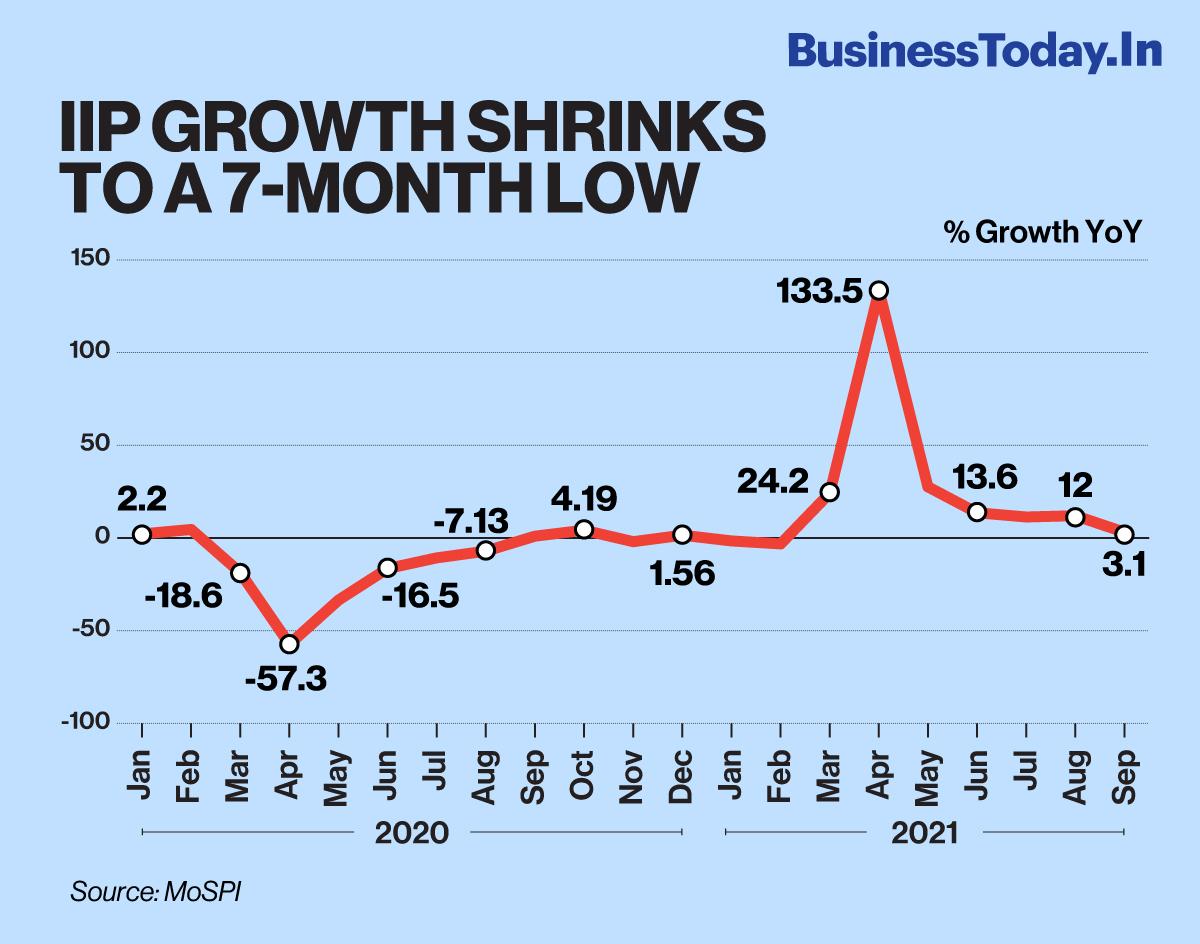 "While the high frequency indicators such as the record high GST e-way bill generation are encouraging, the festive season trends were somewhat divergent across price points, and the supply side issues afflicting the auto sector continued to act as a dampener. On balance, we expect the high base to keep the IIP growth lacklustre at under 2.5 per cent in the just-concluded month," Nayar added.

Mining activity growth fell sharply to 8.6 per cent, from 23.5 per cent reported in August, due to excess rainfall, causing coal shortage and subsequently disruption in power generation. Electricity production growth as per the index declined to 0.9 per cent in September from 16 per cent in the previous month.

Manufacturing sector, which makes up for 77 per cent of the index saw growth fall to 2.7 per cent in September from 10 per cent in August.

.In October, nearly two-thirds of India's coal-fired power plants had stockpiles of a week or less. October reported the highest power supply shortfall in five years of 1,201 million units due to coal shortage with thermal plants.

"Despite registering YoY growth in September 2021, the output level of both the segments  (manufacturing and mining) are still lower than the pre-COVID-19 period (February 2020)," said Sunil Kumar Sinha, Principal Economist, India Ratings and Research. "No doubt festival demand is finding reflection in the year-on-year growth but the consumption demand after the COVID 1.0 and 2.0 still has not reached to the level that industrial output could reach or surpass the pre-COVID-19 period. India Ratings and Research (Ind-Ra) believes revival of industrial output will remain a challenge in the near term," said Sinha.

10 out of 23 sub-sectors posted a negative growth, with the sharpest decline seen in the manufacture of motor vehicles and manufacture of 'other transportation equipment' segment at (-) 9 per cent and (-) 18.5 per cent, respectively.

Auto sales were down 19.7 per cent in September to 1,717,728 units as against 2,140,549 units, according to industry body SIAM. Passenger vehicles, per se, moved to negative with a 41.1 per cent decline in domestic sales on the back of shortage of semiconductor chips, causing a major concern for the industry.

Consumer durables, which comprises white goods, posted a 2 per cent decline in manufacturing activity compared to an 8.2 per cent growth in the previous month.

"Notwithstanding the unfavourable base, the de-growth in consumer non-durables in September 2021 suggests that the demand revival remains tentative, said Nayar of ICRA.

Consumer non-durables, which represents inelastic demand, reported a 0.5 per cent decline in production activity compared to a 5.6 per cent growth in August.

"In addition to the unfavourable base, the sharp slide in the growth of capital goods and re-emergence of the contraction in the output of consumer durables can partly be attributed to the auto sector's woes," said Nayar.

Madan Sabnavis, chief economist, CARE Ratings, said that base effects will continue to dominate the growth numbers going ahead and "October performance will be interesting as there was high growth of 4.5 per cent last year which will give a disadvantage. Therefore, the large-scale consumerism seen in October will have to counter this stronger base effect," said Sabnavis.

The IIP growth is just 3.7 per cent higher in September compared to the pre-COVID-19 level of September 2019.

Also read: Retail inflation rises to 4.48% in October on increase in vegetable prices