The top five car makers - Maruti, Hyundai, Tata, Mahindra and Mahindra, and Kia - have dispatched 2,89,176 units to the dealers.

Indian passenger car makers have recorded a 29.26 per cent increase in sales in October 2022, revealed Federation of Automobile Dealers Associations (FADA) Chairman Vinkesh Gulati in a tweet. This increase in sales could be attributed to the festive season in the country. 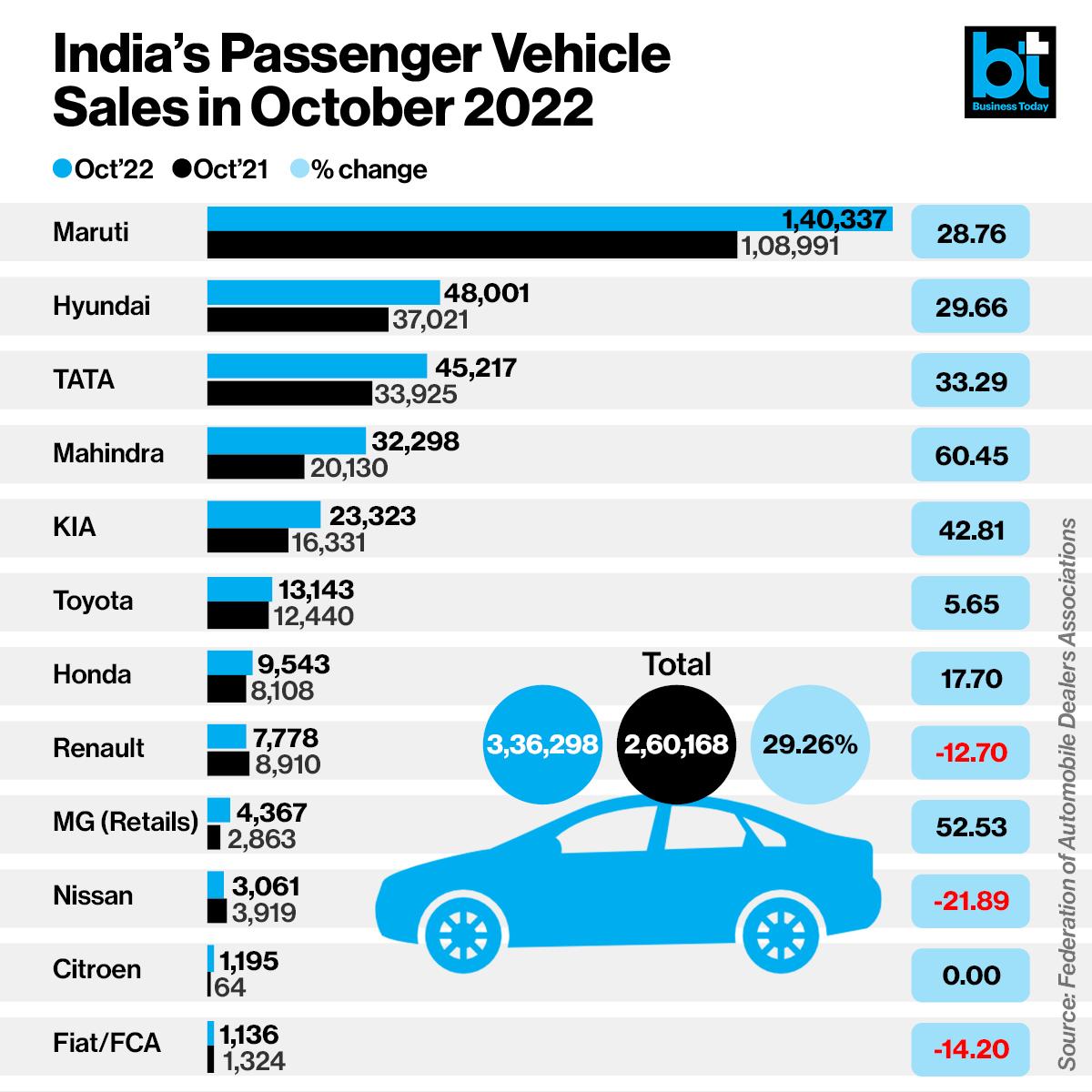 Maruti Suzuki reported a YoY growth of 29 per cent in its domestic dispatches in October 2022. However, on a MoM basis, the sales have dropped 5 per cent. The company dispatched 1,40,337 units in October this year, down from 1,08,991 units in the same month last year.

India’s second-largest carmaker Hyundai dispatched 48,001 vehicles during October 2022, up 29.66 per cent as against 37,021 units in October 2021. However, the company also claims it is set to register record domestic sales volume in CY 2022.

Korean carmaker’s midsize SUV Creta and compact SUV Venue were the top sellers in their respective segments. Interestingly, Hyundai’s cumulative sales for the first seven months of FY23 stood at 3,33,006 units, up 19.13 per cent over the same period last year.

Moreover, the company’s electric vehicle (EV) sales, including domestic and exports, for October 2022 stood at 4,277 units, up from 1,660 units in October 2021. It should also be noted that the company hasn’t revealed its domestic EV sales figures for the month.

Homegrown SUV manufacturer Mahindra & Mahindra saw a 60.45 per cent growth at 32,298 units over last October in terms of sales. In September 2022, the company sold 32,298 units, 12,168 units less than the last month. This is also the carmaker’s second-best monthly sales this fiscal.

Mahindra’s current passenger vehicle offerings in the country are - XUV700, Scorpio N, Scorpio Classic, XUV300, Bolero and Bolero Neo. The company, in FY23, had managed to sell 1,99,278 UVs so far, registering a 78 per cent growth against the same period in the last fiscal.