FDI in retail: Winter session headed for wash out, Cong firm on stand

With Parliament going into a four-day recess, the two Houses will now meet on December 7. The current session is slated to conclude on December 22.

BT Online Bureau
Almost half of Parliament's Winter session was washed out on Friday, with the logjam over foreign direct investment (FDI) in retail continuing for ninth-consecutive day.

'Down, Down, FDI', 'FDI Wapas Lo' rent the air in both Lok Sabha and Rajya Sabha with Trinamool Congress and DMK members joining the Opposition - BJP, Left, JD-U and Samajwadi Party - in the protests against the move.

Some slogan-shouting Trinamool members, along with those from the Left, JD(U) and SP, even stormed the Well in the Lok Sabha.

With Parliament going into a four-day recess, the two Houses will now meet on December 7. The current session is slated to conclude on December 22.

US welcomes govt's move for FDI in retail

It was the repeat of the previous days in both Houses as uproar started soon after they met for the day. Both Houses were first adjourned till noon and then for the day.

Can the govt save Parliament's winter session?

In the Rajya Sabha, unruly scenes were witnessed just as the House met for the day with Opposition demanding rollback of the FDI decision.

When the House re-assembled, similar scenes were witnessed with the entire Opposition raising slogans.

In the din, Deputy Chairman K Rahman Khan directed laying of papers. As the din continued, he adjourned the House for the day.

CONG DARES OPPOSITION TO BRING NO-TRUST
A report in MAIL TODAY says: "An exasperated Congress has dared the Opposition to move a no-confidence motion against the government. The Congress maintained that it had the requisite numbers in the House.

"If there is any division in the House, our allies will be with us, voting," Congress spokesperson Rashid Alvi said. "If the Opposition has the numbers, let it bring a noconfidence motion against the government in the Lok Sabha," he added.

Retailers back govt on FDI move

A source said if it comes to a vote, the allies are likely to support, or at least bail out, the government in Parliament, but are unlikely to implement it in their states. 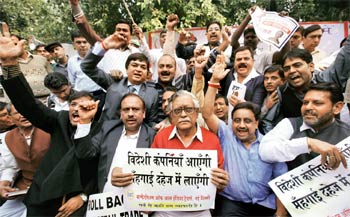 CPM leaders, led by MP Gurudas Dasgupta, protest against the governments decision to allow FDI in retail.
On Thursday, the leader of the Opposition in the Lok Sabha, Sushma Swaraj, dragged Sonia Gandhi into the controversy. The senior BJP leader questioned the silence of the Congress president and general secretary Rahul Gadhi on the issue.

"The UPA government has been forcefully supporting the move. But no senior Congress member, including party president Sonia or general secretary Rahul, has said anything on the subject," Swaraj said.

She claimed there were differences between the Congress party and the government on allowing FDI in multi-brand retail and dared Sonia and Rahul to make their views public on the matter.

Congress sources, however, trashed the charge, saying both Sonia and Rahul have been kept in the loop. Commerce minister Anand Sharma has briefed them several times and they are convinced that FDI in retail was the right step to script our growth story, a source said.

An AICC leader, however, said: "The FDI in retail was a right decision, but at a wrong time." Soon after Parliament was adjourned on Thursday, Prime Minister Manmohan Singh assumed the role of a crisis manager and reached out to the allies. A meeting was called after the DMK and the Trinamool Congress joined the Opposition in demanding a rollback.

A source said the PM made it clear the government was determined to go ahead with the decision to introduce FDI in retail.

It was learnt that though the Trinamool and the DMK were firm on opposing the FDI, they communicated to the PM that if it came to the numbers in case of voting on adjournment motion, they would bail out the government in Parliament.

A Congress source said the Trinamool could abstain from voting, but the DMK is still keeping its cards close to its chest.

Bansal was confident the government has the majority if it comes to voting. "I am very confident. We are sure about that. When the occasion comes, you will see that," he said.

- With inputs from agencies