The Zomato delivery boy, Kamaraj claimed that he even apologised to the woman since the delivery was delayed due to traffic and bad roads but she was very rude to him 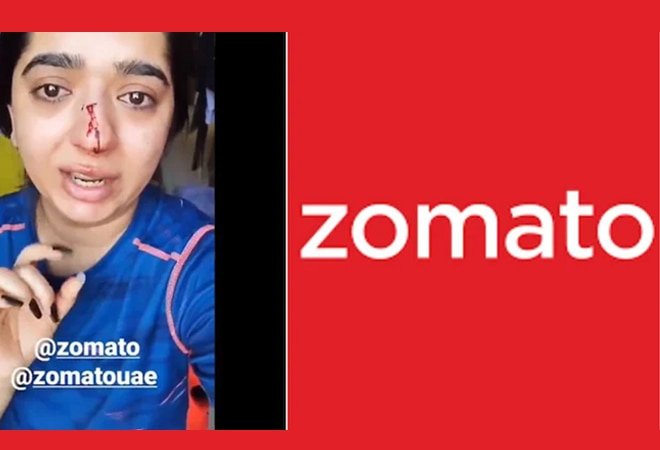 The woman, Hitesha Chandranee, has alleged that the Zomato delivery executive, identified as Kamaraj, "barged" into her home and "attacked her"

The Zomato delivery boy accused of assaulting a Bengaluru woman has refuted all her allegations, claiming it was the woman who first verbally abused him, and then threw a slipper at him.

The woman, Hitesha Chandranee, has alleged that the Zomato delivery boy, identified as Kamaraj, "barged" into her home and "attacked her".

Denying all her claims, the delivery boy broke his silence on the matter and chronicled his side of the story.

"That day I reached the customer's apartment and before I gave her food order, I told her that I am late and to please accept the order. I then gave her the food order. She placed it on a table near the door. Since it was a COD delivery, I asked her for the amount to be paid. She told me to wait since she was chatting with customer care."

Kamaraj stated he even apologised to the woman since the delivery was delayed due to traffic and bad roads but she was very rude to him.

He said that Chandranee refused to pay after taking the order and that she was also talking with Zomato chat support simultaneously.

"I requested her not to complain since it will be trouble for me. She then very rudely in English told me to wait. I asked not to speak in that language since I am a delivery boy and not a slave," Kamaraj stated.

"She then got angry and said 'so what if you are a slave, what will you do, wait there.' Then she said she will now not give the food back, will not pay either and the food order is free. I said it is a COD order and I have handed the food item to you so please pay up. There was traffic, roads are dug up and blocked so please pay the amount," he added.

Kamaraj said that the woman then refused to pay the cash, after which he picked the food item placed near the door. Seeing this, Chandranee pushed and cursed him in Hindi saying "you came late and are not taking the food back.

"She picked a slipper and hit me and also threw a slipper at me. I kept saying this is wrong, please do not do this," the delivery boy stated adding that "when she was hitting me, I defended myself by pushing her hands away. She had a ring on her finger and this hit her nose. You can see the ring in the video she has posted on social media."

Kamaraj further explained that he decided not to stay there after seeing her injury. "I tried to take the lift but she did not allow me to do so. Since her flat was on the fourth floor, I decided to take the steps and ran down.  A person came out and asked what the commotion was all about, why are you running. I told them what happened and the lady beat me because I was late. The person then told me why you are delivering food to such people," he said.

"By that time, the customer care called and told me to leave this place. They cancelled the order and I took the food order back. This is what happened," Kamaraj said.

While the incident occurred on Tuesday, March 9, the matter came to light on Wednesday, March 10, after Chandranee shared her experience in a video she posted on social media.

Replying to her tweet, Zomato said, "Hey Hitesha, thank you for speaking to us, we can assure you this is not the experience our delivery universe stands for. Our local representative shall be in touch with you shortly to help you with the police investigation along with assistance on the medical care required. We can't emphasise how sorry we are, rest assured we'll take necessary actions to prevent such incidents from happening in the future."