Bihar floods: Patna was the worst affected with parts of the capital namely Dak Bungalow Chauraha, NMCH and others were submerged in deep waters and its residents were rescued by the authorities with the help of municipal cranes. 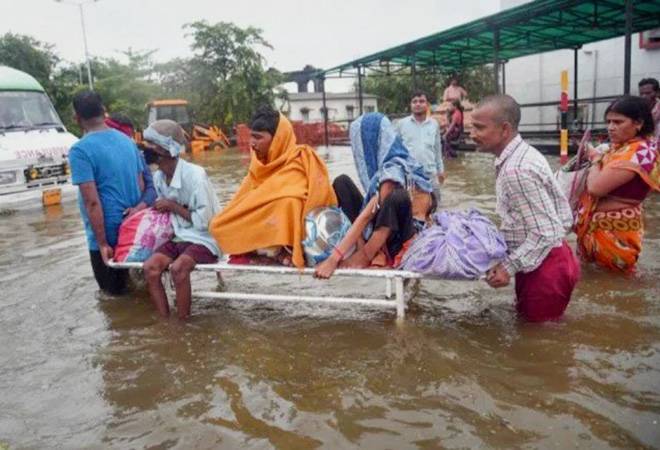 Torrential rains continue to batter several parts of eastern India including Uttar Pradesh and Bihar. Over 110 have lost their lives in rain-related incidents in the two states. In Bihar, heavy rains have claimed 29 lives, according to Bihar State Disaster Management Authority. Patna was the worst affected with parts of the capital namely Dak Bungalow Chauraha, NMCH and others were submerged in deep waters and its residents were rescued by the authorities with the help of municipal cranes.

As per the Uttar Pradesh relief commissioner's office, around 14 people died due to heavy rains on Sunday. Meanwhile, the weatherman has cautioned of more rainfall in the next 24 hours in Bihar. The authorities have shut down schools till Tuesday in anticipation of more showers.

Bihar had lost at least 18 lives on Sunday owing to mishaps caused by the downpour that inundated streets, water-logged railway tracks and marooned business establishments.

"It is nature's fury before which man is often helpless. We are, however, trying our best. The problem is, we have no idea how long the downpour which caps a prolonged dry spell causing a drought-like situation is going to last. Even the weather department seems clueless, making different predictions at different points of time," Chief Minister Nitish Kumar told reporters on Sunday.

He was speaking after holding a meeting with top officials, including those of the disaster management department, where he also interacted with officials in the other districts through video conferencing.

He later on drove through the water-logged streets of the city, worst-affected localities like Rajendra Nagar, issuing instructions to officials, who accompanied him during the round.

The cranes of Patna Nagar Nigam turned saviours as these were used to pick up people stranded in places rendered inaccessible through normal modes of transport many of them being girls and boys from far-off districts, who come here for studies and put up at hostels.

Business has been hit badly as even drug stores were forced to keep the shutters down for fear of the stocks getting damaged and even swept away by gush of water.

"I must have suffered losses worth lakhs. I am clueless as to how to keep secure the goods which have not yet been destroyed," Jagdev Prasad Gupta a general store owner from Rajendra Nagar said, standing in waist-deep water told PTI.

The incessant rainfall also led to wall/roof collapse incidents in three different localities of Bhagalpur district claiming a total of eight lives, including a woman. Three casualties each were reported from Barari and Khanjarpur and two from Nathnagar localities.

In Danapur, on the outskirts of Patna, a tree fell on an auto-rickshaw crushing to death four of its occupants including a one and a half year-old girl.

Three more deaths were reported from Bhabhua, the district headquarters of Kaimur, on account of the collapse of two mud houses in separate localities.

In Khagaria, three persons were drowned. A 32-year-old man was swept away by strong current in the river Ganges which locals attributed to the torrential rainfall. Besides two girls, cousins and aged five and eight years, drowned as they slipped into a deep pit while frolicking around in waterlogged streets.

In addition, five persons were swept away by strong currents in a river in Nawada. However, two of them a married couple swam to safety.

The remaining three were yet to be traced, though the district administration said it was "not counting them as dead" in view of the possibility that they may be rescued by teams of NDRF and SDRF.

The East Central Railway, headquartered in Hajipur and covering most parts of the state, said many trains have been cancelled, short-terminated or diverted on account of heavy water-logging over railway tracks and, in some places, damage caused to bridges.

ECR Chief Public Relations Officer also said "All trains passing through Patna Junction have been mandated to stop at Danapur as well. The move has been taken to bring some relief to the people who are greatly inconvenienced by the water-logging inside and around the Patna Junction."

"The arrangement shall continue till Monday when further decisions will be taken after a fresh review of the situation," he added.

Air traffic has also been affected as GoAir announced on Twitter that it has diverted its flights from Mumbai to Lucknow and those from Delhi to Varanasi.

The air carrier, along with IndiGo, issued advisories to passengers from the city to leave for the airport well in advance, apprehending traffic snarls.

SpiceJet also urged passengers to "keep a check on flight status" since the movement of flights could get affected "due to bad weather in Patna".