Delhi containment zones: The Southwest district of Delhi has reported a rise of 37 zones since the re-mapping exercise started, taking the total number of such areas to 80 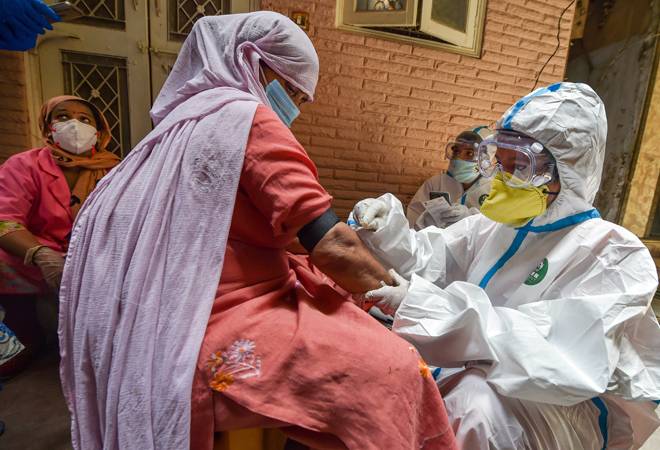 A medic takes blood samples for serological survey to analyse the spread of COVID-19, at Paharganj in New Delhi. (Photo: PTI)

The Southwest district of Delhi has reported a rise of 37 zones since the re-mapping exercise started, taking the total number of such areas to 80. The North Delhi district has 59 containment zones, followed by South district (56), Central district (40), Shahdara district (38), East district (33) Southeast (32), Northwest (28), West (25), New Delhi (21) and Northeast (9).

Delhi health officials are expecting an increase in the number of containment zones as authorities are yet to complete the task.

With the rising number of coronavirus cases in Delhi, the state government is ramping up its strategy to combat the virus. As per the Delhi government's revised strategy, every house will now be screened by July 6. Every house in the containment zones will be screened by June 30. All symptomatic and asymptomatic cases will be tested in containment zones between 5th and 10th day.

The city has started conducting a serological survey from June 27. At least 20,000 samples will be collected as a part of a sero survey.

A strict monitoring plan will also be implemented at the district level. The state government has mandated everyone to download the Aarogya Setu app, especially in the worst-affected neighborhoods.