Diamond Princess cruise carrying 3,711 people on board has been kept in quarantine off coast of Yokohama, Japan; among them, 132 crew members and six passengers are Indian nationals 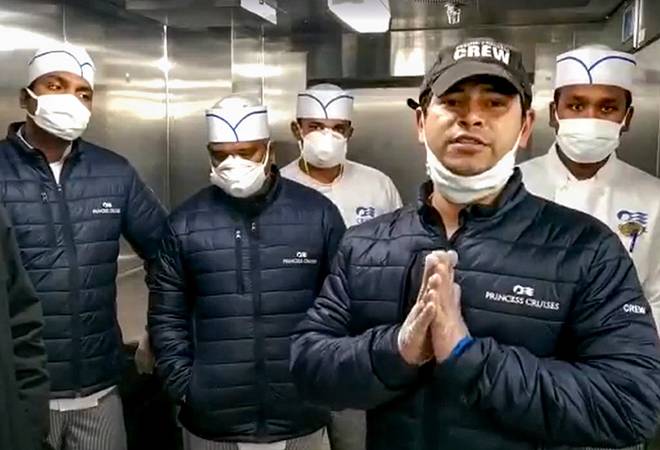 At least three Indians on board cruise ship Diamond Princess off Japanese coast have sent SOS, appealing for help from the Indian government and Prime Minister Narendra Modi. The British Diamond Princess cruise ship carrying 3,711 people on board has been kept in quarantine off the coast of Yokohama, Japan. Of all people on board the ship, 266 are guests and 1,045 are crew members. Among them, 132 crew members and six passengers are Indian nationals.

One of such crew members, Anbalagan, who hails from Madurai, Tamil Nadu, has shared several videos, explaining the conditions on the ship. As per Anbalagan, all passengers are in the ship's top decks where they are being sent food to rooms only. Apart from restrictions on the passengers' movement, all of them have been asked to maintain at least six feet distance from each other. Anbalagan said they were allowed to walk only for few minutes a day.

Anbalagan and another Indian national named Binay Kumar, a chef from north West Bengal, in one of the videos, can be heard saying they didn't even know if they'll be alive. "There are protocols that need to be followed. There is fear that we might lose jobs or won't get other jobs because of breaking the protocol. But what is the point of following the protocol when we don't know if we will live." Highlighting the grave situation inside the ship, Anbalagan said they were initially told no crew members were infected but now over 10 crew members were tested positive for novel coronavirus (nCoV). "We share plates, and eat in the crew mess. Easily, we can also be infected if we are not brought out of this place," he added.

Binay Kumar Sarkar, in his video made a day after he was quarantined, appealed to PM Modi to rescue Indian nationals from the ship. "Modi ji has been my idol, and just like how the [IAF] commander [Abhinandan Varthaman] was helped out of Pakistan, we hope you will rescue us as well," Sarkar said in the video. Another Indian national, Sonali Thakkar, who's a security officer at the ship, also sent a request for appeal from the government.

As per Sonali, who was placed in isolation on Monday, the infection is spreading fast, which could affect others on the ship. She said the Indian government should take the Indian nationals back home and isolate there. "We are scared that if the infection is spreading, it is spreading so fast that we could also become one of them. We don't want to. We just want to go back home...we want to go home," NDTV quoted Sonali as saying.

The Indian nationals on board the British ship have appealed for help from the government and United Nations on earlier occasions too. As per latest information from the Indian Embassy in Japan, two Indian crew members on board the cruise ship were tested positive for the novel coronavirus. Authorities have confirmed that as many as 174 people on board have been infected with the deadly disease. "Due to the suspicion of novel coronavirus infection, the ship has been quarantined by the Japanese authorities till February 19, 2020," the embassy said in a statement.

All the infected people had been taken to hospitals for adequate treatment, including further quarantine, in accordance with the Japanese health protocol, it said.

The Indian Embassy was in constant touch with the Japanese authorities to ensure the welfare of Indian nationals on board the ship as well as the possibility of their early disembarkation, in case they were not found to have tested positive for the virus.

Japanese authorities have confirmed that they were following the designated health protocols, it said. "None of the Indian nationals have complained of discriminatory treatment meted out to them," it said, adding that the mission has been in constant touch with the ship management company- Princess Cruises (for the crew members) and the employer of six passengers to tie up their travel back to India.

Giving details, it said those who had not tested positive, irrespective of their nationality, were allowed to disembark except the critically ill passengers and crew members who have been allowed to be taken to hospitals for further treatment and quarantine.

The death toll in China's novel coronavirus outbreak has risen up to 1,113 with 97 new fatalities reported mostly in the worst-affected Hubei province while the confirmed cases of infection jumped to 44,653, health officials said. The coronavirus outbreak originated in central China's Hubei province in December last year. The virus was officially named "COVID-19" by the World Health Organisation (WHO). Several countries have banned arrivals from China while major airlines have suspended flights to the country.

Bookie Sanjeev Chawla to be extradited to India soon

Indian firms issue record $5.6 billion worth of dollar bonds between January 1 and February 11