Cyclone Vayu may not hit Saurashtra coast. As per weather models , Vayu may skirt the Gujarat coast near Porbandar, close to Dwarka or Okha coast, reported Skymet Weather A huge wave hits the wall of a temple along the sea shore during high tide, at Veraval, in Gir Somnath. (Photo: PTI)

Cyclone Vayu updates: Cyclone Vayu has changed its course and is unlikely to make landfall in Gujarat, but it will cause heavy rain in several coastal districts of the state, said the IMD departmment today. Vayu is said to be the deadliest storm to hit Gujarat since 1998 when a cyclone devastated the port town of Kandla, leaving over 1,000 people dead. The cyclone "is likely to move along and parallel to Saurashtra and Kutch coast", the Indian Meteorological Department said. The Gujarat government on Wednesday evacuated about 3 lakh people while Diu evacuated over 10,000 people from low-lying areas to safer places. Besides, as many as 194 departing flights and 192 arrivals were delayed in the wake of the bad weather. Prime Minister Narendra Modi has advised people in his home state to follow real-time information being given by local agencies to stay safe.

Check all the latest updates on super storm Cyclone Vayu on our live blog.

Gujarat: NDRF rescued a pregnant woman requiring pre-term delivery from Shiyalbet village, where boats are the only mode of transportation & brought her to a hospital in Jafarabad. The woman successfully delivered a baby boy, condition of both the child and mother is stable. pic.twitter.com/ZRY9dVad81

3:40PM: All India Fishermen Association president has appreciated Gujarat government for issuing a timely warning to fishermen against venturing into the sea.

"Around 8,000 fishermen from Saurashtra region were earlier planning to venture into the sea in about 1,200 boats, but they decided against it after the warning," he said.

3:30PM: Power supply has been disrupted in nearly 560 villages of Gujarat due to cyclone Vayu

2:15PM: Defence Minister Rajnath Singh is monitoring the situation of Cyclone Vayu. Rajnath Singh has reviewed the preparations of the Indian Coast Guard and Navy for tackling the cyclone.

11:45AM: No casualties have been recorded due to Cyclone Vayu till now.

Pankaj Kumar, Additional Chief Secretary of Revenue: No casualties have been recorded due to #CycloneVayu till now. The deaths (6 deaths in last 2 days) is not due the cyclone, rather it is due to monsoon. #Gujaratpic.twitter.com/ssUu3X5HGY 11:30AM: The Veraval-Amreli, Amreli-Junagadh, Delvada-Veraval are some of the trains that were cancelled for June 12 and June 13.

11:25AM: The railways has cancelled 77 trains and short terminated 33 others due to Cyclone Vayu, said the Western Railways.

11:20am: Weather alert for Karnataka

11:15AM: Rainfall at few places with heavy falls at isolated places over Gujarat is predicted, reported NDMA India.

According to Skymet Weather, few spells of rain and thundershowers associated with lightning likely to continue over multiple districts of Odisha during the next 6-8 hours.

11:05AM:Storm surge of height of about 1.6 m near Mangrol, Junagadh district likely to inundate the low lying coastal areas today.

11:00AM: The sea condition is phenomenal over north Arabian Sea & Gujarat coast till 15th June 2019 and over northern parts of eastcentral Arabian Sea during next 12 hours, said PIB in its report.

The Sea condition is very likely to be very rough to high along & off north Maharashtra Coast today.

10:35AM: Cyclone Vayu may not hit Saurashtra coast. As per weather models , Vayu may skirt the Gujarat coast near Porbandar, close to Dwarka or Okha coast, reported Skymet Weather. 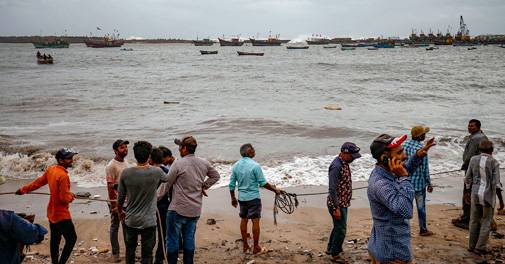 10:10AM: According to NDMA, Cyclone Vayu likely to move NNW for sometime and then NW skirting the Saurashtra  coast  affecting Gir Somnath,  Diu,Junagarh, Porbandar DevbhoomiDwarka with wind speed 135-145kmph gusting to 160kmph.Response teams on high alert.

Gujarat: Food packets being prepared by various groups in Rajkot, in the light of #CycloneVayu . The food packets will be dispatched to the cyclone affected areas of the state, as per the instructions by the govt officials. pic.twitter.com/c57aWFlIq5

10:05AM: Coming as a relief after a period of severe hot weather, Pune is likely to experience cloudy skies and scanty rain in the next few days. This is mainly due to a Cyclone Vayu which is hovering near the Mumbai coast.

10:00AM: Vayu is likely to encounter an anti-cyclone over North Arabian Sea today which will cause its stagnation near the Karachi Coast. There is also a possibility of Vayu making no landfall and weakening in the sea itself, Skymetweather reported.

9:55AM: As the Very Severe Cyclone Vayu moves west of Mumbai, maintaining a distance of 260 km from the coast, Mumbai is yet again gearing up for rains in the later parts of the day today. Rain intensity is set to increase, due to the movement of the storm. Cyclone Vayu will bring in winds gusting up to 60 kmph over the city, said Skymetweather.

9:50AM: Devotees visited Somnath Temple earlier this morning despite alert issued in view of Cyclone Vayu. 9:40AM: Around 52 teams of the NDRF and 11 columns (each having around 70 personnel) of the army have been deployed in the coastal districts.

Besides, 24 army columns have been kept reserved for any emergency situation.

9:35 AM: Cyclone Vayu is very likely to move north-northwestwards for sometime and then northwestwards skirting the Saurashtra coast affecting Gir Somnath, Diu, Junagarh, Porbandar and Devbhoomi Dwarka with wind speed between 135 and 145 kmph, gusting to 160 kmph from June 13 afternoon, the Cyclone Warning Division said in its latest bulletin.

9:30AM: The flight operations at airports in Porbandar, Diu, Bhavnagar, Keshod, Kandla will remain suspended for another 24 hours, said the Airports Authority of India.

9:25 AM: Extent of Cyclone Vayu is over 900km. So, even if the cyclone may not hit Porbandar, but the system may hit badly as strong winds and rainfall are a big threat, said IMD Mumbai.

9:20AM: Cyclonic Vayu to skit along Saurashtra Coast today in the afternoon with a wind speed 135-160 kmph. Diu, Gir Somnath, Junagarh, Porbandar, Dwarka will be affected, said Manorama Mohanty, scientist at IMD. #CycloneVayu to hit #Gujarat coast between Porbandar and Mahuva around Diu and Veraval on 13th Jun early morning as a very severe cyclonic storm with wund speed around 150 kmph gusting upto 170 kmph. pic.twitter.com/cqp0guzuBl

9:10AM: The National Disaster Response Force (NDRF) has issued an advisory to help people remain safe during the cyclone-induced bad weather conditions--

Gujarat: Six teams of National Disaster Response Force (NDRF) are on alert in Porbandar; #visuals of an NDRF team (of 30 members) standby at Chowpatty beach. As per latest update of IMD, #CycloneVayu won't hit Gujarat, but will have effect on coastal districts pic.twitter.com/Ux1x3u1XNO

9:05AM: In Rajkot, food packets are being prepared, which will be dispatched to the cyclone affected areas of the state.

9:00AM: In view of Cyclone Vayu in Arabian Sea coupled with high tide, all beaches in Kokan region have been shut off to the public. Visuals from Mahim beach in Mumbai

8:55AM: As many as 400 flights were affected due to bad weather caused by Cyclone Vayu. According to Gujarat airport official, 194 departing flights and 192 arrivals were delayed on Wednesday in the wake of the bad weather due to Vayu. 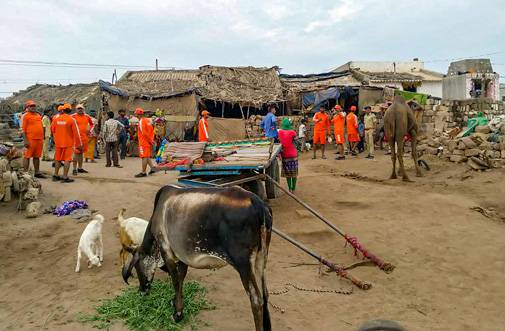 NDRF officials while carrying out an evacuation drive as Cyclone Vayu advances towards the Gujarat coast, in Porbandar. (Photo PTI)

8:45 AM: Cyclone Vayu will not hit Gujarat said the India Meteorological Department. The cyclone will pass nearby from Veraval, Porbandar, Dwarka.

However, the western coast is still on high alert as strong winds and heavy downpour are expected for the next 24 to 48 hours.

'It (Cyclone Vayu) may not make landfall. It will only skirt the coast. It has made a small deviation. But, its effect will be there with strong winds and heavy rain,' said M Rajeevan, Secretary at the Ministry of Earth Sciences