Indians living in New York and New Jersey states along with the officials of the diaspora organisation, Federation of Indian Associations (FIA) - raised slogans of 'Boycott Made in China', 'Bharat Mata Ki Jai' and 'Stop Chinese Aggression' among others 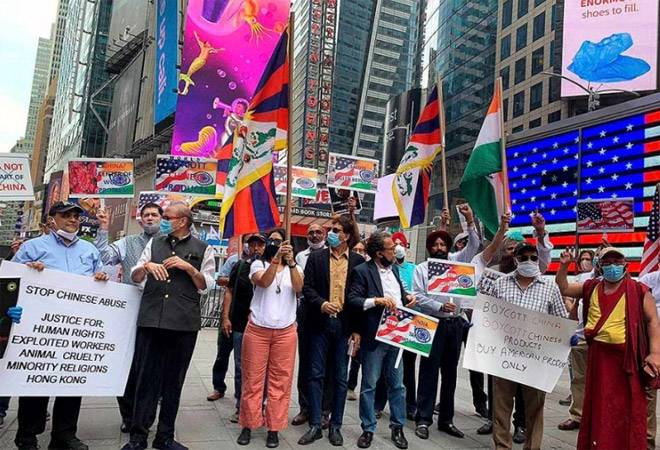 A large number of Indian-Americans chanting 'Bharat Mata Ki Jai' and other patriotic slogans staged a protest against China at the iconic Times Square here, demanding an economic boycott and a diplomatic isolation of the country for its aggression against India.

Indians living in New York and New Jersey states along with the officials of the diaspora organisation, Federation of Indian Associations (FIA) - raised slogans of 'Boycott Made in China', 'Bharat Mata Ki Jai' and 'Stop Chinese Aggression' among others.

The protesters, wearing face masks in view of the coronavirus pandemic, held placards that read 'We salute our fallen heroes'.

Members of the Tibetan and Taiwanese community also joined the protest and raised slogans against China and called for an economic boycott of the Communist giant.

"The India of today is different from the India of 1962. We will not tolerate the Chinese aggression and its international bullying. We will give a befitting reply to the arrogance of China," Bhandari, Jaipur Foot USA Chairman and a prominent social activist, told .

Bhandari said that he and the Indian community were deeply disturbed by the killing of 20 Indian soldiers during the violent clash with the Chinese troops in Ladakh's Galwan Valley last month.

"We are sending a strong message to China. The Indian community around the world is standing with its homeland," he said. China shares its borders with 14 nations and is fighting with 18 countries. It shows that it is a bully. Now is the time to stop this bullying and people believe India can do that, he said.

India believes in the philosophy of the 'World is one family' and while focusing on its self-reliance, it will also work for international peace and solidarity, he said.

Bhandari said he is planning to bring together diplomats from various nations -- from Australia to India -- on a common unifying platform against China.

President of the American India Public Affairs Committee Jagdish Sewhani said at the protest that at a time when the entire world is battling the deadly coronavirus, the "naked aggression" by China against its neighbours including India has exposed the true intentions of this "rogue Communist regime."

"I say it is rogue because the way China is treating its own people in Hong Kong" and is undertaking ethnic cleansing against the Muslims/Uyghurs in Xinjiang, he said.

The peace-loving people of the world want China to know that enough is enough. It immediately needs to stop its aggressive behaviour against its neighbours, including India, Sewhani said.

India has always called for a peaceful global order but "this approach of peace should not be considered as our weakness," he said.

Sewhani underlined that the India of 2020 is militarily and economically strong and has a "strong leader in Prime Minister Narendra Modi. India under him will give a befitting reply to the nefarious designs of President Xi Jinping of China."

He pointed out that the international community can hit China on three fronts -- trade, Tibet and Taiwan. The world should boycott Chinese products, support independence of Tibet and support Taiwan.

He added that today, China's entire population is under constant surveillance and now it wants to convert the entire world into a surveillance state. Its recent behaviour and action only prove this, Sewhani said.

Sewhani said that China should be ready to pay a "heavy price" for its aggression.

"It's time for the democratic and peace-loving people of the world to give a befitting reply to China. Time has come for the whole world to unite against this bully," he said.

Chairman of FIA Ankur Vaidya urged the international community to unite as one to express a collective and noticeable displeasure about China's unauthorised and unacceptable extension of boundaries in breach of UN treaties and disregarding sovereignty of free countries.

The Tibetan community said at the protest that it strongly condemns China's actions against India and its forces and the Chinese regime must be held accountable for flouting international law.

Bhandari said that he is throwing away all made in China furniture from his house in solidarity and to show that he is walking the talk, urging others to discard Chinese products from their homes.

The fact that so many people gathered in Times Square for the protest despite the COVID-19 pandemic demonstrates the strong show of support for India and against the Chinese aggression.

Lunar Eclipse July 2020 tonight: Timings in India, all you need to know about 'Buck Moon'