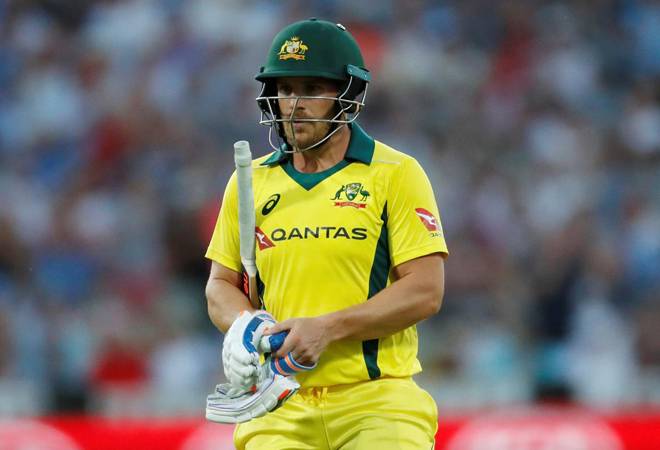 Absolutely no one can escape the prying gaze of Twitter users and Royal Challengers Bangalore batsman Aaron Finch is no exception. Australian batsman Aaron Finch was caught vaping during the Indian Premier League (IPL) match between Royal Challengers Bangalore and Rajasthan Royals, which the Virat Kohli-led RCB won by seven wickets at the Dubai International Stadium.

While the final over of the match was on and the RCB needed to score 10 runs off the final 6 balls while chasing a score of 178, the camera panned towards the RCB dressing room. It was at this very point that Aaron Finch was caught vaping as he exhaled smoke using an e-cigarette. The small video of Fitch vaping caught Twitter's attention.

A user by the name Abhijeet AK shared this video on his Twitter account and said, "Aaron Finch caught with the vape... is it allowed to use the vape while u r playing in the stadium and being a player in the team? Thanks to the camera man who showed what really happens in the IPL."

This is how the seriousness of a player in the ipl and we being a fans thinks other reason but you are doing is wrong pic.twitter.com/QLAUVSyVeE

Another user tweeted, "IPL is it legal to #vape inside the dressing rooms? What say Aaron Finch? Royal Challengers Bangalore, do you have anything to say? Virat Kohli was just standing ahead of Finch, I am sure he can vouch for what I saw!"

Another user by the name Subhayan Chakraborty tweeted, "Is vaping even allowed, especially when you are playing XI?"

Is vaping even allowed, especially when you are in the playing XI? #IPL2020#RRvRCB#AaronFinchhttps://t.co/Iq0QosIMCQ

A user by the name, Mohit Bararia asked whether it is allowed to vape either on ground or in the dressing room.

Is it under rules to vape in the ground or the dressing room ??#IPL2020@cricketaakash#Aaronfinch#cricket@IrfanPathan@imVkohli@SGanguly99@jatinsapruhttps://t.co/vbyvC6NXwk