State Health Minister KK Shylaja says another person (the third case) returned from China's Wuhan has been tested positive for novel Coronavirus; there are chances of more people testing positive, she adds 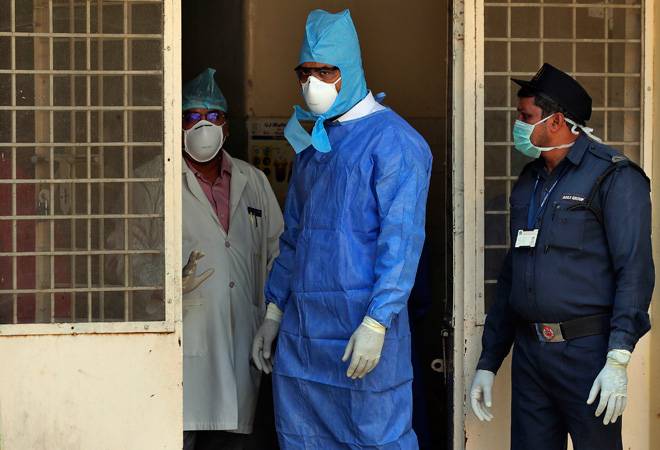 Efforts of Kerala in fighting Nipah virus were widely appreciated by international health agencies, including the WHO

Kerala, which today confirmed the third novel Coronavirus infection in the state and the country, is showing the world how to effectively monitor and fight the dreaded fast spreading disease, using the experience in taming the Nipah virus outbreak two years ago. The state government has declared the (coronavirus) epidemic "a state calamity" with nearly 2400 people under observation.

State health minister KK Shylaja said a third person returned from China's Wuhan has been tested positive for novel Coronavirus (2019 nCoV) adding that there are chances of more samples testing positive. The third patient is now undergoing treatment in an isolation facility in Kanhangad District hospital in Kasargod. The previous two cases were from Thrissur and Aalappuzha. About 140 samples have been sent to the National Virology Institute in Pune for testing and out of this, so far three have been tested positive and 36 were tested negative. A total of nearly 1,999 people are under observation in the state, of which 75 have been taken to isolation wards in various hospitals and the remaining 1924 have been quarantined at home.

Sources said the three patients are medical students in Wuhan and travelled together back to India, after the outbreak in China. Every year, hundreds of medical students from India, especially South India, go to Chinese medical universities for studying MBBS, as these universities offer cheap medical education at Rs.25-Rs.35 lakh as opposed to between Rs 40 lakh to Rs 50 lakh in Russia, Georgia and Australia. In India, self-financed private medical colleges charge much higher than these overseas medical teaching havens.

Shylaja's statement in the Kerala Assembly shows how the state was prepared to tackle any possibility of the virus spreading. "We took the necessary precaution on a war footing immediately after the World Health Organisation (WHO) alerted the world on the virus", she said. The state, which effectively implemented WHO guidelines and protocols to prevent spreading of Nipah virus in 2018, urgently initiated preventive measures and put in place the requisite infrastructure, in consultation with the union health ministry.

Headed by the minister herself, a high level Emergency Rapid Response Team (ERRT) was constituted to decide on protocols on observation and isolation of suspected cases, treatment guidelines, training for paramedics, drivers, support staff and awareness among public. The State ensured activation of isolation wards in all districts, besides roping in the private sector to prepare isolation wards in the case of an emergency. A campaign was launched directing people returned from China to report to district medical officers. Health professionals were roped into constantly monitor suspected cases.

The first patient was confirmed by the Union health ministry on January 30. The patient had voluntarily got admitted to the district hospital in Thrissur. Immediately the state machinery initiated 'contact tracing' to find who all the patient mingled in the past couple of weeks, as the virus' incubation period is about two weeks. Another suspected patient, who was isolated in Aalappuzha medical college on January 24, was confirmed positive on February 2. By that time, her 'contacts' were traced and all got either isolated or brought under observation. If it took three days for samples to be tested in Pune, the state set up a testing centre in Aalappuzha, so that results can be obtained the same day itself.

By then, Kerala had set up state and district level control rooms, with daily meetings and assessment led by the Principal Secretary of the State health department and the minister. State run Kerala Medical Services Corporation (KMSCL) was directed to ensure adequate storage and supply of masks, gloves, medicines, safety suits, protective gears, medicines etc.

Various government departments, police are seamlessly coordinating to counter an emergency disease outbreak. Wide publicity has been given through media on precautions to be taken, and the public can call a toll free number to report suspected cases. Meanwhile, action will be taken against those returning from Wuhan but fail to report to authorities.

When the Nipah virus spread in two northern districts of Kerala, experts could quickly identify the virus and rapidly implement war footing measures to tame its spread to certain pockets in these districts. However, the deadly brain damaging bat-borne disease had killed 17 people in those two districts in short time.

Later, a Malayalam film 'Virus' was made based on the efforts in finding the Nipah virus and fight of the state to counter the disease. Efforts of Kerala in fighting the Nipah virus were widely appreciated by international health agencies including the WHO and the Institute of Human Virology in Baltimore honoured the Chief Minister Pinarayi Vijayan and Shylaja for in successfully fighting the virus.