Prashant Bhushan found guilty: Top court on July 22 had issued a show-cause notice to Prashant Bhushan after initiating criminal contempt against him after taking note of a petition that said his tweets on CJI and judiciary amounted to obstruction of justice 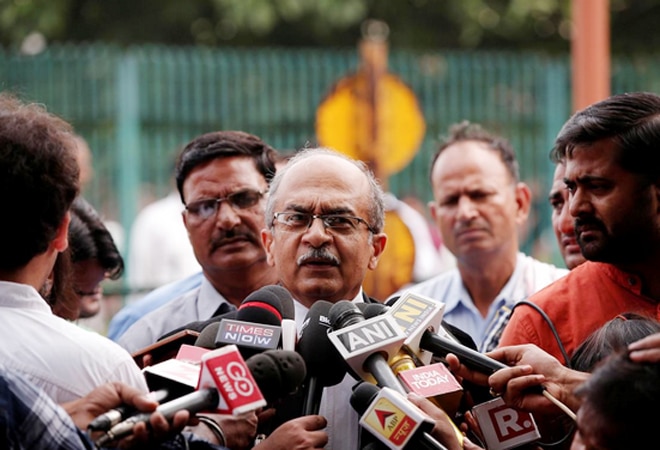 Prashant Bhushan, in his August 2 affidavit, had said he only regretted a part of his tweets

Senior lawyer Prashant Bhushan was found guilty of contempt of court for two of his tweets on Chief Justice of India SA Bobde and the Supreme Court today. While delivering the verdict, the apex court bench comprising Arun Misra, BR Gavai and Krishna Muraru decided to announce the sentence on August 20.

Notably, the top court on July 22 had issued a show-cause notice to Bhushan after initiating the criminal contempt against him after taking note of a petition.

Prashant Bhushan, who's also a well-known public interest litigation activist, in his August 2 affidavit said he only regretted a part of his tweets. Defending his two tweets, Bhushan said his tweets were against the judges regarding their conduct in their "personal capacity" and they did not obstruct the administration of justice.

He also said his criticism of the CJI didn't mean it lowered the dignity or "scandalise" the apex court. The apex court had on August 5 reserved its verdict in the matter.

Bhushan had earlier tweeted a photo of CJI Bobde sitting on a bike. However, his August 2 affidavit statement said he regretted asking why justice Bobde was not wearing a helmet since it was on a stand.

He said nonetheless, he was exercising his freedom of speech and that it did not amount to "obstruction of justice". "At the outset, I admit that I did not notice that the bike was on a stand and therefore wearing a helmet was not required. I, therefore, regret that part of my tweet. However, I stand by the remaining part of what I have stated in my tweet..." the affidavit added.

His lawyer, Dushyant Dave also said Bhushan's tweets were not against the institution but judges in his capacity, which did not amount to obstruction of justice.

Supreme Court to give verdict on payment tenure of AGR dues

BPCL privatisation likely to be completed by March 2021