Shashi Tharoor responds to Pak comedian's video on his English, asks him to make next one on Imran Khan 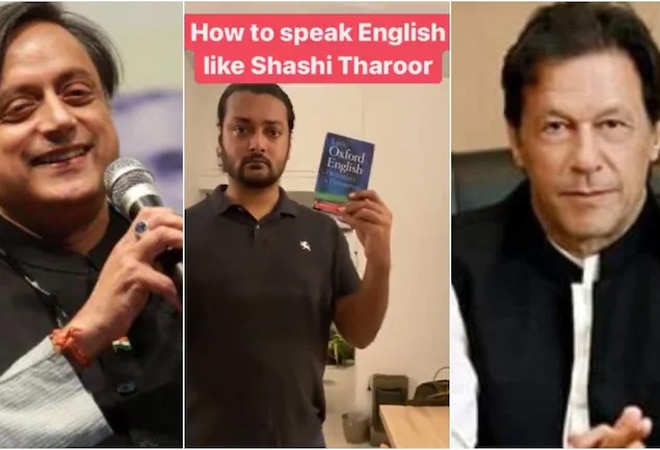 Congress leader Shashi Tharoor, known for firing incomprehensible words like salvos, yet again finds mention in an amusing video, this time by a comic from the neighbouring country.

His "exasperated farrago" of unfathomable words and to-the-point accent is so noteworthy across the border that a Pakistani comedian recently made an uproarious video where he talks about ways one can speak English like Tharoor and ace it.

The video is such a riot that it even left the Thiruvananthapuram MP impressed. Akbar Chaudry, a Pakistani comic, shared the video with the caption, "How to speak English like @ShashiTharoor #ShashiTharoor #Defenestrate #Farrago #Floccinaucinihilipilification (sic)."

Also Read: 'Epicaricacy': Shashi Tharoor trolls Australia with word of the day; here's what it means

The comedian demonstrates how to speak English with Tharoorian perfection in three steps. The video begins with Akbar tossing a copy of the Oxford Dictionary into a juicer and then drinking the smoothie.

Illustrating step two, the comic sits on a sofa with two drips attached to his arms - one connected to a laptop playing Tharoor's video and another to a saline bottle labelled Oxford Dictionary.

The third and last step exhibits Akbar throwing the dictionary into a pestle and mortar to pulverising it into a mixture and then snorting the powder.

As soon as he finishes with all three steps, the scene shifts and the comic starts spouting platitudes like Tharoor, and lip-syncing to the politician's viral speeches.

Take a look at the video

The Congress leader and Thiruvananthapuram MP, like others, chuckled at the video, retweeting it with a post. Tharoor also had a special request. "Next one on @ImranKhanPTI please!?> @AkbarChaudry (sic)," he tweeted.

🤣🙏 Next one on @ImranKhanPTI please!?> @AkbarChaudryhttps://t.co/nJnZ8XheDV

The clip has garnered over 7.5K likes and 1.3k retweets, leaving the internet ROFLing. This is not the first time that Tharoor has become the butt of netizens' jokes, a lot of funny tutorials, memes, and GIFs on 'Tharoorian English' had also made their way to the internet in the past.