In the year 2019 and 2018, the average listing day gains were less than half of that in the current year. The sharpest rise went up to 128 per cent while the lowest came down to (-) 21 per cent

2020 has been a difficult year for many, but the bumper show by Dalal Street newcomers will make it a memorable one. The attractive strike rate of recent debutants in terms of listing day gains is a wonderful success story of the year going by.

On an average, 14 new listings have fetched listing gains of nearly 45 per cent, the highest in 10 years. Among them, three gave returns of over 100 per cent while another seven fetched over 10 per cent returns (based on closing price on listing date -- Burger King gave a stupendous return of 131 per cent followed by Happiest Minds Technologies (123 per cent), and Mrs. Bectors Food Specialities (107 per cent). Meanwhile, shares of four new issues, which also include SBI Cards, listed at a loss. Further, all 14 IPOs listed thus far are trading between 1 and 220 per cent above the issue price based on their closing price of December 24, 2020.

In the year 2019 and 2018, the average listing day gains were less than half of that in the current year. The sharpest rise went up to 128 per cent while the lowest came down to (-)21 per cent. 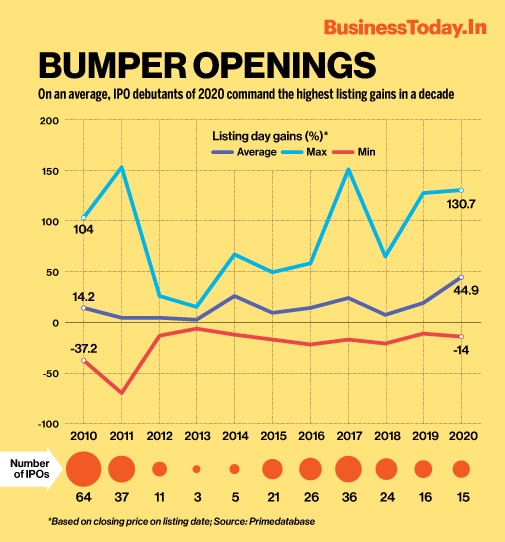 With the dearth of initial public offerings in the first half of the year, the sole exception being SBI Cards, the floodgates opened in latter half after all other 14 issues hit the market during that period. Altogether, they raised Rs 26,611 crore, posting a huge jump of 115 per cent from the Rs 12,362 crore mobilised through 16 IPOs in 2019.

The overall response from the public to the mainboard IPOs this year, was very good reinforced by an incredible participation from retail investors. According to Pranav Haldea, Managing Director, PRIME Database Group, response to IPOs was further buoyed by strong listing performance. "The continuing buoyancy in secondary markets as also the listing performance of IPOs in the last few months have provided impetus to the primary market. The IPO pipeline continues to remain strong with 28 companies holding SEBI approval wanting to raise nearly Rs 28,706 crore and another seven companies wanting to raise nearly Rs 4,410 crore awaiting SEBI approval," he adds.