Cyclone Amphan updates: A tree falls on power lines during strong winds due to Cyclone Amphan at Kakdwip near Sunderbans in West Bengal.
BusinessToday.In

West Bengal Chief Minister Mamata Banerjee has said that super cyclone Amphan, that hit the state on Wednesday (May 20), could cause damages worth Rs 1 lakh crore. The CM, who has been monitoring the situation, said the impact of Amphan was "worse than coronavirus".

Cyclone Amphan has killed 12 people in the state and has left behind a trail of destruction by uprooting trees, disrupting power supply and swamping roads and houses. 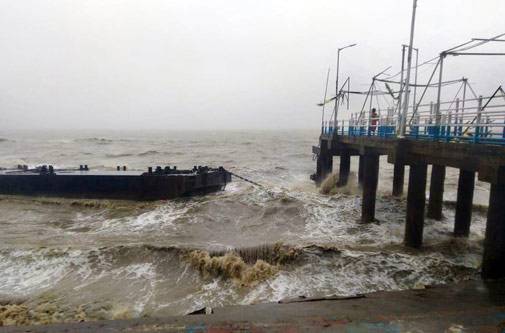 The Kachuberia jetty collapses at Bakkhali due to the impact of Cyclone Amphan, near Sunderbans area in South 24 Parganas district of West Bengal.

Cyclone Amphan barrelled out of the Bay of Bengal with gusting winds of up to 185 km per hour (115 mph) and a storm surge of around five metres in West Bengal on Wednesday evening.

CM Banerjee stated that, "Area after area have been devastated. Communications are disrupted".

"Nandigram and Ramnagar are the two districts of North and South 24 Parganas that are destroyed completely,"  Banerjee said.

In Hoogly district of West Bengal, thousands of mud homes were damaged by raging winds. The mobile and internet services were also down in North 24 Paraganas and South Paraganas due to the impact of cyclone Amphan. Slum dwellers residing along the railroad tracks clear tree branches from tracks in the aftermath of super cyclone Amphan, in Kolkata. Alipore in central Kolkata recorded a massive 222 mm of rainfall and Dumdum 194 mm between 8 am and 8:30 pm on Wednesday. Even when the rain stopped in most parts of Kolkata after 9 pm, high-velocity winds continued to sweep the state. Almost the entire Kolkata was plunged into darkness yesterday as electric supply either got snapped due to rain and wind or was suspended as a precautionary measure.