The Asian champions scored a stunning equaliser through Saleh Al Shehri just a few minutes into the second half. Then Salem Al Dawsari doubled the lead for his side, courtesy of a brilliant solo goal.

In the first half, Lionel Messi opened the scoring from the spot after VAR intervention saw Argentina earn a penalty against Saudi Arabia.

On his fifth and final quest for the only major trophy to elude him, the 35-year-old Messi scored a 10th minute penalty in a dominant first half display where he and Lautaro Martinez also had three goals disallowed for offside. Just minutes into the second half, Saudi Arabia scored a stunning equaliser through Saleh Al Shehri and then Salem Al Dawsari doubled the lead for his side, courtesy of a brilliant solo goal. Despite plenty of possession after that, Argentina were unable to penetrate Saudi Arabia, who were competing in their sixth World Cup but had never previously won an opening game.

The entire game was played in an extraordinary atmosphere at the Lusail Stadium, with Argentina's traditionally massive and raucous following matched by the thousands of Saudis who had come over the border to cheer on their team.

The result broke Argentina's amazing 36-match undefeated run and stopped them from matching the previous international record of 37 games unbeaten held by Italy.

Football enthusiasts were taken aback with the shocking win. Twitter users mocked Argentina team and called it the worst possible start for Lionel Messi and his team. 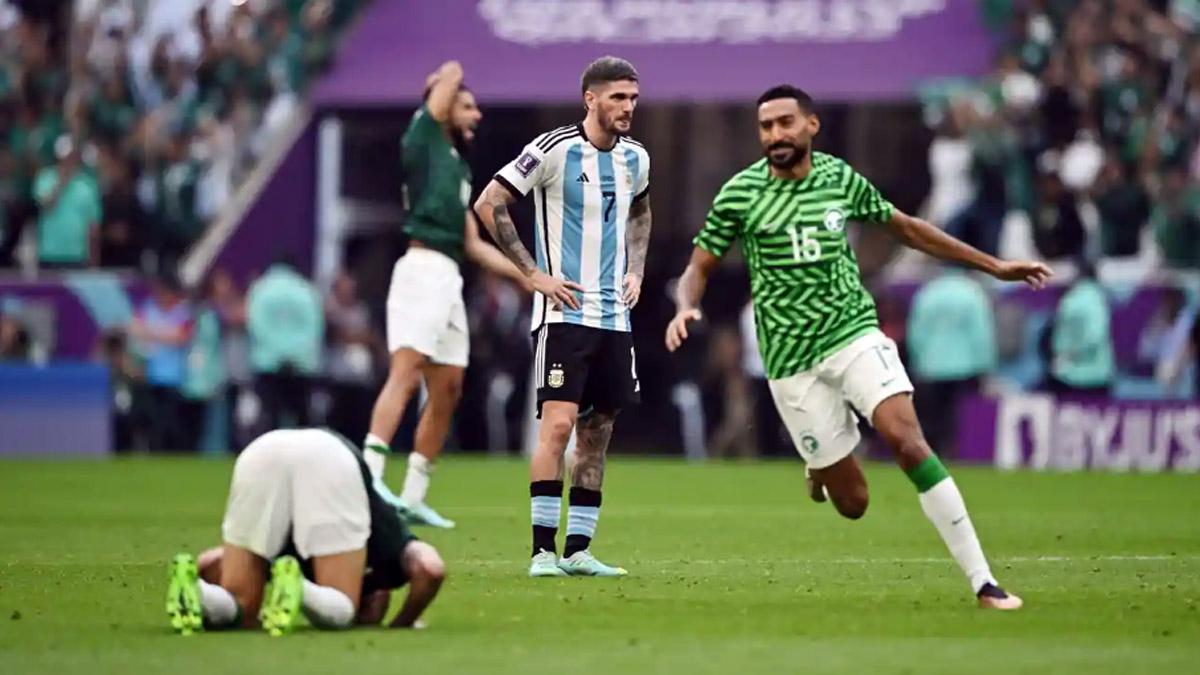 Argentina with a pathetic performance?

The two goals in a five minute spell also saw La Albiceleste's 36-game uneaten run, dating back to 2019 where they lost to Brazil in the Copa America. The Asian country with a risky high defensive line were lucky in the first half when when three times Argentina had put the ball in the net, but were declined by an offside call.

But things took a sudden turn after the Saudis took over the field and dominated Lionel Scaloni’s team and scored twice against the South Americans for the first time in five attempts.

Al-Dawsari’s goal is very beautiful 🤩
He was playing in Argentina’s penalty box😂😂 pic.twitter.com/MOqUYYmMFg

Won the 2012 Africa Cup of Nations with Zambia.

Won the 2015 Africa Cup of Nations with Ivory Coast.

Leads Saudi Arabia to a surprise victory over Argentina in the 2022 World Cup.

It's time to familiarise yourself with the tactical genius that is coach Herve Renard 🧠 pic.twitter.com/ynJ3XYpbjt

Messi literally kicked off Argentina's 2022 FIFA World Cup campaign with an easy kick from the penalty spot sending the Saudi Arabian goal-keeper on the wrong side. The ace footballer surpassed Gabriel Batistuta (1994, 1998 and 2002) and Diego Maradona (1982, 1986 and 1994) records by becoming the first player to score for Argentina at four World Cup events. Interestingly, Messi is the only fifth player to score a goal at four different World Cup events. But alas, the record didn't help the team. Twitter users shared their hilarious reactions.

"Argentina is winning the world cup, we have Messi, he's the GOAT"

Lionel Scaloni's men face Mexico on November 26, where they'll most likely need a win for any chance of making it out of Group C.