Tiger Census: During the release of the estimation figures, PM Modi also said that India is now one of the safest habitats in the world for tigers. 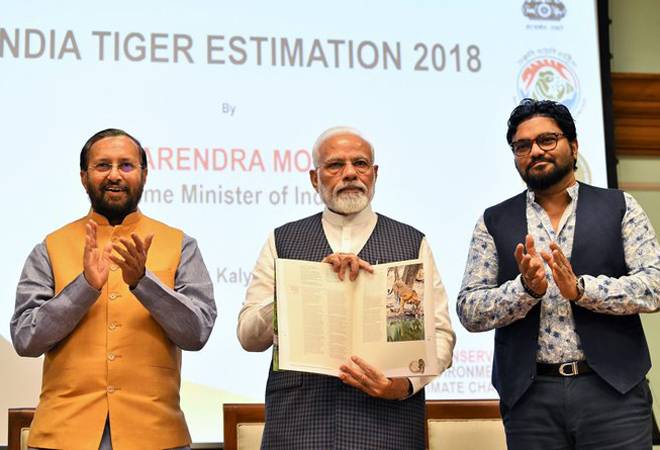 PM Modi released the tiger estimation figures on Monday and said that India has achieved the target of doubling the tiger count four years ahead of the deadline. The country now has 2,967 tigers, which has been the result of a growth of 33 per cent in the fourth cycle of the Tiger Census.

"Today we reaffirm our commitment towards protecting tigers. Results of the just declared Tiger Census would make every Indian happy. Nine years ago it was decided in St. Petersburg that target of doubling tiger population will be 2022. We completed this target 4 years early," said the Prime Minister at the release of the All India Tiger Estimation Report 2018.

The leader also cracked a pun and said, "The story that started with Ek Tha Tiger and then continued with Tiger Zinda Hai, should not stop there. It should be baaghon mein bahaar hai."

Count of Tigers in India rises to 2967; PM @narendramodi describes this as a historic achievement.

As mentioned in the Tiger Census, Madhya Pradesh has the highest number of tigers at 526, followed by Karnataka at 524 and Uttarakhand at 442. However, not all is rosy in Chhattisgarh and Mizoram that have seen a decline in the numbers. Odisha maintained its tiger count.

PM Modi also said that India is now one of the safest habitats in the world for tigers.