Amethi Election Result 2019: Rahul Gandhi is facing a tough fight against BJP's Smriti Irani with the fiery right-wing leader leading against the Congress President from Amethi, according to early trends 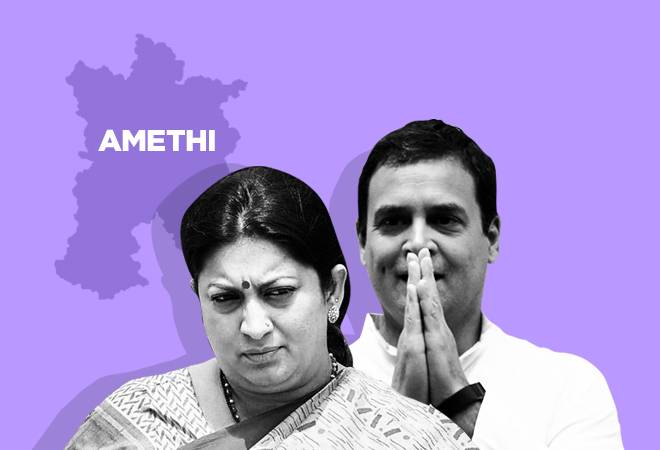 Amethi Election Result 2019: Rahul Gandhi's candidature from Wayanad is being seen as a backup plan in case he loses from their stronghold seat.

Rahul Gandhi faced a tough fight against BJP's Smriti Irani with the fiery right-wing leader winning against the Congress President from Amethi. Smriti Irani's victory against Rahul Gandhi in the Amethi Lok Sabha election result, is perhaps the biggest upset of this year's elections.

Rahul Gandhi contested from what was a pocket borough of the Congress. When Sonia Gandhi last fought from Amethi in 1999 against BJP's Sanjay Singh, she won by a clear margin of 48.07%. As she moved to Raebareli, her son Rahul Gandhi moved in to fill the gap. Rahul Gandhi did one better and won with a margin of 49.33% in 2004. He came back as the MP in Amethi in the two following elections. In 2009, Rahul Gandhi emerged a clear favourite with a margin of 57.24. However, when Narendra Modi launched his juggernaut of a campaign for 2014, the vote share of Congress shrank at an unprecedented pace, ousting the grand old party from their reign of 10 years. Rahul Gandhi managed yet another win in 2014 but not without a massive scare. His margin had shrunk drastically to 12.33% in 2014.

That year it was Smriti Irani who faced the Gandhi in Amethi. While the general election outcome was propelled by a strong anti-incumbency mood, not giving Irani her due would be doing the BJP leader a disservice.

From the time she took on Rahul Gandhi, Smriti Irani has been relentlessly and vocally criticising the Congress President and the party. Her criticism is perhaps instrumental in slowing chipping away at the Congress' votes.

Rahul Gandhi's decision to file a second nomination from Wayanad, against this backdrop, has been raising eyebrows.

Meanwhile, Rahul Gandhi who fought from two seats won from Wayanad. He was expected to do so as it was anticipated to be a one-sided battle. Following Gandhi's victory in 2014 general elections, the Congress did not manage to win any of the panchayat polls in Amethi. Out of the two municipal corporations, one - Gauriganj - went to Samajwadi Party and the other, Jayas or Jais, went to BJP. In 2015, BJP won the Amethi Nagar Panchayat as well. A severe blow was dealt to the Congress when the party did not win any of the five assembly seats under the Amethi Lok Sabha seat in 2017. SP maintained its hold on Gauriganj, while BJP wrested Amethi, Tiloi, Jagdishpur and Salon assembly seats.

While Congress and star campaigner Priyanka Gandhi have thrown their full might behind their leader in Amethi for the Lok Sabha Elections 2019, Rahul Gandhi's candidature from Wayanad was seen as a backup plan in case he loses from their stronghold seat.