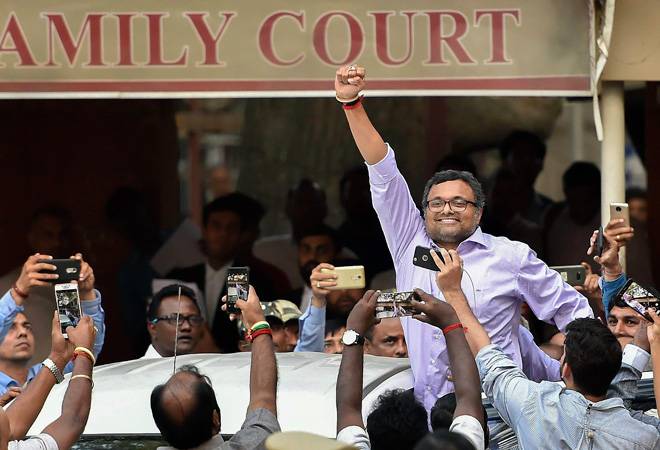 In 2014 general election, the AIADMK, which contested alone from here, had won. The DMK was the first-runner up.  AIADMK's PR Senthilnathan won from Sivaganga by a margin of over 2 lakh votes from Dhuraj Raaj Subha of the DMK in the last general election.

However, both Karti and Raja are in search of their maiden victory from this Lok Sabha seat. This is the second time Karti is contesting from Sivaganga while Raja is trying his luck from here for the third time. In 2014, Raja stood third by securing about 1.34 lakh votes and Karti, fourth with 1.05 lakh votes. Last time, Karti contested without an alliance.

Sivaganga is Karti's  father and former finance minister P Chidambaram's stronghold from where the senior Congress leader was elected to Lok Sabha a record seven times -- 1984, 1989, 1991,1996, 1998, 2004 and 2009. Chidambaram lost only once in 1999 to E. M. Sudarsana Natchiappan when he contested on Tamil Maanila Congress (TMC) ticket.

Initially, Natchiappan and Karti were the two contenders for the Congress ticket from Sivaganga. But Natchiappan opposed Karti's nomination over the corruption charges against Karti. CBI and ED probing Karti in INX media case. He was arrested by CBI in 2018 and had spent more than a fortnight at the Tihar jail in Delhi. Natchiappan said that corruption charges against Chidambaram would bring a bad name to the Congress. However, later, Natchiappan made peace with Karti and pledged to work for his victory.