Lok Sabha Election 2019 Results: The Northeastern states send 25 Members of Parliament, out of which the maximum is sent by Assam at 14. 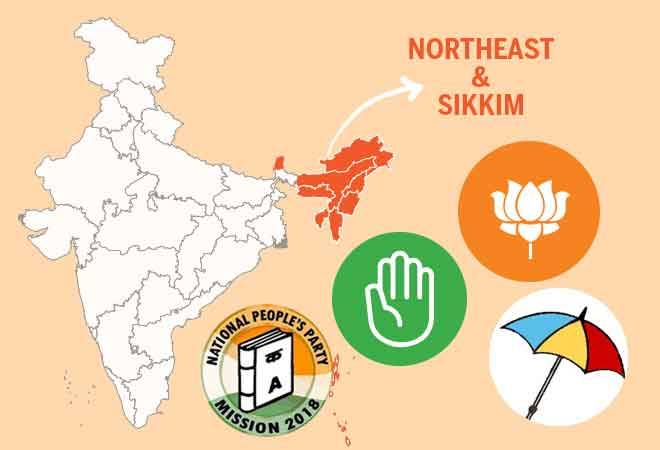 One of the hardest regions to conquer would be the secluded Northeastern states that have long been the stronghold of a combination of regional parties and the grand old Congress. However, it seems like the Modi wave might have done significant damage to the existing political scenario. The BJP is expected to sweep Assam and garner as many as 20 of the 25 seats in the Northeast.

Collectively, the Northeastern states send 25 Members of Parliament, out of which the maximum is sent by Assam at 14, followed by two each from Arunachal Pradesh, Meghalaya, Tripura and Manipur and one each from Sikkim, Nagaland and Mizoram. The elections were wrapped up in the states in the first three phases out of the seven.

The India Today-Axis My India exit poll had predicted that BJP would not only establish domination but is likely to push Congress out with as many as 12 seats out of the 14 in the state of Assam. If this comes true, then in Assam alone the BJP would win more than what they had won in the entire Northeast in the 2014 Lok Sabha Elections. This is quite a revelation for a state that has been reeling under the National Register of Citizens (NRC) and Citizenship Amendment Bill issues. In short, the anti-incumbency mood was estimated to be quite strong in the state.

Additionally, trends suggest that the party is likely to sweep Arunachal Pradesh, Manipur and Tripura and bag one seat in Meghalaya as well. It is likely to maintain its grip over Nagaland and Mizoram. The regional parties might act as a roadblock in Sikkim and the other seat in Meghalaya.

In 2014, BJP had won seven seats in Assam, Congress and All India United Democratic Front (AIUDF) had won three each and one was secured by an independent candidate. Congress had bagged both the seats in Manipur, while CPM had done the same in Tripura. Congress had also managed to win one seat each in Arunachal Pradesh, Meghalaya and the single seat in Mizoram. Arunachal Pradesh saw BJP securing the other seat and National People's Party winning the Tura seat in Meghalaya, while Sikkim Democratic Front and Naga People's Front won the lone seats in Sikkim and Nagaland respectively.