Rahul Gandhi says he was on INS Viraat, but it was not a holiday 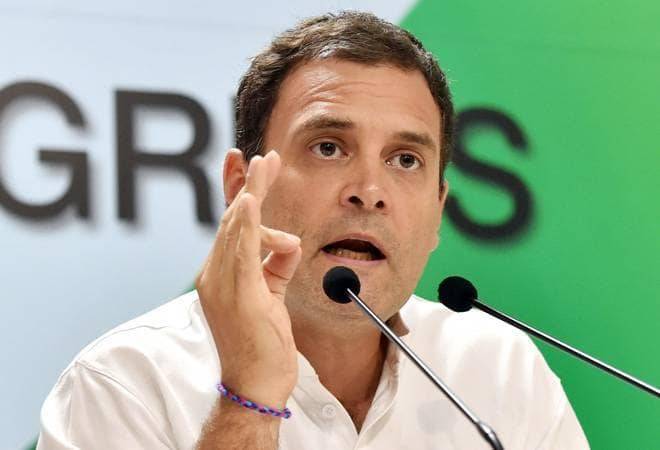 Amid the raging controversy over former prime minister Rajiv Gandhi using Indian Naval warship INS Viraat to vacation in the Lakshadweep, his son Rahul Gandhi continues to defend the family's actions. The Congress President told the Hindustan Times that while he did visit the aircraft carrier with his father, it was not a holiday, but an official trip. "Why would anyone holiday on an aircraft carrier? It's not a cruise ship!" he told the daily.

Gandhi also accused Prime Minister Narendra Modi of being "obsessed" with his family. "I don't think about my father, grandmother or great-grandfather as much as Mr Modi does. He thinks that that's the place where he's going to find his escape. Best of luck to him!'' he added in the interview.

On Wednesday, Modi had accused the Gandhi family of using INS Viraat as its "personal taxi" for a holiday back in 1987 while speaking at a rally in Delhi. "Ever imagined that a premier warship of the Indian armed forces could be used as a taxi for a personal holiday? One dynasty did it," Modi had said, launching a fresh attack on the late Congress leader days after throwing the "Bhrashtachari no 1" barb.

"Rahul Gandhi says the armed forces are no one's personal forces. But the Gandhis used INS Viraat as their personal taxi when Rajiv Gandhi as Prime Minister was on a 10-day holiday. The ship was on duty but was diverted to pick up the Gandhis," Modi had said at the rally. He further claimed that the Indian Navy was made to host the Gandhi family and Rajiv Gandhi's in-laws, while a helicopter was also deployed in their service.

The Congress was quick to hit back, calling Modi a "serial liar" who has made Indian Air Force jets his "own taxi". The party spokesperson Pawan Khera also pointed out that retired Indian Navy Vice Admiral Vinod Pasricha had clarified that Rajiv Gandhi had been on an official visit on INS Viraat, not on a vacation. "But facts don't matter to Modi. He doesn't have anything to talk about his own achievements. Rahul Gandhi has been challenging him for the last six months now to debate on the Rafale deal, demonetisation, unemployment, but Modi does not have the courage to speak," Khera said at a press conference.

The Congress President, too, picked up Modi's allegations at an election rally in Haryana on Thursday. "If you have to talk about Rajiv Gandhi and about me, do so definitely," Gandhi said, adding, "But first explain what you have done on the Rafale issue. You should also explain to the people your unkept promise of 2 crore jobs for the youth." He also put the spotlight on Modi's other electoral promises such as giving farmers the right price for their produce and putting Rs 15 lakh into bank accounts.

Gandhi also told the daily that he thinks about India much more than the PM does, challenging Modi's image of working 24x7. "I will bet you, whatever you want, that as far as thinking about India is concerned, I'm spending at least 10 times the amount of time that Mr Narendra Modi is spending," said Gandhi, adding that the best test of this would be a debate between him and the prime minister.

Also read: Modi lists out abuses hurled at him, says Cong did not even spare his mother