The share of cash-strapped Jet Airways has hit 5 per cent lower circuit in intra-day trade on Tuesday after reports suggested that two potential investors, Volcan Investments and Eithad Airways, decided to back out. 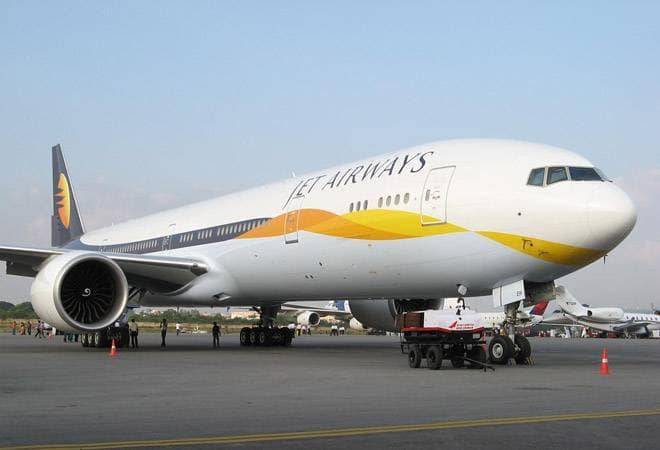 Weighed down by the development, the share price of Jet Airways fell 4.91% in opening trade and locked in the lower circuit at Rs 44.55.

The share of cash-strapped Jet Airways has hit 5 per cent lower circuit in intra-day trade on Tuesday after reports suggested that two potential investors, Volcan Investments and Eithad Airways, decided to back out. Anil Agarwal-led Volcan Investments had submitted an Expression of Interest (EOI) to acquire a stake in Jet Airways. However on Monday, the company stated that it decided to back away from Jet Airways based on its evaluations and other priorities.

Weighed down by the development, the share price of Jet Airways fell 4.91% in opening trade and locked in the lower circuit at Rs 44.55, against the Friday's close of Rs 46.85. Jet Airways stock has fallen after 7 days of consecutive gain.

Jet Airways stock has fallen 83.10% year to date and 79% from Rs 217.70 to Rs 44.50, since April 17, 2019, when the airline declared that it has suspended all its domestic and international flight operations since no emergency funding was forthcoming from the lenders or any other source.

The script stands with the market capitalisation of Rs 506.07 crore with its negative Price to Book Value at -0.07 as well as Price to earning at -0.12.

According to PTI report, the banks received Expressions of Interest (EoIs) from 3 entities, of which 2 are financial players and another is a player in the global aviation space.

Apart from Volcan, the airline has received other 2 offers by Russian treasury fund RA Creator, Panama-based Avantulo Group in this round of Expressions of Interest (EOI) process.

Similarly, the Hinduja group which had shown interest earlier to bid for Jet also did not come forward this time. Etihad Airways also declined to lodge an expression of interest in Jet Airways (India) Ltd, stating,"it was neither feasible for nor responsible of Etihad to reinvest in Jet at this time." The Gulf airline had acquired 24% stake in the airline in 2013.

Last month the Resolution Professional- Grant Thornton's Ashish Chhawchharia had floated EoIs for selling stake in the airline. The prospective bidders were invited to express interest and deadline for the same was later extended to August 10.

A consortium of 26 banks led by the State Bank of India, who had been owning the airline since March 25 with 51 % stake approached the tribunal- Mumbai bench of NCLT, on June 20 to recover dues of more than Rs 8,500 crore, after which the debt-ridden Jet Airways was admitted for insolvency proceedings.