Investing rush! A million new demat accounts for 5th month in a row

Nearly 1.3 million new accounts were added in September. There was a surge in retail participation in the stock market after people were forced to stay home since the outbreak of the coronavirus pandemic As bull frenzy grips the stock market, retail investors continue flocking to equities. Industry data showed that a million new dematerialised or demat accounts were opened for a fifth straight month in October, taking the total tally to 47.6 million. Nearly 1.3 million new accounts were added in September. There was a surge in retail participation in the stock market after people were forced to stay home since the outbreak of the coronavirus pandemic. Subsequently, a record 6.8 million new demat accounts were opened between April and October 2020. Only the first two months of the fiscal saw an addition of less than a million retail accounts.

Almost 4.9 million new demat accounts were opened during financial year 2020, the maximum in decade, after 4 million accounts were added in the previous year. Besides, on an average, 4.3 million new accounts have been opened over the past three years. 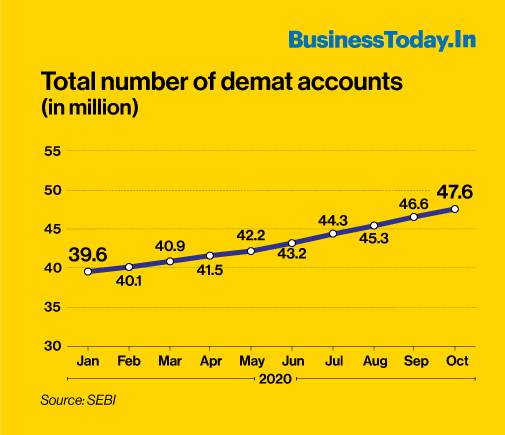 Markets have recovered massively since March lows and rallied close to 77 per cent. Amid gush of new investors, share of mobile trading witnessed a spike too. It has seen a double-digit contribution in overall trading since June 2020 and reached a new high of 18.5 per cent in November from 17.6 per cent in October.

The blue-chip index Sensex gained 4 per cent in October despite falling on the final three days of the month, while the mid and small-cap index ticked up by 1 per cent and 15 basis points, respectively. The rally was underpinned by better-than-expected manufacturing and industrial output data and a positive series of earnings beats. This aided Indian markets against worsening outlook elsewhere in Europe and the United States - the Dow Jones Industrial Average and S&P Europe 350 were down approximately by 4 per cent and 6 per cent, respectively, during the month .

The overall structure of the market continues to remain positive given consistent FPI inflows, RBI's strong support towards economy and developments on the vaccine front. "Sustenance of the demand recovery after the festive season would be key to watch out for. Globally, investors would track progress on US stimulus which is again gaining momentum. ECB interest rate decision this week would also be kept on radar," says Siddhartha Khemka, Head - Retail Research, Motilal Oswal Financial Services in a note.