The biggest trigger for markets has been the rush of liquidity from domestic investors, which experts say has taken them far above what current fundamentals justify.

After hitting an all time high of 33,865.95 on November 7, 2017, BSE Sensex has moved in a range of 1,000 to 1,300 points. And on Tuesday, the BSE Sensex traded close to its high at 33,709.69. The biggest trigger for markets has been the rush of liquidity from domestic investors, which experts say has taken them far above what current fundamentals justify. "We believe the Indian market is overvalued," says Saurabh Mukherjea, CEO, Ambit Capital.
Experts say poor corporate results make it difficult to justify the steep, and rising valuations. No big improvement is expected in the next two quarters.

"When investor sentiment is positive, one should be cautious," says S. Naren, Executive Director & CIO, ICICI Prudential AMC. "We are in a midway phase. It's neither a bull nor a bear market and, therefore, there is no scope to give a proper call. While valuations aren't cheap, the cycle has not peaked either. The only call is to stay put with old investments and be careful while making new ones." Naren says the Indian market can be best described as standing at a signal where the light is yellow. It's neither red, where one can say sell, and it's neither green, where one can keep buying, he says, adding that banking and infrastructure can deliver high returns, though they are also risky. He says pharmaceutical and IT are cheap if one wants to invest for the long term but not much sought after due to regulatory issues in their biggest market -- the US. A strong rupee is also impacting their huge dollar revenues.

These two sectors, he says, can work for a classic value investing strategy. "Buy plays on financial savings and companies in sectors where the black economy is getting smaller," says Mukherjea of Ambit Capital. While most experts suggest caution, it's clear that the focus should remain on large caps. "As there has been a convergence between large-cap and mid- and small-cap stocks, the view is clearly to pick the large-cap stocks," says Naren.

"It's purely a stock picker's market where a bottom-up approach will work. You can't invest across the board as the valuation of the overall market is high. Therefore, consider companies with stable businesses and strong balance sheets that have a record of creating value. Most important, these should be available at a discount to their intrinsic value," says Vikas Gupta, Chief Investment Strategist and CIO of Omniscience Capital.

Study Tour
BT, with Omniscience Capital, a Mumbai-based hedge fund, conducted a study to find value stocks. In keeping with Naren's view that it makes sense to invest in large caps in this market, we selected 239 companies with market capitalisation of Rs 10,000 crore-plus for the study. These 239 companies represent nearly 80 per cent of the Indian stock market universe.

The study's findings are quite interesting. The list of 37 buys the filter throws up (for methodology, see Selecting Value Buys) does not have stocks from telecom sectors. The list is dominated by technology, basic material, consumer goods and oil & gas companies. "These are companies that have strong balance sheets, stable business operations and enough financial resources to handle the near-term uncertainties. However, there is some unpredictability in near-term growth in earnings or some other short-term issue," says Gupta.

"The list of 37 companies looks undervalued. These are 37 per cent cheaper in terms of price to earnings (PE) multiples as compared to the overall portfolio of 239 companies (PE 26). On the fundamental side, the portfolio's return on equity, or  RoE, is nearly double than that of the market portfolio (12 per cent). The dividend yield is also 50 per cent higher. Their balance sheets are also cash rich (nearly 15 per cent equity is available in cash). The asset turnover ratio (the ratio of revenues relative to the value of assets) is also high at nearly 95 per cent," says Gupta. "If investors have the patience to hold on to these stocks and avoid the temporary noise surrounding them, they are likely to see value unlocking between six and 36 months," says Gupta.

Recommendation: Buy
The sector has been beaten down due to concerns over growth. However, these companies are cash rich. They have also invested in new technologies such as digital, mobile and artificial intelligence. So far, these businesses account for a small portion of the revenue. However, the new technology business is growing at 25 per cent per year. In three-five years, it will be a significant earner and contribute 40-80 per cent to revenues, from 10-20 per cent levels at present. Second, these tech companies are available cheap, have no leverage and are sitting on huge cash.

Health Care
Recommendation: Buy
The recent stringent USFDA inspections have led to pessimism about pharmaceutical stocks. The only option for these companies is to get their act together if they want to remain in business. Most are already working to raise quality to global levels to survive in their biggest market, the US. Second, the US administration is batting for low-priced drugs, making Indian pharmaceutical companies, a big producer of the cheaper generic drugs, a prime beneficiary. At current valuations, they are a good buy.

Basic Materials
Recommendation: Be Selective or Stay Away
Buy if the companies have zero leverage and are profitable and cash rich. Otherwise, it's a sell.

Financials
Recommendation: Be Selective or Stay Away
Be careful in picking stocks. Buy only government-owned NBFCs whose operations are solid and which are not facing the problem of high non-performing assets or NPAs. Business will get a boost with government initiatives for rural power and electrification. Stay away from PSU banks as they are struggling with high NPAs that will not come down any time soon. Stay away from private banks due to  overvaluation.

Consumer Services, Telecom, Utilities & Industrials
Recommendation: Sell
Nothing worthwhile here. The companies in industrials and utilities are highly leveraged. Companies in consumer services are fairly or overvalued, while those in telecom are struggling operationally.

Oil & Gas
Recommendation: Hold/No fresh buys
Only consider government-backed PSU which are cash rich. No fresh buys at current valuation. Hold if these are already a part of the portfolio.

Consumer Goods
Recommendation: Be selective or stay away
Buy only two-wheeler and auto ancillary companies. Stay away from commercial vehicle, four wheeler and tractor makers as they are fairly valued or overvalued. Even in the two-wheeler segment, buy zero leverage companies that are undervalued. Do not buy any stock in the space that is available at a PE of more than 30 times. 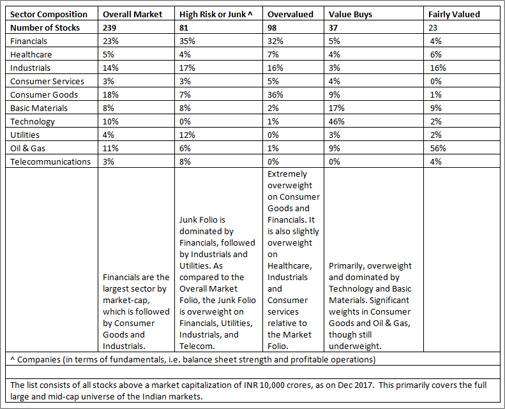