Adani Group stocks ended mixed even after the clarification from National Securities Depository Ltd that the accounts of three foreign funds are 'active' and not frozen. 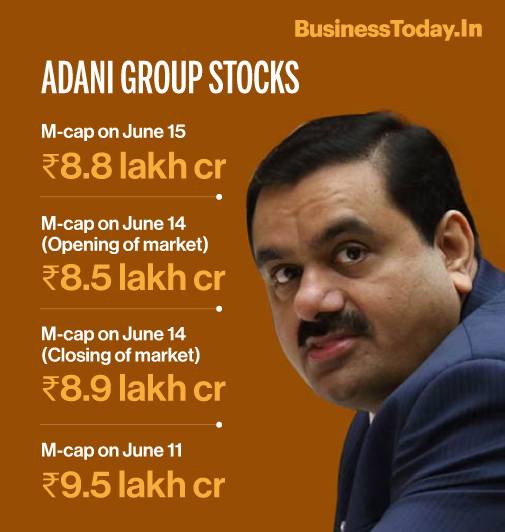 On Friday, the total market capitalisation of Adani Group was Rs 9.5 lakh crore. It fell more than 10 per cent or nearly Rs 1.03 lakh crore in the morning session on Monday.

Shares of Adani Enterprises and Adani Green Energy ended in the green today on BSE. However, the shares of Adani Power, Adani Total Gas, and Adani Transmission were locked in their respective 5 per cent lower circuits on BSE.

AR Ramachandran, Co-founder & Trainer at Tips2Trades said, "The Adani Group stocks were long due for a correction with strong support now at Rs 1,200 for Adani Enterprises. A daily close above Rs 1,450 could stem the current fall. Investors are advised to stay on the sidelines till either level has been breached."

Adani ports also shed all early gains soon after the opening and ended in the red. Citi has maintained a 'Buy' rating on the stock with a target price of Rs 1,000 per share. The brokerage house believes that the current valuation is attractive.

"Adani Ports in the short term is forming wave 4, which means that the short to medium-term trend is negative. It has corrected sharply in today's trading session. So, in the short term Rs 675 and in the medium term Rs 590 - these are the two supports. In this dip, it should be utilised as a buying opportunity since once this correction is over wave 5 up will take it back to newer highs," Jay Thakkar, VP and Head of Equity Research, Marwadi Shares and Finance Limited, told Business Today.

Adani Group stocks crashed on Monday following reports that the National Securities Depository Ltd (NSDL) has frozen the accounts of three foreign funds that together own shares worth Rs 43,500 crore in four Adani Group companies.

The stocks of Adani Group pared some losses after the clarification from NSDL but are still in wait-and-watch mode.

"The accounts of three foreign funds that are among the biggest backers of the Adani group are "active" and not frozen," said Rakesh Mehta, Vice President, National Securities Depository Ltd.

The central securities depository's response came after the Adani group shot an email to the NSDL, asking the status of three foreign funds.

"The freeze is on accounts of the funds that hold certain other securities and is not new," it said.

"We request you to please confirm whether the aforesaid Demat accounts are frozen by NDSL or not?" the Adani group letter stated.

The Economic Times had earlier reported the NSDL had frozen the accounts of three foreign funds due to insufficient disclosure on beneficial ownership.

Later, the Adani Group termed the report as "blatantly erroneous" and that it was "done to deliberately mislead the investing community".