Impacted by the dull market and uncertain investment climate, 22 firms have called off their initial public offerings targeted to raise an aggregate Rs 8,392 crore this year despite approval.

The weakening investor sentiment has been a big obstacle in launching of IPOs.
Impacted by the dull market and uncertain investment climate, 22 firms have called off their initial public offerings (IPOs) targeted to raise an aggregate Rs 8,392 crore this year despite approval. The companies failed to launch their IPOs within the validity period. "All these companies had Sebi (Securities and Exchange Board of India ) approval for their IPOs. 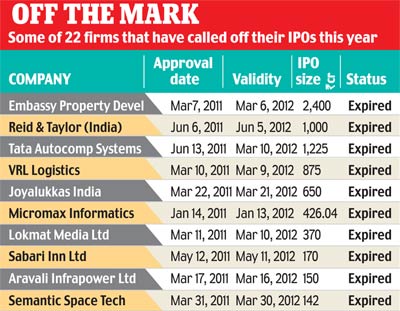 Other prominent names in the list are engineering, procurement and construction firm Aravali Infrapower, IT solutions and services firm Semantic Space Technologies and Pride Hotels Ltd.

In comparison, 29 companies which were planning to raise about Rs 32,400 crore through their initial stake sales had cancelled their IPOs last year. Besides, since January 1, 2011, four firms-Samvardhana Motherson Finance, Goodwill Hospital, Plastene India and Galaxy Surfacants- had withdrawn their IPOs citing investor responses.

"Further, the government's disinvestment programme, which was supposed to bring public issues of many blue-chip PSUs, did not take off. This surely will impact corporates' ability to raise funds needed to finance expansion of projects and result in slowdown in capacity building and job creation," Thunuguntla added.

After the first two months, inflows by foreign institutional investors were chocked due to a bad market and the government's uncertain political conditions - though total inflows tripled more than to Rs 62,854.6 crore in the first six months of the year. However, inflows began to wane from March especially after the Budget announcement on General Anti-Avoidance Rules and taxation with retrospective effect.

"The primary market itself was subdued and the volumes were low not to mention the state of the secondary market. The growth was impacted by poor GDP, high inflation and investor sentiments were not right for IPOs," Alex Mathews, head (research), Geojit BNP Paribas Financial Services, said. "However, with the primary market improving, the IPO market is also slated to improve," he added.

On Wednesday, the Indian Farmers Fertiliser Cooperative Ltd (Iffco) postponed the Rs 600-crore IPO of its Chhattisgarh power plan. "It will take another one year to launch an IPO," U.S. Awasthi, managing director, Iffco, said on the sidelines of a meeting on cooperatives in New Delhi. The proposed IPO was to be opened in the last fiscal. It has, however, been delayed as its power subsidiary Iffco Chhattisgarh Power Ltd (ICPL) got environment nod in May, he said.

ICPL, which is a joint venture between Iffco and Chhattisgarh State Electricity Board (CSEB), plans to raise Rs 600 crore from the capital market to fund its power project, he added.