Equity market ended higher for the second straight session on Tuesday, led by gains in consumer durables and pharma shares. Sensex rose 350 points to end at 57,943 and Nifty gained 103 points to 17,325. HDFC, Bharti Airtel, UltraTech Cement, Sun Pharma and HDFC Bank were the top Sensex gainers, rising up to 3.06%. Of 30 Sensex stocks, 20 ended in the green.

What's next? Here are the latest updates!

Market breadth is positive with 2216 shares trading higher against 1115 stocks falling on BSE. 125 shares are unchanged.

Overall venture capital (VC) fund exits in Indian start-ups surged over 10 times to cross $14 billion in 2021 in comparison to the previous year, according to a report by Bain & Company.

Anchored by a few marquee deals, the exits accounted for around 60 per cent of the total exit value. This included BillDesk's acquisition by PayU for $4.7 billion, Paytm's $2.5 billion initial public offering (IPO), and Zomato's IPO debut of $1.3 billion.

VC exits through IPOs constituted a robust 40 per cent of the overall exit value in 2021, while secondary sales were anchored by a few large deals, as per the report.READ MORE

1:45 pm: Stocks to buy: Analysts suggest these 12 stocks for next financial year

Domestic equity market may continue to deliver a double-digit return to investors in the next financial year – this is the prediction made by select analysts on Dalal Street. The benchmark BSE Sensex has gained over 17 per cent so far in 2021-22 despite a couple of headwinds in the form of rising crude oil prices, heavy selling by foreign institutional investors, ongoing conflict between Russia and Ukraine, among others. On the other hand, broader indices BSE Midcap and BSE Smallcap have gained 18 per cent and 35 per cent, respectively, since April 1 last year. READ MORE

Shares of Ruchi Soya rose for the second straight session today despite the company filing an FIR in Haridwar to investigate the source of SMSs advising investors to participate in its follow on public offer (FPO).

The development came after the market regulator Sebi, on March 28, asked the Baba Ramdev-led firm to provide an option to all investors (except anchor investors) in its follow-on public offer (FPO) to withdraw their bids due to "circulation of unsolicited SMSs advertising the issue".

The regulator said that prima-facie, the contents appear to be "misleading/ fraudulent" and not in consonance with SEBI (ICDR) Regulations, 2018. The window for withdrawal shall be available on March 28, 29 and 30.

IDBI Bank stock rose over 3% today after the lender approved the divestment of its stake in two entities – National Securities Depository Limited (NSDL) and Ageas Federal Life Insurance Company Limited (AFLI) in its recent meeting, as per exchange filings. The stock touched an intraday high of Rs 44.2, rising 3.15% on BSE. It has gained after three days of consecutive fall.

Future Enterprises share was trading 10% higher today despite the Future Group firm stating that it has defaulted on payment of Rs 19.16 crore to Punjab National Bank, Canara Bank and Union Bank of India under the one-time restructuring plan. This is the second default by FEL this month. The due date for payment of Rs 19.16 crore was March 28, FEL said in a regulatory filing. "The company was not able to discharge the aforesaid obligations to respective banks/lenders, on due date," it said.

Shares of Hero MotoCorp rose 3% in early trade today after the two-wheeler major denied media reports which said that the Income Tax Department (I-T Department) was analysing Rs 1,000 crore of bogus expenses at the firm. Hero MotoCorp stock gained 3.1% to Rs 2277 against the previous close of Rs 2208.35 on BSE. The large cap stock has gained after three days of consecutive fall.READ MORE 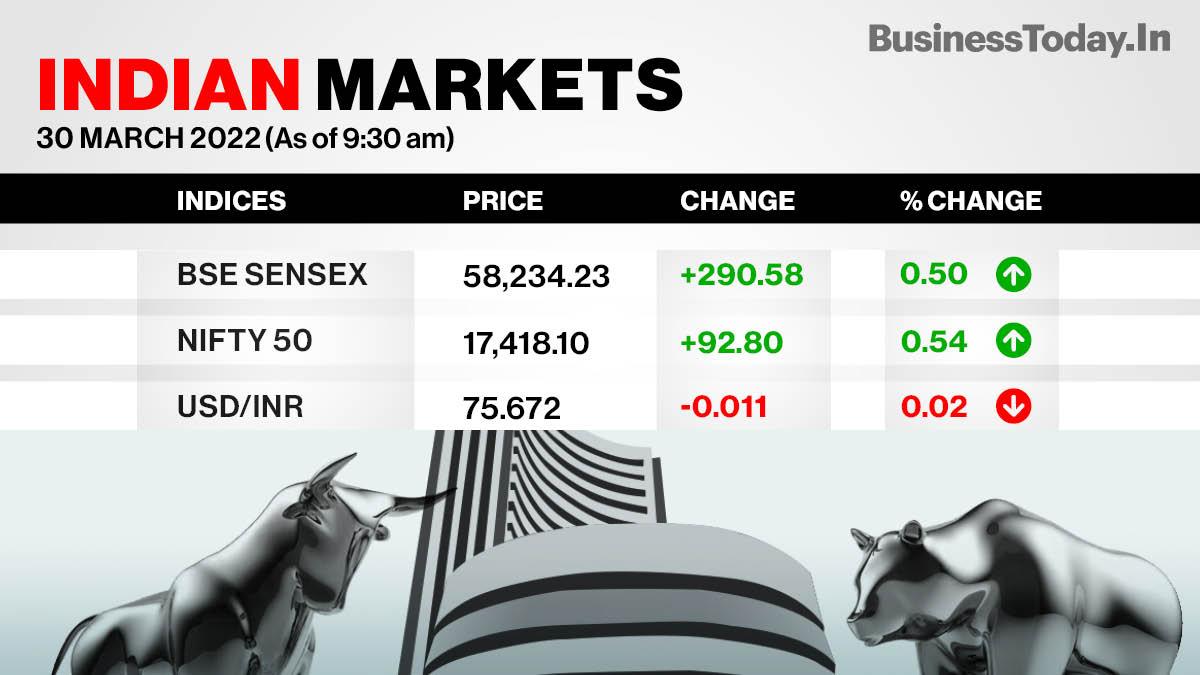 Prashanth Tapse, Vice President (Research), Mehta Equities said, "Nifty mostly will aim to strengthen higher on backdrop of recent fall in oil prices as investors will continue to monitor developments in the Russia-Ukraine war and consider tighter monetary policy from the Federal Reserve in the year ahead. Technically, positive bias as long as Nifty holds above its 200 DMA at 17053 mark. Nifty bears will look to sharpen their claws only below the 17053 mark." 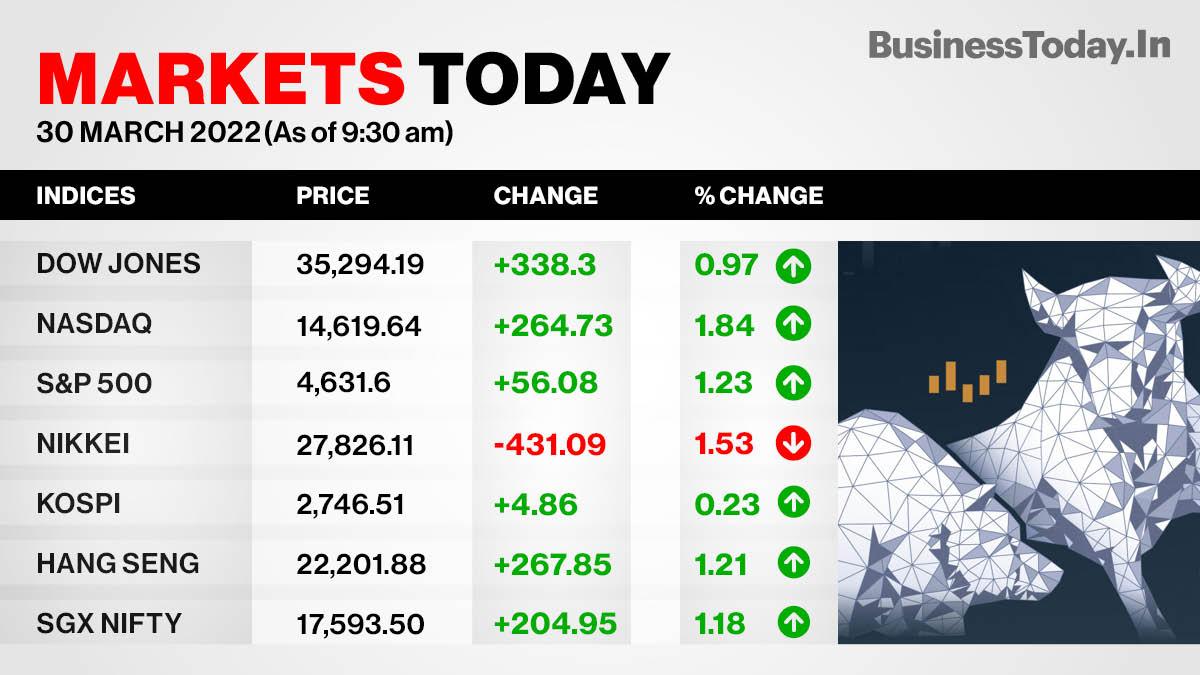 The Indian equity market is likely to open in the green today as SGX Nifty was trading 149 points higher at 17,527. The Singapore Stock Exchange is considered to be the first indication of the opening of the Indian market.

Indian equity market ended higher for the second straight session, led by gains in consumer durables and pharma shares. Sensex rose 350 points to end at 57,943 and Nifty gained 103 points to 17,325. HDFC, Bharti Airtel, UltraTech Cement, Sun Pharma and HDFC Bank were the top Sensex gainers, rising up to 3.06%. Of 30 Sensex stocks, 20 ended in the red.

ITC, IndusInd Bank, Maruti and SBI were the top Sensex losers, falling up to 0.99%. Of 30 Sensex stocks, 20 ended in the green.