MindRush 2016: Solve the problems of people and they will reward you with success, says Acharya Balkrishna

Balkrishna said people today look up to Patanjali when it comes to swadeshi and nationalism. When asked why they manufacture noodles and jeans if it's so much about swadeshi, he said that their effort is to change these products to suit Indian sensibilities. 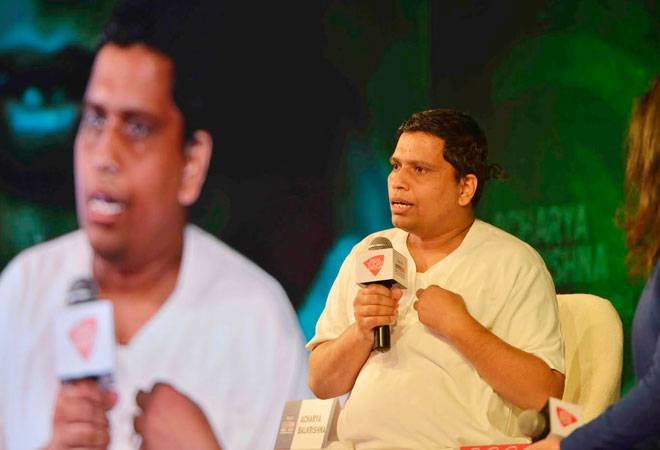 While yoga guru Baba Ramdev is the face of Patanjali Ayurved, Acharya Balkrishna has been the silent force behind the home-grown tooth paste-to-noodles company.

However, Balkrishna cannot be mistaken for a reticent and reluctant man-of-action. At BT MindRush, he had the answers to all the tough questions thrown at him.

Without the trappings of a business magnet or a management guru, Balkrishna was able to convincingly explain the thinking behind Patanjali. "Our business mantra is: solve the problems of people, and they will reward you with success," says Balkrishna.

He admits that Patanjali did not happen because of meticulous planning; it happened because yoga guru Ramdev wanted to help a bunch of farmers.

Narrating the story of how Baba Ramdev promised some farmers from Uttarakhand that he will buy amla from them to prevent them from cutting the trees of the fruit. They didn't know what to do with the truck-load amla he bought from farmers but  discovered there was a government mill in Punjab which can extract its juice. But extracting juice alone was not going to solve the problem at hand. So they started packing and selling the juice at their ashrams.

"Without doing any market study or consumer survey, we set out to extract amla juice and selling it. Thankfully people liked it, and that was how the foundation of Patanjali was laid," said Balkrishna.

However, as they kept growing and started expanding, they needed both marketing and management skills which he said they are gradually acquiring through the right recruitments. So, the days are not far behind when Patanjali might also recruit from top educational institutes like IITs and IIMs.

Balkrishna said people today look up to Patanjali when it comes to swadeshi and nationalism. When asked why they manufacture noodles and jeans if it's so much about swadeshi, he said that their effort is to change these products to suit Indian sensibilities.  "Noodles are not very different from vermicelli, which Indians already consume. What we have changed in noodles is that they are made of atta and not maida and they are not prepared in harmful oils," said Balkrishna.

However, he admitted India cannot shun technological know-how  developed by foreign countries but added it should be for improving the country's capabilities. The ultimate goal of "Make in India" should be "Made in India".

On the recent questions raised about the quality of Patanjali products, Balkrishna said that they manufacture in-house to rule out any such issues. "There could have been some issues with products outsourced to third parties. We are trying to minimise the errors to less than 1 per cent," he assured the audience.