Emboldened, firms indulge in a game of one-upmanship based on alarmingly low number of trials. Sputnik had been tried on only 20 patients before Gamaleya made the claim; Pfizer 120 and Moderna 95

It all began with Pfizer-BioNTech's claim on 9 November that its Covid vaccine in development had reported 90 pc efficacy. Not to be left behind, 2 days later, on 11 November, Russia's Gamaleya Institute said its vaccine Sputnik V was one step better-92 per cent. Moderna, the third firm up ahead in race to the finishing line didn't take kindly to the two claims. It reported 94.5 per cent efficacy for its vaccine mRNA-1273 on 16 November.

Pfizer chairman & CEO Albert Bourla first took to Twitter with bonhomie, expressing solidarity with Moderna. "I am thrilled to hear the good news coming out of @moderna_tx's #COVID19 vaccine development program. Our companies share a common goal - defeating this dreaded disease - and today we congratulate everyone at Moderna and share in the joy of their encouraging results," Bourla said. 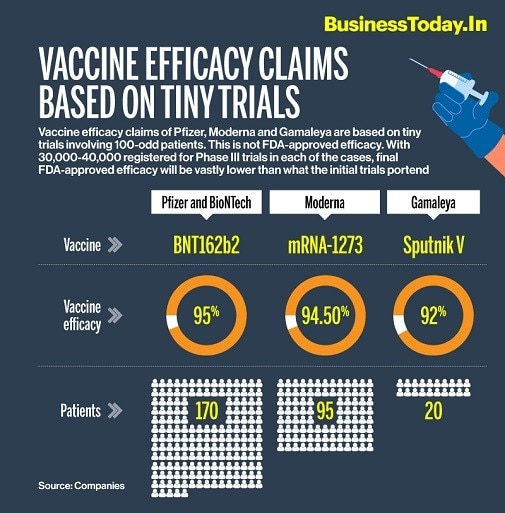 But Bourla's competitive streak was unveiled a day later as he carried an ace up his sleeve. On 18 November, Pfizer declared "final efficacy analysis" for its vaccine BNT162b2 showed 95 pc efficacy-not 90 pc as reported earlier. Right through this phase, though, the world's toughest drug regulators - dreaded by pharma companies for zero tolerance and harshest crackdowns - remained mute witness to vaccine developers' bombastic claims. Particularly, since efficacy can only be certified by regulators such as US FDA, UK's MHRA or India's Central Drugs Standard Control Organisation (CDSCO). Their choice not to come crashing down on the vaccine developers for the claims remains a mystery.

Meanwhile, vaccine firm's valuations sky-rocketed and the world's stock markets went into a tizzy. But sleepy drug regulators turned a blind eye to claims of "My vaccine is better than yours" that has enormous consequences not just for people's faith in the vaccines but also on gullible investors' money who may fall prey to the stupendous jump in stocks of the companies in question.

Since May, when Moderna announced its vaccine, its stock has risen nearly 50 per cent. Pfizer CEO Bourla even sold $5.6 million worth of stock - 62 per cent of his holding - on the day of the 90 per cent efficacy announcement when stock jumped 15 per cent. Even though the company clarified the sale was automated under a plan set up as far back as August. But global stock market had already hit a record high on the day of the announcement.

These stock prices may or may not sustain as competing vaccines hit the market, or when final efficacy certificates are handed out by the regulators.

Emboldened, the firms continue to indulge in a game of one-upmanship based on alarmingly low numbers of trials. Sputnik had been tried on only 20 patients before Gamaleya made the claim; Pfizer 94 and Moderna 95. Pfizer's 'final efficacy analysis' involved only 120 patients. For their Phase III trials, these firms have registered 40,000 (Gamaleya), 43,538 (Pfizer) and 30,000 (Moderna) volunteers. But the cutthroat race and one-upmanship prompted the rush with unbridled claims.

If these vaccines do get certified by the regulators with such high efficacy (though that's extremely unlikely once all of them have gone through at least 30,000 volunteers in Phase III) it will be rarest of rare in the history of drug and vaccine development. Most vaccines get certified in the 40-60 per cent efficacy band. Even a 70 pc efficacy is considered excellent in the world of vaccines. The world's most powerful vaccine -- Measles -- has nearly 60 years of science and millions of vaccinations backing it to be called 94-95 pc efficacious. Such high level of efficacy is unlikely to be certified by regulators in brand new vaccines.

But by the time the efficacy is certified for mass use, much of the damage may have already been done.