Extinction Rebellion- Its not climate change, its climate emergency

Ordinary people will have to come on the streets to ensure that their governments actually do so. Thanks to  Extinction Rebellion (XR) movement, England, Ireland, Wales and 558 councils covering 65 million people in 13 countries have declared a climate emergency. 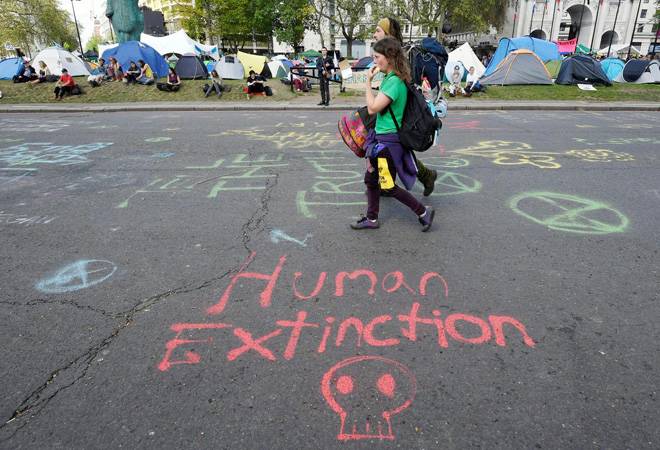 Calling themselves the 'Extinction Rebellion or XR for short', hundreds of non-violent protesters offered to get arrested last month in London, UK as part of the civil disobedience straight out of Gandhi's playbook that made the British quit India.

Hyde Park, Oxford Circus, Parliament Square, Piccadilly, the Stock Exchange were among many of the world famous landmarks in London that were taken over by an unusual group of protesters last month. Calling themselves the 'Extinction Rebellion or XR for short', hundreds of non-violent protesters offered to get arrested as part of the civil disobedience straight out of Gandhi's playbook that made the British quit India.

Within a matter of days, London police was at its wit's end and UK's parliamentarians got together to agree to one of the three key demands of the movement - 'to declare a climate emergency'. It was a stunning success which injected fresh life into tired environmental advocacy and action groups all over the world. Extinction rebellion groups have since sprouted spontaneously all over the world bringing hundreds on to the street.

When I first heard about the successful London protests, I searched the internet and found Olivier and Harriet who had just set up a twitter account for XR Hong Kong. In the first training session, we connected over a live video link with the kind and affectionate Heather from the UK then based in Germany. She took us through the background and key principles of the movement with a few slides sprinkled with her personal experiences in the protests.

The whole thing was all of six months old. What struck me immediately was that the movement was deeply inspired by none other than Gandhi. The same 'half-naked fakir' who we in India are happy discarding and denigrating at the slightest opportunity thanks to the rise of the Hindutva brigade. The DNA of XR is deeply embedded in and imbued with Gandhian values and principles.

Non-violence is at its core. Inner transformation, community uplift and political action are the intersecting circles that surround that core. Sitting with a group of seven to eight founding members of XR Hong Kong as I went through the training, I had a feeling that Gandhi had come alive again. He had come to inspire just like he did earlier the Civil Rights Movement led by Dr Martin Luther King Jr and anti-Apartheid struggle of Nelson Mandela.

Faced with an existential crisis that is likely to be worse than what's being predicted by the vast majority of climate science researchers, XR along with the school strike led by Greta Thunberg seems to be the last hope for humanity. Paris climate agreement called for substantial cuts in greenhouse gas emissions to limit global average temperature rise to below 2 degree Celsius compared to pre-industrial levels.

Also Read:Adani gets final nod to start construction of controversial coal mine in Australia

It also called for every effort to be made to keep temperature rise below 1.5 degree Celsius. This had made countries like the UK to declare a target of cutting emissions by 80% to below 1990 levels by 2050 and legislate the same into law. However, the latest advice from the inter-governmental panel on climate change (IPCC) seems to suggest that unless drastic remedial action is taken by 2030, the world may have reached a point of no return.

This is because of a number of tipping points, such as the melting of the permafrost releasing methane that would accelerate the climate crisis with unpredictable consequences. The levels of greenhouse gases in the earth's atmosphere are already at a level not seen in the last several million years. The last time such an atmosphere existed, there was forest growing in the polar regions and sea levels were several meters higher.

The need to act and act now

XR's operating principles include 10 ideas that reflect the strong commitment to the preservation of planet Earth with its natural ecosystem. It reflects a deep sense of love for all living beings and nature. It emphasises a shared vision, a regenerative culture, a challenging approach to one's self and beliefs, inclusiveness, equality, non-discrimination and decentralised self-actuation.

In a way, it mirrors the 11 principles of Gandhi that were essential for one to become a Satyagrahi or an activist of non-violent civil disobedience. Naturally, the first of the three demands XR makes is for governments to declare a climate emergency by 'telling the truth' about what climate scientists are saying.

This is particularly important given the massive campaign against the scientifically established fact that global heating and climate crisis result directly from anthropogenic sources. The second demand is for governments to enact policies and laws to achieve carbon neutrality by 2025. The third but a critically important goal is the establishment of a people's assembly to direct the actions to achieve the goals by 2025.

The people's assembly selected based on the sortition principle is a unique concept in which, as a jury, ordinary people are selected by lottery to represent the population and act on their behalf guided by expert advice. This method has proven to work well all over the world in many different contexts, to address a variety of complex problems at an organisational or a community level.

With democracies world over showing tendencies of dysfunction in electing right-wing populists such as Trump and Modi, sortition is believed by many to be the next improved version of democratic governance most suited for an equitable future for mankind.

It is becoming increasingly clear that the world is fast hurtling towards imminent self-destruction. The only hope of avoiding such a catastrophe is to re-examine the structural arrangements of modern life and transform it drastically to a low-carbon lifestyle at the earliest possible time.

The market-driven open-ended economic growth model and profit-driven corporate culture have to change radically. Instead of financial bottom lines, corporations have to look at their emission budgets. Individuals will have to live a life with rewards and incentives built into our every choice to encourage low-carbon lifestyle.

Governments have to drive these changes proactively with progressive legislation. Ordinary people will have to come on the streets to ensure that their governments actually do so. Thanks to XR, England, Ireland, Wales and 558 councils covering 65 million people in 13 countries have declared a climate emergency.

A court in the Netherlands has ruled in favour of climate activists directing the Dutch government to increase its target to cut emissions by 17 to 25% by 2020. Such verdict has encouraged activists in many countries to bring similar lawsuits to get their governments to act.

People of developing countries such as India are paying a disproportionately high price for the consumerism of the developed world - particularly over the last few decades. In a fairer world, destruction witnessed in the recent cyclone Fani which affected mostly those who can resist the least would have been compensated for by carbon tax on the rich.

But until the people at the bottom of the pyramid realise the climate injustice that is going to increasingly wreak havoc on them while the rich get away, the movements such as XR are not going to succeed. It is the people in the developing world who need to join and indeed lead such rebellion not only to force their own governments to avoid the mistakes of the developed world but demand that rich countries change at the earliest.

Greta Thunberg said, "I'm sure that the moment we start behaving as if we were in an emergency, we can avoid climate and ecological catastrophe. Humans are very adaptable: we can still fix this. But the opportunity to do so will not last for long. We must start today. We have no more excuses." XR has now created a platform to achieve just that.

(The author is a civil engineering professor in India currently visiting Hong Kong University of Science and Technology as a Research Scholar. He is a founder-member of XR Hong Kong)