The decline in gross NPAs from 11% to 9% during 2018-19, and higher recovery through IBC in visibly large cases, made almost everybody believe the worst was over Haircuts in respect of liquidation cases are huge, and hopefully a major part of these legacy cases would have already been written off

The country is going through an unprecedented countrywide three-week lockdown starting from March 25, 2020. Prior to that too, several state governments had shut down offices and business establishments, based on the severity of coronavirus (COVID-19) pandemic.

In a regulatory forbearance announced subsequently by RBI, there is a moratorium on the payment due for a 3-month period starting March 1, 2020. In practical terms, this year the non-performing asset (NPA) accretion will be for 11 months, as March installment/interest payment due but not paid will not add up to the NPAs.

The present exercise is to assess the estimated position of the NPAs of the banking system as of the year ending March 31, 2020.

The decline in gross NPAs from 11% to 9% during 2018-19, and higher recovery through IBC in visibly large cases, made almost everybody believe the worst was over. But as this analysis shows, recent developments in the ecosystem are likely to generate more NPAs once again.

First, a look at the historical data for the last three years: 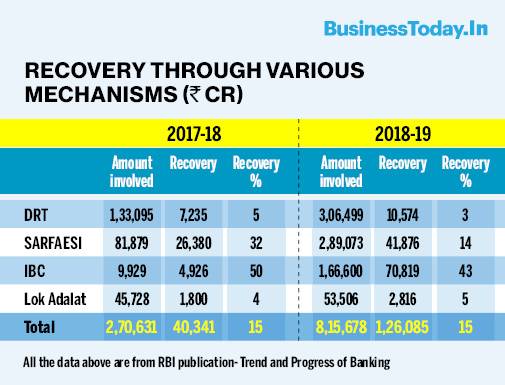 Now let us try to reconstruct each component to find out the estimated level of gross NPAs likely as of March 31, 2020.

In all these years, the opening level of NPA as at the beginning of each year is different from the closing NPA as of the previous year. This is due to rectification made by banks after reporting the data to RBI. The closing NPA reported as of March 31, 2019 was Rs 9,36,474 crore. After adding up factors like divergence in reporting as announced by various banks subsequently after supervisory review, the opening NPA for the current year is taken as Rs 9,50,000 crore

2. Fresh additions during the year

Part of the loan book will be turned into NPA, for various factors and it is natural. The rate for 2018 was 7% and for 2019, it was 3% (new NPAs/ outstanding credit as at close of last year). The huge jump in 2018 may have been driven more by NPA disclosures on asset quality reviews (AQR) undertaken by the regulators and application of asset classification norms stringently, rather than due to significant deterioration in the credit quality.

However, during the current year (2019-20), macroeconomics manifested signs of a slowdown. GDP growth started declining each successive quarter. Credit started to record unprecedented sluggish growth. New fault-lines started emerging in new sectors in a big way, like NBFCs, HFCs. There is a severe strain on the credit quality of sectors like MSMEs and industry in general, telecom, aviation, NBFCs, etc.

As mentioned earlier, at present, there is a moratorium on the March 2020 installment/interest. I have taken the outstanding loan book of the banking system as on February 28, released recently by RBI on March 31st. I have assigned a risk factor for the sector based on its vulnerability in the current economic scenario and tried to have an estimated level of NPA accretion. Based on recent historical trends, I have assumed fresh NPA accretion in a range of 3-7% of the outstanding loan book. Admittedly, this methodology has its limitations. But in the absence of sector-wise, account wise default details, this is supposed to broadly indicate a macro picture. 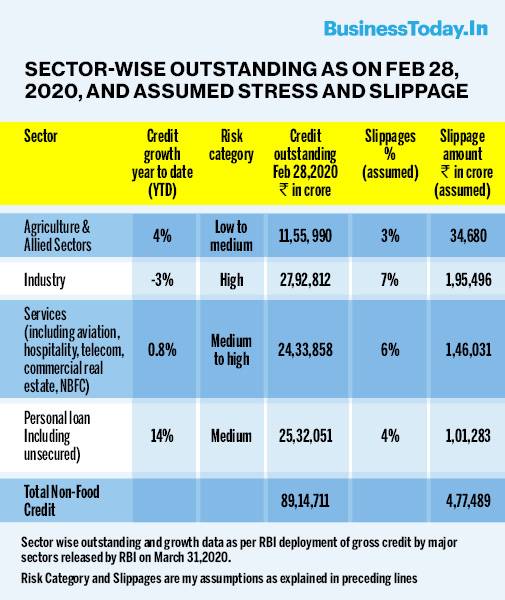 3. Reduction during the year

Reduction in NPA can be due to various factors like upgradation of the asset from NPA to standard, after recovery of defaulted irregularity through in-house recovery efforts like settlement or by legal measures like security enforcement actions under SARFAESI, debt recovery tribunal, Lok Adalat and finally through IBC.

A. In the last 2 years, recovery through all other legal measures (excluding IBC) has been Rs 35,000 crore and Rs 55,000 crore as given in the table above. As many cases have now been referred to the IBC, and hence the action under SARFEASI/DRT is stayed, I expect a muted recovery through these channels and I have assumed it at Rs 30,000 crore.

B. Under IBC, as per IBBI newsletter of December 19 read with March 19, the incremental amount payable to lenders under the newly approved resolution plans during this year is Rs 77,167 crore. Since in many cases of resolution plans, the money is received after a lag of around a few months and in a staggered manner, I have taken 75% credit to account during the year thereof amounting Rs 57,875 crore and this year there was a receipt of money in respect of one account, Essar Steel resolved in the earlier year amounting to Rs 39,000 crore. Overall, I have assumed a recovery of Rs 1,10,000 crore including all other cases and in the last quarter of the financial year from IBC proceedings.

C. The recovery under in house resolution in the last 2 years was Rs 93,000 crore and Rs 1,24,000 respectively. As of now, most of the cases have been referred to IBC and other legal processes, the scope of in-house resolution has been reduced. For big cases above Rs 2,000 crore exposure, a separate resolution framework has been put in place during the year on June 19, mandating signing up an inter-creditor agreement (ICA) among the creditors for driving resolution outside the IBC purview. The progress under ICA till December 2019 was extremely slow as reported in the Financial Stability Report of RBI. Based on this, RBI's sample study where only one case was resolved with exposure of Rs 1,617 crore from a sample of Rs 96,075 crore in respect of 13 banks covered under the study, I estimate a substantial slowdown in in-house resolution as:-

(1) Many cases have already been referred to IBC and another legal forum, and the amount left for banks to resolve themselves, has reduced considerably.

The detailed composition of the write-off is not available. However, we can estimate it based on a few factors. In terms of RBI's Fiscal Stability Report, in the first half of the year, 4,413 cases were reported with the amount involved as Rs 1,13,000 crore as against an amount of Rs 71,000 crore for the full year last year. Even if assuming 40% was already provided for like in the 'Doubtful 3' category of NPA, but not categorised as fraud, the rest 60% would need to be provided, which is, Rs 67,800 crore. In the absence of detailed credit loss data, and provisioning made thereof, it is difficult to compute the amount of write-off. However, given the historical average of around 57% haircut in resolved cases under IBC, for a recovery estimated at Rs 1,10,000 crore, the consequent haircut is estimated at Rs 1,45,800 crore.

Haircuts in respect of liquidation cases are huge, and hopefully a major part of these legacy cases would have already been written off. While comparable data was not available, as on December 19 (2019), the total liquidation claims were Rs 4,57,579 against which the amount of liquidation value was reported at Rs 21,147, with a total cumulative haircut of Rs 4,36,432. For the current year, a fraction of that, say 50% may be applicable with 80% of that haircut already having been written off earlier. This would require a write-off of Rs 43,643 crore.

Based on some empirical data as above, a fair assessment of write-off including a few small ones would revolve around Rs 2,60,000 crore.

There is a huge difference between sector-wise fortnightly credit deployment data and annual advances data, used for computing the NPA percentage. Some advances considered bad and doubtful for full recovery are segregated by banks to separate the accounts, in respect of which the regular sectoral reporting is not done.

From sector-wise latest data released by the RBI up to February 2020, there is a 3.5% growth in advances. With this the growth rate computed above assessed the gross advances last year, the level of advances as at year-end is estimated at Rs 106.51 lakh crore.

So, the NPA level and its percentage are assessed as under. For a meaningful comparison, the last two year's actual data is placed alongside. 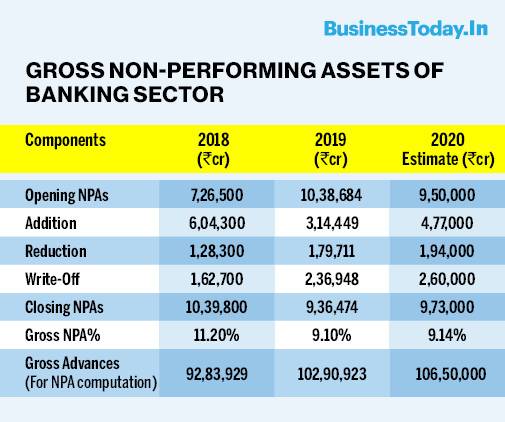 (The author is an ex-banker. Views are personal)

Coronavirus lockdown: What are the implications for Indian employers