Neither the Wage Code 2019 nor the draft Rules 2020 notified in July 2020 under it links wage to labour productivity, strengthen implementation regime, make minimum wage universal or limit working hours to 8-hour a day to improve the lot of workers Neither the Wage Code Bill, 2019 nor the draft Rules 2020 link minimum wage to labour productivity, meaning workers would continue to be denied their fair share

There is an age-old idiom: the proof of the pudding is in the eating.

The new Wage Code Bill, 2019 was notified on August 8, 2019, promising equity and welfare of workers through universal minimum wage on the one hand and ease of doing business to help setting up more enterprises, thereby creating more employment on the other.

More than a year down the line, there is no sign of a national minimum wage or a national floor-wage to provide a minimum standard of living to workers.

The national minimum wage continues to be Rs 176 per day fixed in 2017. It was raised to Rs 178 - a raise by Rs 2 - days before the Wage Code Bill 2019 was passed while an internal committee of the labour ministry had proposed Rs 375 per day a few months earlier. This raise by Rs 2 was never even notified.

There are plenty of apparent flaws in the way the Wage Code Bill, 2019 and the draft Code on Wages (Central) Rules of July 7, 2020 framed under it have been designed.

In August 2018, the International Labour Organisation (ILO) published "India Wage Report" drawing attention to the flaw in the wage structure of India.

It said the "average labour productivity", as measured by GDP per worker, increased more rapidly than "real average wages" in the post-liberalisation era. "According to one estimate", it said, "the labour share declined from 38.5 per cent in 1981 to 35.4 per cent in 2013".

This decline is captured in the following graph. 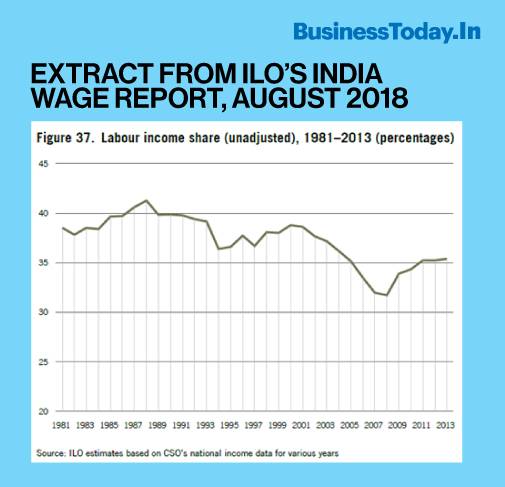 The ILO report helpfully explained that the implication of faster pace of profit, rent and other income from capital vis-a-vis compensation towards labour is that "income is concentrated in richer households, which in turn increases inequality among individuals".

Neither the Wage Code Bill, 2019 nor the draft Rules 2020 link minimum wage to labour productivity, meaning workers would continue to be denied their fair share.

It is not as if minimum wages did not exist in India before 2019, howsoever limited in scope. The problem was in its implementation as the Economic Survey of 2018-2019 highlighted.

It showed a large number of workers -19.4% of regular workers and 42% of casual workers - received below the National Floor-Level Minimum Wage (NFLMW) in 2012 and emphasised on establishing a well-designed and effective implementation mechanism to decrease wage inequality, especially at lower levels.

What does the Wage Code Bill, 2019 and the Rules 2020 provide which will improve implementation and deter violations?

The Wage Code 2019 sets maximum penalty for not paying minimum wage at Rs 50,000 and for a repeat offender Rs 1 lakh and/or three months of imprisonment. But there is no minimum penalty, which means a penalty of any amount - Rs 10 or even Rs 1 - can be imposed and is thus discretionary.

The Parliamentary Standing Committee, which examined the Wage Code (the Wage Code of 2017 introduced earlier) and submitted its recommendation in December 2018, said that in the current context this provision "is not substantial enough to act as a deterrent". Hence, it proposed to raise maximum penalty to Rs 10 lakh. This was ignored.

What is the mechanism to detect violations?

The authority directly dealing with violations has been turned into "inspector-cum-facilitator" from "inspector" earlier, who would generate "web-based inspection" and call for information "electronically" (Section 51(2) of the code). The responsibilities of this authority have been expanded to include supply information and advice to both employers and workers to enable effective compliance.

Then the draft Rules 2020 says the Chief Labour Commissioner (Central) shall formulate an "inspection scheme" with the approval of the central government.

The Parliamentary panel did object to the changing of "inspector" into "facilitator" pointing at its negative connotations and sought to retain "inspector" "in accordance with the ILO norms", which was ignored.

The Wage Code Bill, 2019 is not universal, contrary to the central government's claims.

Section 50 of the Wage Code Bill, 2019 excludes establishments with 5 or less workers engaged for "agriculture and domestic purpose" from maintaining "register" or "wage clip".

The number of workers in these establishments would run into many more millions.

Add to it workers working for "domestic purpose". And also add gig workers, platform workers and home-based workers since the definition of "worker" in the code does not include them. (They are included in the Code for Social Security 2020.).

Then there are the MGNREGA workers who are specifically excluded in Section 66. They numbered 76.7 million to 85.2 million in the past five years, including FY21, as per the official website.

A large number of Anganwadi workers and helpers, ASHA and ANM (auxiliary nurse) workers engaged under various Central government sponsored programmes are also out of the coverage since they are officially considered "honorary workers" and paid monthly "honorarium".

There are 14 lakh Anganwadi centres in India employing one or more Anganwadi workers (AWWs) and Anganwadi helpers (AWHs). The ASHA workers number 10.47 lakh.

Taken together, the total number of workers to be left out would be more than 100 million.

When it comes to working hours, the new system undermines 8-hour working day.

The draft rules 2020 speak about 8-hour work schedule but provides "spread over" working time to 12 hours in Rule 6(2) in normal times, even while saying that a maximum of 1-hour rest can be given, taking the total hours of activity and attendance to 9 hours in day.

In case of "emergency", "preparatory" and "complementary", Rule 9 says the "spread over" time can go up to 16 hours, without explaining what these words mean but saying that "either physical activity or sustained attendance shall not exceed 9 hours in any day". Who will check since the physical inspection has been done away with?

This would mean no wage for Sundays, usually the weekly rest day, because Section 3(2) says the monthly rate will be fixed by multiplying daily wage with 26.

The Wage Code Bill, 2019 says minimum wage will be fixed on the basis of skills, nature of job (hazardous, arduous etc.), temperature and humidity etc., but does not spell out how it will be linked to a minimum standard of living for the workers.

The draft rules 2020 does that, retaining existing provisions of 2,700 calories per day per adult, and other requirements like housing rent, education, health and other expenses for 3 adult units (as against 3.6 units the labour ministry's internal committee had recommended). But the requirement of 2,700 calories per day per adult is missing from "fixing floor wage" below which no minimum wage can be fixed.

The minimum wage is to be revised "ordinarily at an interval not exceeding five years" - both in the Code and the Rules - unlike dearness allowance (DA), which the draft rules 2020 say would be computed twice every year, once before April and October 1.

An ILO discussion paper of August 2020 says such discrepancies in revising minimum wage and DA have cost wage workers dearly for 72 years. States would just revise DAs and leave minimum wage alone for years. It gives the example of Delhi and Maharashtra governments which revised their basic wage rates after 22 and 9 years, respectively, but got away because by revising DA, the overall minimum wage is also revised which short-changes workers by denying them adequate compensations.

Just like the other three codes - Industrial Relations Code of 2020, Occupational Safety, Health and Working Conditions Code 2020 and Code on Social Security 2020 - the Code on Wages 2020 is disappointing in its design to achieve what it promises to.