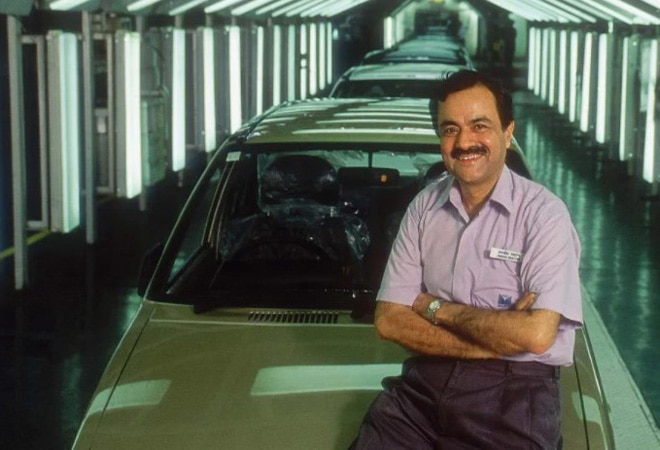 (Rupturing of breath is an everyday sport; Only when a friend departs do you call it death)

Many a men devote their life to occupying centerstage, playing savior and trying to become a legend others would follow. Jagdish Khattar (JK) was a rare breed-- a silent achiever, a warm human and an ever-helping hand.

His love for his children was seldom explicit, but it was always unconditional. Whenever his grand kids would make an entry, it would visibly light up his soul.

He was also a great son to have. Even during his firefighting days at Maruti, JK would religiously step out once a week to have lunch with his parents -- over an hour of travel time for 15 minutes with his Babaji and Ammi. His father, who had an expansive vocabulary of experiential anecdotes and Urdu verse, would often beam when his Gullu's achievements were mentioned.

Stretching the boundaries was his dream and the sole passion that drove him. He worked towards achieving satisfaction of a good job collectively done, under all kinds of circumstances.

Coming from the illustrious family of Rai Bahadurs in North Western Frontier Province, where they generated and distributed electricity, the family had to establish new roots in Delhi, post partition.  In lieu of their holdings, the family was compensated with a house in Delhi and meagre 400 acres in Gurgaon. Fate, however intervened, to ensure that he shed even those reduced familial trappings.

While studying in Delhi Public School, Mathura Road, classrooms would often lose their roofs to fierce storms, and they would study in tents. These and such learnings shaped him to take on the unexpected and remain calm even under stressed circumstances.

When he was 10, JK was chosen to play a lead role in a big movie called Son of India, later renamed as Gandhi Path. The movie was about how learnings from Gandhi improved the lives of many. Thereafter, he was also offered roles in Jagriti and Boot Polish. However, his father's refusal probably aborted a promising film career.

As an impressionable child JK rehearsed dialogues about Mahatma's principles for nine months in Siriska Palace, Alwar. It left a sense of simplicity and no-nonsense approach to his daily living. This transformed a Jagirdar's young grandson into a practitioner of leading from behind, austerity, simplicity and gentle humaneness. He never allowed either his position or magnitude of the task to overwhelm his equanimity.

He was selected as an Indian Foreign Service Officer, but the overwhelming temptation of making a difference to a famine, drought and poverty ravaged new nation was too powerful a calling to ignore. So, he opted out and landed himself in the IAS. It is pertinent to recall that in 1965, India was a PL-480 dependent nation and two wars had ravaged its economy and one its self-pride, too.

As a child, when served with karela and paneer on the same dinner plate, his mother would insist that he negotiate the karela before eating the paneer. This cultivated a lifelong habit in him, of fearlessly diving in at the deep end of any problem, first.

As an SDM in Basti (UP) he learnt the revenue ropes by sharing the lunchroom with his junior staff and playing badminton with them in the evening. They were glad to steer him through the nuances of many a complicated case. This taught him that merit was always a better teacher than seniority. As a District Planning Officer, he cultivated an important habit of leading from the behind, providing others encouragement to succeed. He would dissect any problem into micro modules and then regularly monitor each for their individual progress.

Learnings from these two postings came to his aid when he had to steer the sinking ship of Maruti and get it ocean bound again. Not only did he focus on regions, or markets but monitored and identified problems of each individual dealer and then incentivised them to perform at their peak potential. Small wonder that Maruti, whose market share was once down to 35 per cent slowly clawed up its way in an expanding marketplace, despite a paucity of new models, back to over 50 per cent.

Maruti remains the only car company in the world that enjoys an over 54 per cent market share -- the foundation of which, came to JK, from inspiration and learnings from managing Indian villages.  For his flood relief work in Chamoli, his name was recommended for Padma Shri, an honour that escaped him as he was considered too young to receive it. So, at 29 years of age he had to make do with the much-needed Rs 1,000 award on the Republic Day instead.

JK began the first development work for setting up of NOIDA, helped HCL get its first government loan, turned around two sick UP corporations dealing with cement and transport into cash positive within the first year, despite carrying a history and baggage of losses for many. In each of these assignments, clarity of vision and a positive approach to solving the problems came in handy. These learnings were to pay him vast satisfaction dividends in Maruti.

JK was always a quiet and contrarian rebel, but with a vision. He asked to be appointed Joint Secretary in plantation, but got steel instead. He floated the idea of raising loans from development financial institutions for PSUs like Vizag steel plant but would not stay in the five-star guest house there, opting to stay in the barracks, since they were closer to the beach. He was also at the forefront of liberalising pig iron manufacturing in India long before 1991. His efforts to privatise IISCO were nearly completed when they got thwarted by the left parties in the parliament.

In each job, he took, in each assignment he was given, he left a mark of simple, quiet and industrious achiever. It was for this track record that he was chosen to be groomed to succeed Bhargava in Maruti. And he left a promising career for a turbulent future, as next few years would unveil.

When JK lost out to parochial politics in the race for Maruti MD, he was even more determined that it should succeed. Sometimes he would drop in on his way to the factory. Once when I asked him, "What now?", he asserted that Maruti needed him even more now as it slips faster, without new models and a competition biting away its market share. I saw no remorse, no anger, just a simple clear headed resolve. That was JK -uncluttered and focused. There was no room for personalities to cloud issues.

As Director Marketing, JK was committed to serving the Maruti customer better. He, against all opposition, opened up the market and invited more non-VIP dealers. Later, when he was made in-charge of materials, he for the first time rationalised the purchase price from all vendors. Cutting cost and better customer service became his mantra. This built the company's competitive spine.

His appointment as the MD of Maruti was welcomed with a lightning strike, increasing competition and rising losses. With limited means, he tried to optimise whatever was available. His far-reaching measures and the accompanying success made him known as 'Maruti turnaround man'. Many CEOs from the automobile industry across the world would meet him to hear the reasons for this indigenous success. He would always complement his erstwhile colleagues Senga san and Kobiyashi san, for being so patient while teaching him.

I recall Manohar Joshi having called him and asked him to oppose Maruti's divestment. He replied dignified, fearless and respectfully that as the MD of Maruti, his commitment was only to protecting the company's interests and he was not mandated to playing sides with any of the shareholders. The minister hated him.

The year 2001 was perhaps the worst time in India, in a long, long time. Bad news rained like monsoon through the year, Ketan Parekh scam, suspension of UTI's US-64 scheme, Indian markets losing over one lakh crore of small investors, Twin Tower attack followed by terrorist attack on Indian parliament. The world was in recession and Maruti had to raise funds for divestment.

Under such dark clouds, JK led the Maruti global roadshow. He went and met all major funds in US, Europe and Asia. He was invited to present to a family managed and very prominent US Fund. They were considered as opinion leaders in the overseas investment markets. After the presentation, the father- an old man, asked JK how much stock he owned in the company. When JK replied none, the old man was shocked. He asked how come he had so much passion for a company that he didn't own. And then told his son that their fund must begin to look at India as a market, if they have such a breed of CEOs managing companies. The Indian stock market was hovering in low 3000s then. The unprecedented Maruti IPO success proved all financial analysts and business journalists wrong. The Indian market has never looked back, since.

Once he hung his boots at Maruti, he was a new man. Turned an entrepreneur at 65. As we discussed his plans, I asked him, "What more do you seek to further achieve?". He replied innocently that he had been racing on a treadmill to someone else's command. Now was the time to discover how to set up the system that serves the consumer better, which the big companies are constrained from doing. He now could do something for the country-create jobs while scaling up the quality of expectations of an auto customer. The fun, he said, was in starting afresh. Little did he know.....

He learned that ease of doing business in India was optics and that failing here was not an option. In a way that left him humiliated, shocked and friendless. Of course, there were men like Amitabh Kant, an officer fifteen years' junior, who reached out to help. There was Jug Suraiya, a journalist who defended him without much acquaintance. Rahul Khullar, a ten years junior colleague, anguished in support. There were others including in the Industry, like Anand Mahindra. But fingers were too many to keep count of such support.

Having lost out, he remained undefeated. His concern moved back to rural India and commuting there. He began to champion the cause of bicycles as a clean, cheap and efficient way to dispel gender biases in rural India. The new crusade began to drive him. He was very happy that a young IAS officer in his home cadre, Vikram Malik, had converted migrant's discarded bikes to a creative and just rural transportation solution. India has immense potential, he said, as though scoring a point. The passion, I realised, had returned to his eyes and the eagerness was back in his voice. He had rediscovered and redefined himself.

It is then that it was decided that his work here was over. He received a call on the morning of 26th April, his wedding anniversary, with an offer even he couldn't refuse. That it came with an incentive of being with his parents and the added hope of tweaking a few rules where he was headed, may have added to the allurement.

I am reminded of Gulzar's lines for R D Burman:

(Neither did the train arrive nor was it due to arrive; And you took two steps on to the fog, and just went away!)

Farewell, my friend.... We can now afford to reduce the size of measuring tapes. They won't be making men as tall as you, anytime soon.

Can a global minimum corporate tax be a game-changer for India?