Coronavirus in India: Current market fall can be a best buying opportunity for investors

Among equities, one can adopt a barbell strategy, i.e., own a mix of high-quality growth stocks at the one end and buy beaten down 'relative value' or 'mean reversion' plays such as Corporate Banks, PSU companies, Pharma and Utilities at the other end

In the current situation, the stock market fall, in the global markets and India, is mainly on account of Fear of the Unknown
Unmesh Kulkarni

The world has suddenly become a different place in the last two months, with Coronavirus or Covid-19 taking a host of nations by storm.

It all started with China, and for some time the rest of the world was looking at China, the most populous nation of the world, with curiosity, at what had suddenly erupted within the region. While China was battling with the fast-spreading virus and the Chinese markets started tanking, other markets (including India) initially distanced themselves from the problem, considering it topical and restricted to China and a few other Asian countries.

Markets in the US, as well as India, were quite resilient for some time. Corporate India seemed to be quick to draw conclusions about how some Indian companies and sectors could benefit from trade and manufacturing orders potentially shifting out of China to other countries, including some to India. Little did anyone anticipate that in a few weeks our country too would need to contend with the virus.

The scenario changed, however, when, totally unanticipated, the virus engulfed the world and WHO declared the Covid-19 as a pandemic, followed by various countries issuing travel bans, emergencies, lockdowns, and other restrictions. Capital markets across the world tanked miserably.

The market fall has been a financial tsunami that has washed away faith and stability in spite of a slew of liquidity injection measures announced by central banks across the world.

The speed with which markets nosedived shook the earth, this intensity has never been witnessed by market participants in the last 3 decades or so. Some likened the current crash to that of 1987, when many young traders who are currently thronging their screens in despair and frustration were not even born.

March 2020 will be recorded in capital market history as an unforgettable month.

That markets dislike uncertainty is well known and whenever they sense that coming, they shed some weight. Looking back at some of the major stock market corrections in India, most of them were driven by financial market excesses or economic disruptions of some sort, with a prolonged impact on the market sentiment. And along with the global market correction, Indian markets too paid a heavy price on every such occasion. 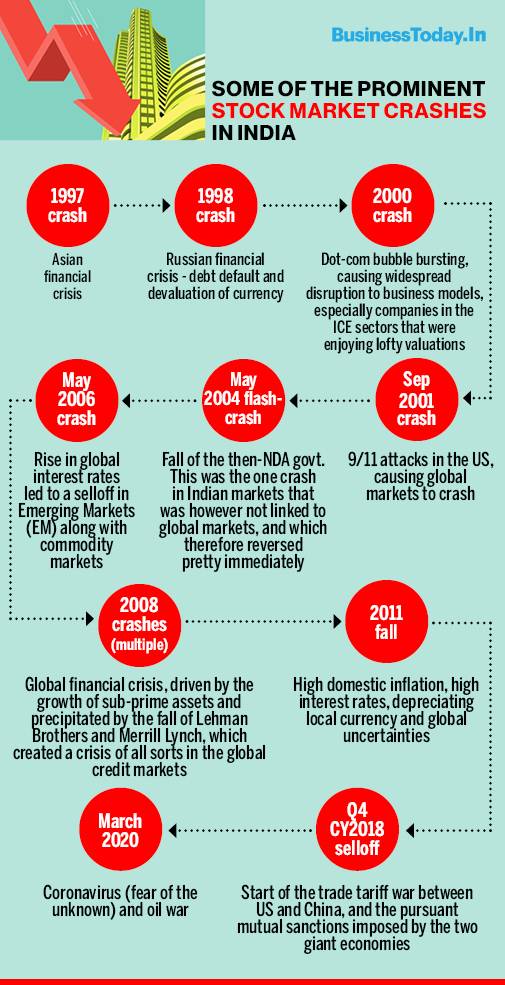 Fear of the Unknown

In the current situation, the stock market fall, in the global markets and India, is mainly on account of Fear of the Unknown. How much can the situation aggravate, how effectively will countries respond in containing the pandemic, in how much time, and the extent of debilitating effect this entire situation will have on economic activity, trade, and demand.

Some cracks are already visible in growth slowdown due to large-scale travel restrictions, the commencement of lock-downs in multiple countries and a curtailment of outdoor activity.

The market fall this time around has not been driven by any actual financial crisis or economic event. Yes, true that for some time the US markets (and even Indian markets) have been hitting new highs, despite expectations of global growth slowing down, and in India's case, economic growth as well as earnings growth being in a prolonged lull phase.

While earnings growth in the US has been on a high all this while, thereby supporting the case for an extended bull market, in India however, unlike in some of the previous cycles, the earnings cycle has been in a bottoming-out phase and not in a peak-out phase.

This brings us to believe that Indian markets should respond favourably once the dust settles, the fear and the panic subsides and human and economic activities are restored.

All relevant authorities (global governments and central banks) are aware of the necessary measures they need to take. The duration of the shock should be limited and followed by a sharp recovery in H2CY20, which will be mainly driven by pent-up demand. The current sell-off should be viewed as a buying opportunity.

What has complicated the global scenario is that amid the virus fear and panic, an oil war has broken out amongst oil majors, with talks breaking off between Russia and the OPEC, and Saudi Arabia swiftly dropping oil prices and announcing an increase in production, with the intention to throw US shale companies out of gear.

The consequent 30%+ fall in oil prices has roiled the global markets as if the coronavirus panic was not sufficient pain.

So what will change the market mood?

Clear visibility of containment of corona cases, incremental incidents falling and the spread of the epidemic reducing. While government and central bank actions will serve as palliatives, the stock markets, currently gripped with fear, will want to assess the overall damage to the economic activity and demand, and this will be clear only once there is a tangible improvement in the corona situation.

Until such time, however, markets may continue to be volatile and susceptible to daily news-flow and hypothesis with respect to the pandemic, a stage which possibly traders and arbitrageurs will dominate.

What should Indian investors expect from the markets?

Firstly, take the market fall seriously. Markets are worried due to lack of clarity on the immediate way forward. With efforts around containment rising drastically across the board since the last few days, if the corona situation comes under control soon, we could see the markets retrace some lost territory. Else, we stand the risk of markets slipping into a longer bear phase.

Economic recovery and earnings growth in India are likely to be a bit derailed, as the corona scare has a real impact on economic activities in India - travel, tourism, hotels, manufacturing and services having global dependence and now even the larger corporate sector starting to scale down operations and productivity with work-from-home contingencies triggered.

Moreover, structural issues still persist, although improving on the margin. The financial sector has been rocked by one scandal after another, shaking the confidence of investors as well as lenders. For a sustained economic recovery, it is imperative that credit growth picks up.

Some green-shoots are however visible

The recent fall in oil prices is beneficial overall for India's current account, as we are a net oil-importing country. Even if a settlement is reached among the oil majors, it looks pretty likely that the average oil price for this year will be lower than the previous year. Though one must keep in mind that very low oil prices would also mean a lower global economic growth which could adversely impact India's exports, remittances from overseas as well as FPI flows.

A lower current account deficit and lower imported inflation will provide the necessary legroom to RBI to be more liberal with monetary policy. The RBI is anyway committed to maintaining sufficient liquidity, and given the prospects of a delay in economic recovery, a rate cut in the near-term cannot be ruled out.

Global central banks are fast acting to provide liquidity, through rate cuts, purchase of bonds and now a cut in reserve requirements (China). This should hopefully provide some cushion in the current volatility and reduce panic among investors.

Valuations of Indian companies were on the higher side for quite some time, given (a) lack of earnings growth and (b) flight to quality large caps, making a part of the market quite expensive. The recent fall seems to have corrected valuations of several companies, presenting an attractive entry point for long term investors.

And unlike in the previous market falls, the earnings cycle of Indian companies (prior to the Corona shock) was on a path to recovery and not peaking out. The current re-rating of the market is factoring in the possibility of some growth being shaved off owing to the virus effect; but post that, markets will look for growth starting to recover towards the second half of the coming financial year.

While investors should be cautious to prepare for the long haul, not to rush in (should things worsen from here), a 'buy on dip' strategy may be suggested, given that valuations are far more reasonable now than a month back. Investors should stay within the discipline of their asset allocation and use the market falls for portfolio rebalancing. Any excessive leveraging is best avoided in such times.

If we look back into history, we find anecdotal evidence to suggest that very sharp market falls do present an attractive opportunity for long-term investors to accumulate equities in their portfolios, provided they are willing to extend their investment horizon and ride out the intermittent volatility. Nifty fell by more than 8% on 12 March 2020, depicting the panic and fear on the street. As seen from the table, barring a few exceptions, such sharp falls of the Nifty (6% or more in a single day) in history have usually been followed by a meaningful return over 1 to 3 years.

Among equities, one can adopt a barbell strategy, i.e., own a mix of high-quality growth stocks at the one end and buy beaten down 'relative value' or 'mean reversion' plays such as Corporate Banks, PSU companies, Pharma and Utilities at the other end.

Among mutual funds, allocation to large-cap and multi-cap funds in the current fall is a better approach and later adding mid-cap funds once the volatility reduces.

A prudent strategy would also be to use a combination of index funds or ETFs + aggressive hybrid funds and balanced advantage funds (which have partial hedge).

In fixed income, given the overall fiscal pressures as well as the fact that long-dated government securities have already rallied quite a bit, investors may explore high quality (predominantly AAA-oriented) short-to-moderate duration strategies, which will serve as a safety play (in the midst of credit concerns) + provide some scope for capital appreciation should the RBI use its monetary tools to bring down rates further at the shorter end of the yield curve.