Stock market investment is so much about speculation, driven by greed and fear
Prasanna Mohanty

The stock markets' delink with ground realities is stark.

The number of COVID-19 cases in India has seen a massive spike in the past few weeks. The total number of cases crossed the 5 lakh mark from 4 lakh in just 6 days between June 22 and June 26.

The following graph shows that on March 25, the day the national lockdown began, there were 657 cases in all. When the unlocking (unlock 1.0) began on June 1, the total cases had climbed up to 1.98 lakh. Since the unlock 2.0 began on July 1, the total number is closing 6 lakh. 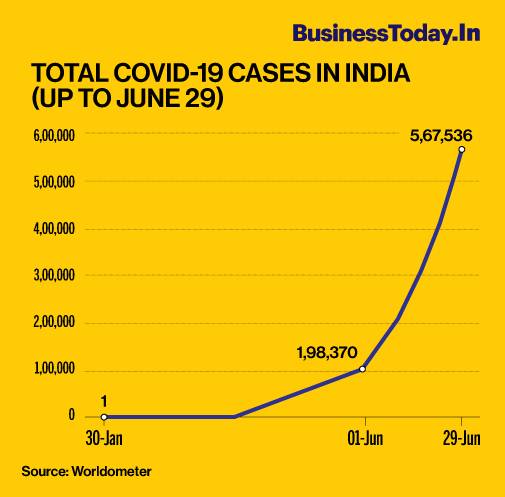 But even as India announced unlock 2.0, Maharashtra and Tamil Nadu declared to continue complete statewide lockdown for another month until July 31. Guwahati has been shut for two weeks and so are many other areas. Their decision is driven by extraordinary surge in new COVID-19 cases.

While India's decisions to go for a complete lockdown when cases were few and start unlocking when cases are rising sharply have aggravated both the health and economic crises, the reverse migration of workers has added further problems. Those who want to reopen can't do it because of their absence.

Logically, all of this would mean a severe economic shock: less production and consumption and hence, less revenue or profit for corporations. Their stock prices shouldn't be going up. But that is not what is happening.

Here is how Sensex has been behaving since January 30, the day the first COVID-19 case was detected. The disconnect between the two graphs can't be starker.

Why stock market should behave otherwise?

The logic of stock market or financial market which stock market is a part of or even markets, in general, is simple: investors (and consumers) are 'rational' and 'well-informed'; the market in which they operate is 'efficient' and 'self-correcting'.

This in essence is the "efficient market" theory (Market Efficiency Hypothesis or MEH) of neoliberal economists who would have us believe that that stock markets or financial markets always get the asset price right.

Nobel laureate Paul Krugman explained the concept of 'efficient market' while talking about the failure of economists to foresee and prevent the Great Recession of 2007-08 even after the cataclysmic experience of the 1929 Great Depression.

By 1970, he wrote in his 2009 paper 'How Did Economists Get It So Wrong?' that discussion of investor irrationality, bubbles, destructive speculation, etc. had virtually disappeared from academic discourse.

He wrote: "The field (study of financial markets around 1970) was dominated by the "efficient-market hypothesis," promulgated by Eugene Fama of the University of Chicago, which claims that financial markets price assets precisely at their intrinsic worth given all publicly available information. (The price of a company's stock, for example, always accurately reflects the company's value given the information available on the company's earnings, its business prospects, and so on.)"

"And by the 1980s", Krugman continued, "finance economists, notably Michael Jensen of the Harvard Business School, were arguing that because financial markets always get prices right, the best thing corporate chieftains can do, not just for themselves but for the sake of the economy, is to maximise their stock prices. In other words, finance economists believed that we should put the capital investment in the hands of what Keynes had called a "casino"."

How wrong the "efficient market" theorists are is evident, again, in India now.

The Business Today magazine (July 12, 2020 issue) shows a complete breakdown of the link between stock prices and business fundamentals.

The RIL, India's largest private sector company, for example, reported its steepest drop (of 39%) in quarterly profit (in Q4 of FY20) in at least a decade as refining business took a hit due to collapse of crude oil prices. The market seems to have discounted this.

British economist John Maynard Keynes, whose prescriptions helped developed economies come out of the 1929 Great Depression and then was used again during the Great Recession of 2007-08, likened stock market/financial market to "casino".

Prof Mariana Mazzuca of University College London explained why in her 2018 book 'The Value of Everything'.

She wrote: "In his (Keynes) lifetime, he observed how financial markets and public attitudes to financial trading were changing, becoming ends in themselves, rather than facilitators of growth in the real economy. When speculation spreads from a rich leisure class to the wider population, it drove the stock market bubble that ushered in the Wall Street Crash and 1930s depression; but as public spending helped to restore people's jobs and incomes, those with money again began to gamble it on stocks and shares..."

Krugman quoted Keynes, in his 2009 paper, having said: "When the capital development of a country becomes a by-product of the activities of a casino, the job is likely to be ill-done."

Nevertheless, Keynes disappears from economic discourses once the economic crisis passes. Governments go back to prop up stock markets with taxpayers' money in the name of helping the economy, even though their connections are tenuous. We have seen how stock markets of the US and India are on an upward swing even while their GDP numbers are on a downward swing.

The Economist recently explained this mismatch in the US during the current pandemic shutdown.

It said: "One reason for this mismatch between the markets and the economy is that official attitudes to financial downturns have changed a lot since Andrew Mellon, America's treasury secretary under President Herbert Hoover, argued after the crash of 1929 that downturns would "purge the rottenness out of the system". Now central banks and governments respond vigorously to economic and financial trouble, and taxpayers may bear more of the burden of the crisis than investors."

The Federal Reserve has brought down interest to near zero (0.25%). India's repo rate has fallen but not yet close to zero (4%).

Driving down interest rates to zero may not be as harmless as it may sound. Here is what economist Prabhat Patnaik recently wrote, in the context of the current stock market boom in the US, about the housing bubble that burst in 2007-08, causing grief to millions who lost their jobs and saw their savings and assets go up in smoke.

Patnaik wrote: "When Alan Greenspan was the chairman of the US Federal Reserve Board, he reduced interest rates after the collapse of the "dot-com bubble", and this had the effect, whether intended or not, of stimulating the "housing bubble", and thereby starting a new boom."

Krugman wrote on the same subject in his 2009 paper: "How did they (Greenspan and Ben Bernanke who succeeded him as the chair of the US Federal Reserve and during whose time the housing bubble burst) miss the bubble? To be fair, interest rates were unusually low, possibly explaining part of the price rise. It may be that Greenspan and Bernanke also wanted to celebrate the Fed's success in pulling the economy out of the 2001 (dotcom burst induced) recession; conceding that much of that success rested on the creation of a monstrous bubble would have placed a damper on the festivities."

Some economists, including our own Raghuram Rajan, had warned about this bubble-up, but Krugman says, "Greenspan (Fed chair from 1987 to 2006) had dismissed such warnings in 2004. Bernanke (Fed chair from 2006 to 2014) dismissed it in 2005, saying that "home-price increases largely reflect strong economic fundamentals".

Greenspan came to regret it. In 2008, Krugman wrote that Greenspan was in a state of "shocked disbelief" because "the whole intellectual edifice" had "collapsed". "That collapse of intellectual edifice (of efficient market, liquidity infusion to address recession) caused the collapse of "real-world market", Krugman said, and not just stock market.

How rational are stock market investors?

Krugman, in his explanations about how economists got it so wrong about the 2007-08 recession, pointed at "behavioural finance", as against neoliberal economics, to understand the behaviour of stock market investors better.

He wrote: "Practitioners of this approach (behavioural finance) emphasise two things. First, many real-world investors bear little resemblance to the cool calculators of efficient-market theory: they're all too subject to herd behavior, to bouts of irrational exuberance and unwarranted panic. Second, even those who try to base their decisions on cool calculation often find that they can't, that problems of trust, credibility, and limited collateral force them to run with the herd."

Stock market investment is so much about speculation, driven by greed and fear.

Next time stock market takes a hit, the government will do well to remember, before rushing in with taxpayers' money to bail it out, that its link with the real economy and well-being of people is quite flimsy.