While government claims on tax compliance and GST collections paint a healthier picture of the economy, tax-to-GDP has fallen for two consecutive years and tax collections across the board in the first half of FY21 are nowhere close to FY20, indicating that trouble is far from over

Taken together, the claims on the beneficial effects of demonetisation and higher GST collections, made in November 2020, present a rather misleading picture of the state of the economy
Prasanna Mohanty

Two significant news regarding tax collections came this month to assure Indians that the economy is headed for recovery: (i) demonetisation has improved tax-to-GDP ratio and tax compliance and (ii) GST collection crossed Rs 1 lakh crore-mark in October 2020.

The first one came on November 8, 2020, through a series of tweets by Prime Minister Narendra Modi, which was also released by the Press Information Bureau (PIB), and Finance Minister Nirmala Sitharaman. The claims accompanied a series of graphs showing all-round improvement without, however, revealing the underlying assumptions and statistics.

The PIB statement and the accompanying tweet of the Prime Minister made several claims about the demonetisation of 2016: (a) "tax/GDP ratio drastically improved" (b) "made India a lesser cash-based economy" (c) "helped reduce black money, increase tax compliance", gave a "boost to transparency" and concluded that the demonetisation (d) has been "greatly beneficial towards national progress".

Had the official databases of the Controller General of Accounts (CGA) and RBI been checked, such claims would not have been made.

The following graph maps tax-to-GDP ratio by using the CGA data on gross tax collection and the RBI's GDP numbers at market price since FY05. Tax-to-GDP ratio reflects tax compliance and also the central government's ability to finance its expenditures and hence, is critical to determine the health of the economy.

The last three fiscals' tax-to-GDP ratios were confirmed by the Central Board of Direct Taxes (CBDT) in June 2020 and widely covered by the media which confirmed that the ratio had indeed plunged to 9.88% in FY20, from 10.97% in FY19 and 11.22% in FY18 due to poor health of the economy.

Notice how the tax-to-GDP ratios take a plunge immediately after the demonetisation in FY17 and the GST in FY18. Like demonetisation, GST was also touted as a move which would improve tax-to-GDP ratios with the Niti Aayog's estimates predicting a jump from 17% in FY16 to 22% in FY23 (central and state taxes taken together) in its "Strategy for New India@75", released in November 2018.

The demonetisation and GST were the twin shocks that derailed the Indian economy. Demonetisation sucked out 86% of high-value cash in circulation in an instant on November 8, 2016 (demonetised at four-hour notice). Cash was rationed and people queued up daily outside banks for about six months to run daily expenses. More than 100 people died in these queues, millions lost jobs and other livelihood sources and it devastated the informal economy but these were never tracked or studied by the central government.

Before the people and economy could recover, there came GST at a mid-night session of Parliament of June 30-July 1, 2017, billed as "the second freedom movement" only to be postponed for two months the very next morning. (For more, read "Rebooting Economy 46: Who is designing India's growth path? ")

The claim that demonetisation made India a less cash-based economy is contrary to official data.

The following graph maps the RBI's weekly currency-in-circulation (CiC) data from November 4, 2016 - 4 days before the demonetisation - to November 6, 2020. Now that India is progressively becoming a far more cash-based economy, black money in circulation should also be going up - going by the fundamental logic of demonetisation. That, however, wasn't the case then nor now (real estate, gold , and financial instruments involve black money).

In 2012, the finance ministry brought out a white paper on black money ("Measures to Tackle Black Money in India and Abroad"). It listed the methods and most prone sectors generating black money in which "cash and use of counterfeit currency" (target of demonetisation) came at No. 6.

The world was so horrified by demonetisation that Gita Gopinath, chief economist of the International Monetary Fund (IMF) warned other countries against following this and explained to a television channel that no macro-economist would recommend demonetisation to any developing or advanced economy.

She later published a paper in 2018 (co-authored by economists from Harvard University and RBI, among others) showing India's GDP shrunk by 2 percentage points that quarter due to the cash shortage (Q4 of FY17).

Former Chief Economic Advisor Arvind Subramanian pointed out in 2018 that this"massive, draconian, monetary shock" plunged GDP for the next 7 quarters - from an average growth of 8% in pre-demonetisation quarters to 6.8% in subsequent seven quarters. Since the GDP data has been fudged multiple times, these changes can't be seen in the GDP data now. (To know how this happened, read "Rebooting Economy XXV: How a series of economic misadventures derailed India's growth story ")

It said only thrice India had witnessed more than 17% surge in CiC for three or four consecutive years until then in the past 50 years. The relevant table is reproduced below. Ironically, the post-demonetisation CiC surge happened when nominal GDP grew at less than 10% growth, while other three occasions had seen 14.7% to 16.6% growth - indicating it wasn't growth (leading to inflation) that caused it, but it happened "largely on account of remonetisation of the economy after the withdrawal of high-value banknotes (demonetisation) on November 8, 2016".

The demonetisation's shifted goalpost (cashless economy) pushed digital payments without citing evidence or explaining the rationale. Whims and fancies reigned high in the policy and planning arena then.

It was supposed to check black money generating transactions and bring transparency. But the contrary has happened - India's digital payment fell drastically post-demonetisation - as the following graph shows. It is more likely to fall further in FY21.

The PIB's November 8, 2020 statement and tweets made therein claimed improvement in tax compliance (i) "self-assessment tax of more than Rs 13,000 crore was paid by targeted non-filers" (ii) 3.04 lakh persons who deposited cash of Rs 10 lakh or more but had not filed IT returns were "identified" and (iii) 2.9 lakh such identified non-filers responded and paid a self-assessment tax of Rs 6,531 crore.

None of this requires demonetisation.

Firstly, these are routine exercises carried out by Income Tax officials.

The officials have been identifying millions of non-filers and "dropped filers" (those who stop filing returns) through the age-old Non-filers Monitoring System (NMS) that tracksannual information returns (AIRs), centralised information branch (CIB) data, and TDS/TCS statements. (For more read "Taxing the untaxed III: Is govt oblivious to leakages in direct tax collection? ")

That the NMS was fully operational much before the demonetisation is evident in the third report of the Tax Administration Reform Commission (TARC) released in 2014.

The third TARC report said the NMS had identified2.2 millionnon-filers with potential tax liabilities in 2014 - up from0.2 millionin 2013. The relevant part is reproduced below. 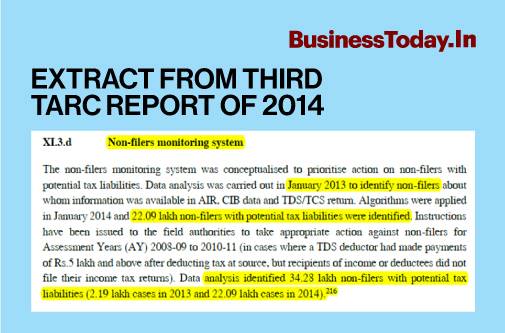 The real problem is the efficacy of the NMS - what happens next. There is no data or information to show what happened in those millions of cases. Going by the falling tax-to-GDP ratio, it is evident that the NMS hasn't worked. (For more read "Rebooting Economy XXVII: Fiscal mismanagement threatens India's economic recovery ")

As for improvement in self-assessment tax, the then Finance Minister Arun Jaitley had nailed the futility of it in his 2018 budget speech. He said the presumptive income scheme (PIS), which allows taxpayers to choose a pre-determined tax slab on their own and pay tax accordingly without having to maintain formal tax records.

Jaitley further said: "Under this scheme, 41% more returns were filed during this year which shows that many more persons are joining the tax net under simplified scheme. However, the turnover shown is still not encouraging".

That is not surprising. Tax officials have known it all along. Entrepreneurs and traders take advantage of this scheme to switch to lower tax slabs.

On September 19, 2020, Minister of State for Finance Anurag Thakur confirmed to the Lok Sabha how very few, only about 1% of Indians, pay tax.

In a written reply to a question, Thakur said: "Yes, approximately, for Financial Year 2018-19 till Feb.2020, 5.78 Crore Returns of Income were filed by individual taxpayers out of which1.46 Crore individual taxpayers filed Returns declaring income above Rs. 5 Lakh." (Finance Act of 2019 provides that individual taxpayers with income of up to Rs 5 lakh are not required to pay any income tax from Assessment Year 2020-21 onwards.)

No such data is available in the public domain to map the trend. Furthermore, whatever tax data are released, have not been updated after FY19.

Now, such statements are issued only when the gross GST collection touches the Rs 1 lakh crore mark, not otherwise. Hence, there is no way of mapping the trend. The last occasions when such statements were issued, were: January and February of 2020 and November and December of 2019.

The CGA provides some of these data for the first half (H1) of FY21, mapped below for comparison with FY20. On every single count (corporate tax, income tax, various GST components, and gross tax collections), the FY21 numbers have slipped from FY20, except for IGST.

Taken together, the claims on the beneficial effects of demonetisation and higher GST collections, made in November 2020, present a rather misleading picture of the state of the economy.