Unprecedented demand for work under the rural job guarantee scheme sees 90 million individuals finding support and 19 million more waiting their turn, but if the fund crunch continues there may not be much to look forward to While India battles a massive job loss scenario, the extent of which is not known because the central government has abdicated its responsibility to track it and take corrective measures, the state of the only effective job scheme that forms the lifeline for rural India, MGNREGS, has already lost steam.

This is bad news for rural India and the economy. It needs immediate attention as the country struggles to recover from the pandemic-induced crisis for a setback to the MGNREGS would adversely hit rural demand and delay the recovery.

A scrutiny of the MGNREGS database reveals many shocking details.

As on November 3, 2020, many big states have exhausted their MGNREGS funds and the gap between the total funds available and total expenditure on wages, materials and administration of the scheme has risen to Rs 2,136 crore.

Four states, Telangana, Karnataka, Bihar and Andhra Pradesh, have recorded a gap of more than Rs 500 crore each.

The following graph captures the financial status of some of the big states, based on the MGNREGS database. 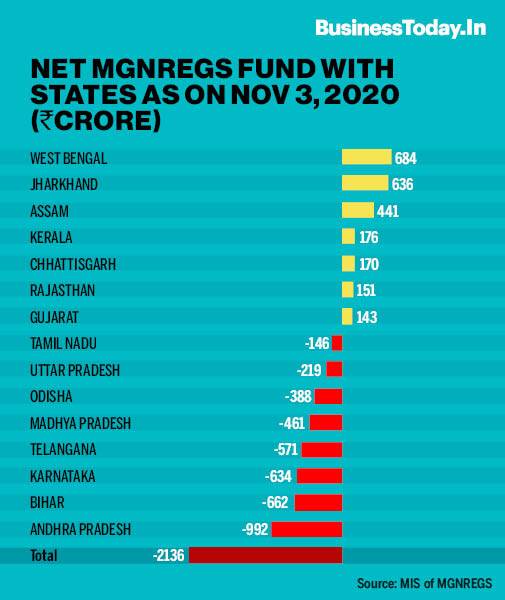 While it is understandable that Kerala and Gujarat would have surplus funds at this time of the year because these are low-MGNREGS demand states, more so during the harvesting season, what should be worrying is the huge surplus with West Bengal, Jharkhand, Assam, Chhattisgarh and Rajasthan - home to a large number of poor needing the MGNREGS lifeline.

This is 65% of the total shortfall in the MGNREGS fund with states. 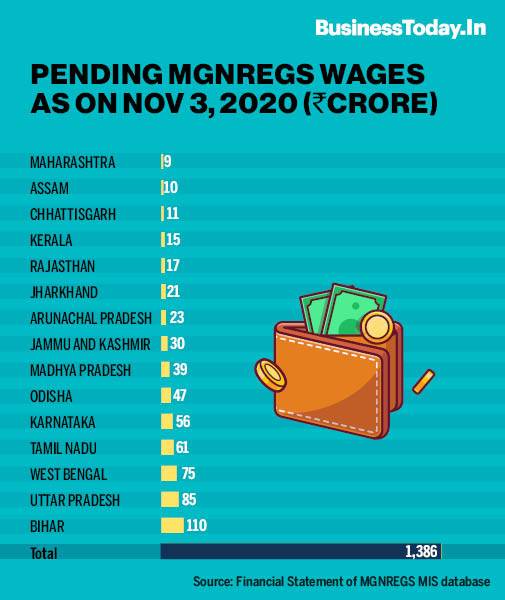 The lack of funds is particularly distressing given that India is struggling to recover after a massive drop in the first quarter GDP growth (by minus 23.9%). India's growth prospect for the entire fiscal also remains grim (minus 10.3% and minus 9.5% as per the IMF and RBI estimates, respectively).

Given the fact that much of the economic crisis is on account of the untimely, unthinking and unplanned national lockdown (social and economic) announced on the night of March 24 with a four-hour notice, the central government owes it to the people and states to provide immediate support.

Unless the central government releases the remaining Rs 26,072 crore (Rs 101,500 minus Rs 4,431 minus Rs 70,997 crore), a large number of states are unlikely to sanction new work or pay pending wages any time soon.

Simultaneously, the unmet demand has shot up too.

The following graph maps the worst performing states where the unmet demand has gone up very high. The cases of Uttar Pradesh, Madhya Pradesh and Odisha are particularly worrying given that these backward states have a large number of poor. Analysis of the official data extracted at different points of time during the pandemic shows that after an initial high the unmet demand went down in August and September but has risen sharply in November. 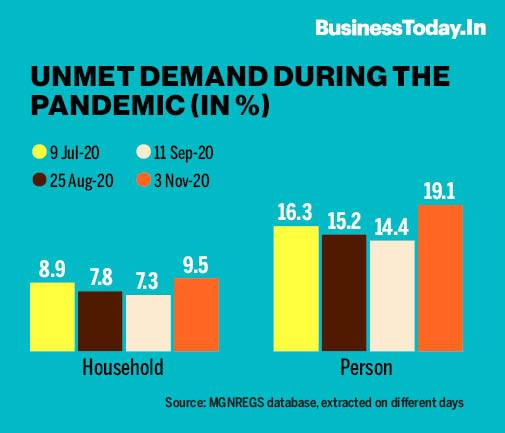 The MGNREGS is a demand-driven programme under the Mahatma Gandhi National Rural Employment Guarantee Act of 2005, which gives a statutory guarantee to provide work on demand. If no work is given for 15 days, all those demanding work are entitled to unemployment allowance. This provision remains on paper, unenforced even during the current crisis.

It is also shocking to note that despite the current crisis and high demand for work, the average number of days of work given under the scheme is nowhere close to earlier years. So is the case with households completing 100 days of work. The good news, however, is that during the pandemic, the number of those completing 100 days of work is going up. The significance of the scheme, which provides manual work, would be clear from the number of beneficiaries.

The official data shows, as on November 3, 2020, 63 million households and 90 million individuals have worked under the scheme during the current fiscal year.

The numbers for earlier years are no less gigantic. In the past few years, households benefiting from it have ranged 51.2-54.8 million and individuals ranged 76.7-78.9 million. As the above graph shows, the numbers are steadily rising, indicating lack of better paying jobs.

The MGNREGS is a very low-paying work, less than even the minimum wages of states. The central government's rate, after a raise of Rs 20 announced in April 2020 as economic relief for massive job losses, went up from a mere Rs 182 to Rs 202.

That the allocations for the scheme need to go up substantially to the current level is not in doubt. It remains a mystery why this did not happen in the past.

Right from the beginning of it in 2005, economists and experts argued for far greater allocation given the rural distress and wide-spread poverty. Rinku Murgai of the World Bank and Martin Ravallion of the Georgetown University had argued then that it should be around 1.7% of the GDP.

In their January 2005 paper "Employment Guarantee in Rural India: What Would It Cost and How Much Would It Reduce Poverty?" they reasoned: "At the current statutory wage rate, the scheme may helpreduce rural poverty to 23 per cent(30 per cent year-round), at a cost of1.7 per cent of GDP."

The current economic crisis and lack of proper policy or strategy on employment generation make it even more important that the MGNREGS gets the maximum fiscal support from the central government.

Risky Business: Why companies must insulate against rising geopolitical threats