As the stand-off between the farmers and government endures and Punjab farmers are sought to be discredited, the most significant measures of success in agriculture are forgotten: farm income and food security. The efficacy of the three new farm laws will have to be tested on these parameters.

Here are some relevant agricultural statistics.

Punjab farmers head and shoulders above in income

The last assessment of the income of farm households was carried out by the now-defunct National Sample Survey Organisation (NSSO) in 2012-13. The previous one was a decade earlier in 2002-03.

Why no such estimation has been attempted since 2012-13 is a mystery, especially when the government announced doubling farmers' income by 2022 in 2016 and the Niti Aayog duly published a strategy and action plan in March 2017. The Ashok Dalwai committee on Doubling Farmers' Income (DFI) was also set up for this purpose, which went on to produce 14 volumes of detailed analysis and recommendations, starting with 2017.

One of its reports analysed unit-level data from the two NSSO findings of 2002-03 and 2012-13 to map farm household income in states and also its growth. Here is what it revealed. (The states have been selected for representative purpose, and relevance to current discourse.) What the graph shows is that Punjab's farm income was found to be the highest on both occasions.

Their income was3.3 times more than Bihar's in 2002-03and4.9 times in 2012-13. The Bihar reference comes as several economists and experts have argued that Bihar registered higher agricultural growth than Punjab in recent decades because it dismantled MSP (Minimum Support Price)-based public procurement at APMC mandis in 2006.

The analogy with Bihar is not appropriate since both states are in different stages of agricultural growth - Punjab at the top in productivity and Bihar at the bottom - just as India's economic growth numbers (GDP) are never compared with that of the US or other "developed" economies.

What did the growth in farm income show?

The Dalwai committee mapped the growth in income of farm households too (constant prices, 2011-12), which showed Punjab's farm income grew at 3.2% while Bihar's shrunk to minus 1%. The only other major state giving Bihar company was West Bengal with a negative growth of 0.72%.

This period (2002-03-2012-13) is when Bihar should have recorded higher income growth because it dismantled the APMC mandis in 2006. Ironically, Bihar still goes for public procurement at MSP. In 2019-20, 1.34 million ton (MT) or 2.6% of total rice was procured from Bihar by the FCI. Had open markets been useful to Bihar farmers, the public procurement should have been stopped altogether.

Here is another sobering fact. There was yet another estimate.

The National Bank for Agriculture and Rural Development (NABARD), the apex body of finance for agricultural and rural development which is fully owned by the government, estimated income of farm households for the first time during 2016-17. This report was released in 2018.

The NABARD survey defined a farm household as one receiving more than Rs 5,000 per month from agricultural activities with one member self-employed in farming. The cut-off for the NSSO survey of 2012-13 was Rs 3,000.

The result was no different.

Punjab was still at the top and Bihar at the bottom. The following map scales up the NABARD's monthly estimates to annual for easy comparison with the Dalwai committee estimates based on NSSO numbers. Not all income is from agricultural activities

There is a significant share of wage labour (working on daily wages) and non-farm activities. The NSSO's 2012-13 survey estimated this share to be 40% at the national level. The following graph shows such share in the states presented earlier. 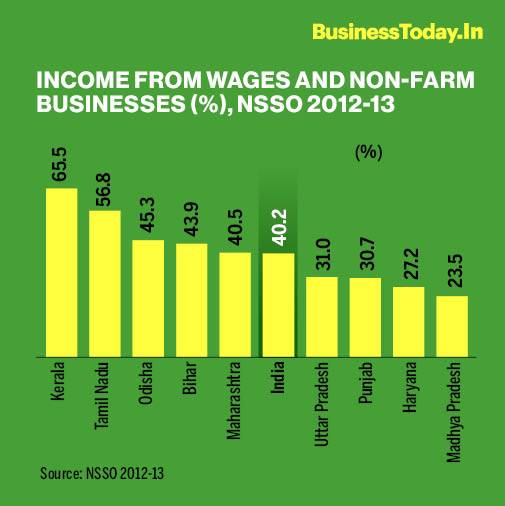 The NABARD's 2016-17 estimates showed the share of wage labour and non-farm business had gone up substantially in 2016-17 - 57% at the national level. Wage labour contributed 34%, next to 35% from cultivation.

Punjab head and shoulders above in food grain productivity too

The following graph maps productivity (yield in kg per hectare) levels in states for food grains (Kharif and Rabi) - wheat, rice, maize, millets, pulses etc. - from the latest Agricultural Statistics at a Glance, 2019. 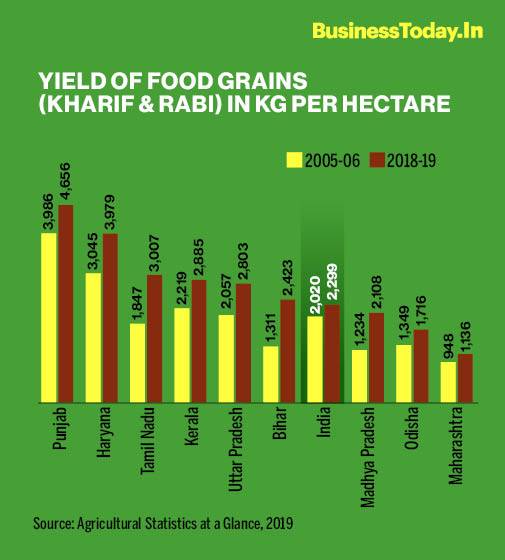 Bihar is nowhere close to Punjab in productivity.

The Agricutural Statistics at a Glance, 2019, does not provide productivity data for other agricultural produce - oilseeds, fruits, vegetables, plantation crops, spices etc. - though it provides the area and quantity produced in each case, like potato, onion, coconut, cashew, garlic, ginger, turmeric, cardamom and pepper etc.

Several other factors influence productivity, two of which are per capita landholding and irrigation coverage.

In landholding, Punjab tops with its average per capita landholding at 3.6 hectares (ha), while the national average is 1.08 ha and in Bihar's 0.39 ha. In irrigation, Punjab again tops with 98.9% offood grain producing areas under irrigation. Haryana at 95.2% is next, followed by Uttar Pradesh (80%), Bihar (70%) and Madhya Pradesh (58.4%). These data don't reflect total crop area under irrigation, in which Punjab and Haryana are miles ahead of other states too.

Higher productivity is why Punjab and Haryana (earlier part of Punjab) generate high surplus that fills the PDS system, gives meaning to the National Food Security Act of 2013 and fed millions of people during the pandemic-induced lockdown.

The FCI provides public procurement data on wheat and rice for 2019-20. Here are the states that contributed the most. Interestingly, when it comes to rice or wheat, Punjab and Haryana (which was earlier part of Punjab) don't produce the most.

Preponderance of small and marginal farmers in West Bengal (96.2%) and UP (92.8%), compared to Punjab (33%) is the reason for that. Most of the food grains produced are consumed (for subsistence). (For more read "Rebooting Economy 52: The unfinished agenda of land reforms nobody talks about")

That selling agricultural produce at MSP has been good to farmers is evident in Madhya Pradesh also. The state not only actively promoted public procurement for several years but also gave bonus over and above MSP and gradually emerged as a major state in procurement at MSP (third in wheat procurement in 2019-20).

Madhya Pradesh had launched the Bhavantar Bhugtan Yojana (BBY) in 2017 to compensate farmers who did not get the MSP price for nearly a dozen crops like soyabean, groundnut, sesame, maize, pulses etc. The scheme was discontinued after the regime change in 2019 and yet the state continues to buy mustard, chana, arhur, moong etc. at MSP (for supply through PDS or selling to NAFED, the apex marketing cooperative for agricultural produce), to ensure farmers get fair and remunerative prices for their produce.

Here is a study by the University of Pennsylvania, US, that looked at three different agricultural market systems in Punjab (regulated), Bihar (unregulated) and Odisha (partially regulated) for their efficacy. The study, "A Study of the Agricultural Markets of Bihar, Odisha and Punjab", collected data for 2018-19 and published its findings in mid-December 2020.

The study also showed that unlike in Punjab, most farmers of Bihar and Odisha sell little in regulated APMC mandis.

For five crops of paddy, wheat, maize, mustard and potato, Punjab farmers sold 75-97% of produce in the APMC mandis, but Bihar farmers sold just 3-9% in mandis (unregulated and dilapidated the old/discarded APMC mandis that still exist and some amount of public procurement is carried out) and Odisha farmers 20-35% (rest sold at farmgate to traders and private companies or local haat).

The study concluded that "those who have access to the public procurement machineryunequivocally benefit both from a higher price and lower uncertainty in their incomestream".

About Bihar's agricultural market system post-2006 dismantling of the APMC system, it said the infrastructure has "deteriorated" because "private commission agents and traders do the minimum required to keep operations running", that is, private investment hasn't happened.

Another study and official reports have also confirmed that post-dismantling of APMC, market infrastructure in Bihar worsened due to lack of private investment. In 2019, the National Council of Applied Economic Research (NCAER) said private investment in creating or strengthening marketing facilities "did not take place in Bihar" and since public procurement continues to be low farmers are left to the "mercy of traders who unscrupulously fix lower prices". It said inadequate market facilities and institutional arrangements "are responsible for low price realisation and instability in prices" in Bihar.

All these are evident in a string of newspaper reports this month. Market price of paddy crashed at least 15 states in November 2020, Bihar farmers continued to complain about being forced to sell paddy at below the MSP price because local traders are unwilling to pay the MSP price and public procurement is invariably delayed and low, forcing many to divert their paddy to Punjab's mandis for better price realisation.

It is largely forgotten that Punjab was the land ofGreen Revolutionwhich ended India's food crisis of 1960s and 1970s, making it AatmaNirbhar in food. It continues to contribute the most to food security programme which played a critical role in feeding millions of people during the pandemic-induced economic (and social) lockdown.

Why the Green Revolution happened in Punjab is well known: pre-independence British era investment in Punjab's agriculture, far superior irrigation coverage, higher per capita landholding, and, not to forget, the hardy Punjab farmers, among others.

It did have several adverse impacts on Punjab though.

Its soil and water are polluted due to the excessive use of chemical fertilisers and pesticides that high-yield hybrids brought in or developed locally during the Green Revolution entailed. That was the national policy pushed by the government and agricultural experts. The adverse impact of chemicals was realised decades later, which led to the official promotion of organic farming.

Paddy cultivation in Punjab has also led to rapid depletion of ground water because it is a water-intensive crop.

That was again the Indian government's policy to ensure food security. Paddy was never a major crop in Punjab. In 1973 (triennial ending), it was grown in just 7.1% of cropped area, which increased to 36% in 2013 (triennial ending) and expanded since. A 2019 study by the Columbia University found 25% increase in rice production during 2002-2016. Does MSP-based public procurement play a role in this? Yes, public procurement provides an assured and higher than market price.

To check groundwater depletion, Punjab (and Haryana) introduced a new law, The Punjab Preservation of Subsoil Water Act of 2009, which delayed paddy sowing and transplantation by a month to coincide with monsoon rainfall.

Ironically, that delay in sowing and transplantation of paddy led to delayed stubble burning which overlaps with the worst possible air pollution time in Delhi and NCR (to later October to mid-November). Punjab farmers are ritually demonised every year for polluting Delhi and NCR air since then, although air pollution continues to be severe even in late December every year and other times. (For more read "Rebooting Economy 40: Why Punjab farmers burn stubble?")

Demonising Punjab farmers for protesting against the new laws to protect their interests (farmers from Haryana, Uttar Pradesh, Rajasthan and other states too are protesting) is unlikely to help in reversing any of the ill-effects of the Green Revolution or ensure India's food security.

On the contrary, it may lead to far bigger problems: jeopardise food security and worsen agricultural crisis.